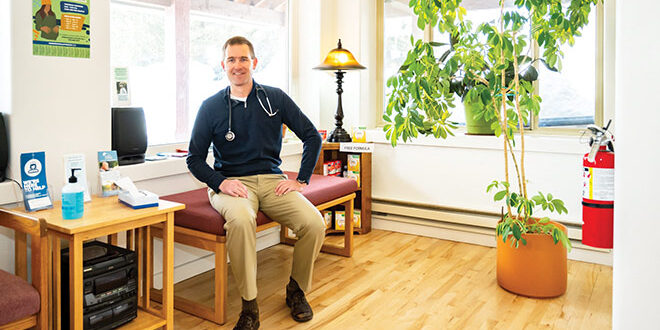 The Doctor is in

Dr. Eric Thorson followed in the footsteps of the medical family he was born into in Fort Collins. Even though his parents had busy practices, his mom being a physical therapist, and his dad a family physician, they made time to have meals together and enjoy family outings and activities. “Dad would come home late but we always made time to spend time together as a family, it was important for us,” he smiles.

As a kid, he did all the usual things Colorado kids do, riding bikes in the summer and skiing in the winter. “I first learned to ski around five years old,” he says. “We had just discovered Beaver Creek, which had just opened, so on most of our breaks we’d drive into Avon and cram ourselves into a small hotel room. Dad was always obsessive, so we always tried to get the first chair up and then the last chair.” Young Eric pretty much followed his older brother around the mountain, eventually progressing to moguls. “It wasn’t as extreme as here (in CB) but it was a good learning area for sure.”

During his childhood, Fort Collins wasn’t as developed or congested as it is these days, Eric recalls, and there was much open space with cow pastures around his home. “You could see Longs Peak right from the house,” he says, before the development of the area blocked that view. “We played in the fields, played football, rode bikes and built tree houses.”

Eric’s mom was an avid hiker so summer fun for the family included that, although, he tells that his mom was not much of a camping fan so it was just the boys of the family who participated in that activity. “The other thing my dad was obsessed with was playing golf. I started to get more into it in junior high and high school, so summer months we’d be out at the golf course.” Eric joined his high school golf team.

Throughout high school academics were a priority for Eric, although he also played tenor sax in band. “I was into jazz, so I was in a couple of school jazz bands,” but that came with a caveat. “We were required to be in the marching band. There were a couple of November football games where it was freezing cold and I didn’t enjoy that.” Eric graduated in 1996.

Eric had enjoyed the sciences in high school and notes that, “One of the most beneficial courses was anatomy and it pushed me in that direction so I thought it was what I wanted to do long-term.” He enrolled at CU Boulder in the molecular, cellular and developmental biology program determining that if he didn’t go on to medical school he could work in biotechnology. “It’s a pretty intense program for sure. I spent a good portion of my undergrad studies in the library and studying.”

However, he says, a pivotal moment happened during his first year when he signed up for a program called Fall Fest. “It was designed to put students into smaller groups so you’d get to know some of the other students in your major on a personal level.” He met his wife Marsha there, who had approached him for help with a lab assignment. They became close friends, spending quite a bit of time together. Eventually, friendship evolved into love, and they began dating. They married in 2007. Evidently, the Fall Fest program was successful in its goal, at least for Marsha and Eric.

Eric graduated from CU in the spring of 2000 and had decided to pursue his career as a doctor, however, he took a short detour initiated by his skiing obsession and his desire to live in a mountain town. He signed on with the Beaver Creek Ski Patrol and moved to Avon. That summer, he was hired as a medical assistant with a primary care clinic in Vail. “I liked it and it gave me good experience with patients and procedures, but I didn’t like it enough to not return to ski patrol that next winter.” He stayed with the ski patrol for three seasons while also working construction in the summers.

Eric had always planned to go to medical school and his MCAT admissions exam expiration date was rapidly approaching. “I had to get my act together so I enrolled at the University of Colorado Denver in 2003.” He completed his training in 2007, focusing on family medicine.

Eric did his three years of residency at Saint Mary’s Hospital in Grand Junction, completing that in 2010. Not wanting to leave the state to start a practice and pointing out that his love for mountain biking had grown, he and Marsha began considering other Colorado towns to move to. He had discovered Crested Butte and its incredible biking trails when he was still living in Boulder.

“I had read about the great trails and I came to CB in the fall of 2005. I was blown away by the scenery, the quality of the trails and this funky little town at the bottom of everything.” It stayed with him and he and Marsha visited CB several times while living in Grand Junction. “We fell in love with the area. We wanted to be in a mountain town. Crested Butte won out.” Eric sat down to chat with Dr. Roger Sherman about joining his group. “He recommended spending time over the holidays working at the ski area clinic.” Those two weeks convinced Eric to move to CB “for all the area had to offer,” and they moved here in autumn of 2010 after finishing his residency.

Eric then started the Town Clinic of Crested Butte, officially opening in January of 2011, a new entity that Dr. Sherman was part owner of. Marsha was working as office manager and reception. “Things were pretty slow at that time but over the years things changed,” he tells. “We were overwhelmed with the work we were doing and working seven days a week, not necessarily in the clinic but to keep the clinic going. I was the only one on call so I was taking those calls after practice.”

By 2017, aside from the success of the clinic, he and Marsha were feeling spent and exhausted. “The practice wasn’t sustainable for us to continue,” and in 2018 they made a brilliant change that not only helped them but benefited the community. “We merged with Gunnison Valley Family Physicians and became one of their partners. It allowed the Gunnison Valley Family Physicians clinic to have two locations, one in Gunnison and one in Crested Butte. We currently have eight providers. It has definitely expanded our services for sure.”

He now has more time off, and as Eric puts it, “more of a life. I’m able to turn my phone off. We very much enjoy hiking and I do a lot of biking in the summer. I don’t see myself ever leaving Crested Butte. Those first couple years, a lot of the patients asked if I had ever spent a winter here. It was a test to see if that person was going to stay, if they were hardy enough to take the winter,” he grins and adds, “It’s been 12 winters now and people have stopped asking me if I’ve spent winters here.”

Eric has participated as a medical volunteer for the Grand Traverse for seven years. For many years after his arrival in CB, he volunteered at the Gunnison Valley health fair, interpreting results for patients. “It was a great way to meet people in the community early on.”

Of course, Eric still skis and bikes. “For all my life, outdoor activities in the mountains have been my happy place and this area has such a unique feel. As a community there’s a commonality of interest and love for the area. I always enjoy being on a remote trail and seeing one of my patients and striking up a conversation.” He feels grateful to the community for allowing him the ability to live here all these years. “I look forward to continuing to provide care for years to come.”