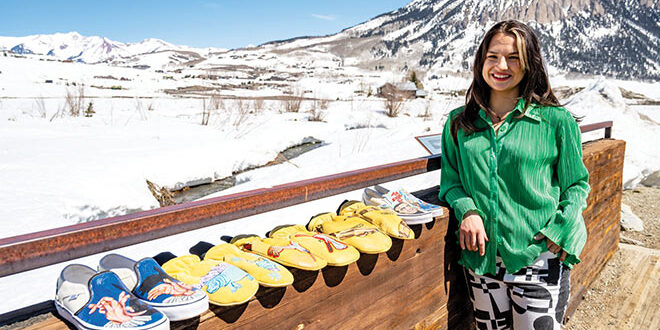 “Crested Butte is great for entrepreneurs or if you want to work in the service industry but there’s nothing in-between,” Madeline Artac says and explains, “It’s a town where you either make it yourself or you find fulfillment outside of a career. I know plenty of people who will be working in the service industry all their lives and they’re good with that. They just want to hike, ski or be outdoors and pay their bills. There’s not a lot of jobs here where you’re getting a 401k or health benefits and paid days off. If you want a job like that you either have to find it online or make it yourself.” And that’s exactly what Madeline did, she created her own business based on what she loved doing: her art. But it took commitment and vision to develop her Mad World Magic.

It all started for Madeline in a small rural farm area of Kenosha, Wisconsin, where, as a child, she could walk to Lake Michigan from their family house in the woods. Her dad worked from home, doing futures and commodities analyses, while her mom worked in project management for a variety of companies. “We’d play outside a lot, in the woods, at friends’ farms, and go to the beaches because there are a million and one lakes in Wisconsin,” she says. Winters are pretty brutal up that way so they didn’t do much through the icy snow seasons.

School was an enjoyable cake walk for Madeline and she tells that high school was a blast. “I had really great friends and a lot of extracurricular activities. I was active in Future Business Leaders of America (FBLA) and Distributed Education Clubs of America (DECA) which is basically the same thing as FBLA,” she says of the competitive groups that had graphic design competitions and explored how businesses could improve their marketing strategies. She graduated in 2015. “I had broad idea of what I wanted to do, and I felt confident so it was more about what I wanted to do,” and with that, she enrolled at Western Colorado University.

Madeline’s connection to the Gunnison Valley began when her parents bought a condo on the mountain in 2013 after her dad Googled “short ski lines” and Crested Butte was first on the list. ”We came up for summer vacation and that was it. My dad had a desire to get out of Wisconsin and into the west to experience the mountains and a healthier outdoor lifestyle.”

At Western, Madeline started out with a double major in business administration and environmental sustainability; however, business didn’t jive with her too well, especially accounting, so she switched to political science, having been intrigued when she took a business law class. “I really enjoyed all those classes,” she recalls. She graduated with a degree in poli-sci in 2019 and went on to an online internship for a non-profit that helped other non-profits improve their business.

Throughout her studies and classes, Madeline worked at Ryce as a server. “I had felt very uneasy through college, I had a lot of anxiety. I had dealt with depression once I got to college,” she tells and adds that it was in part due to moving to a new place where she knew no one. “I had some great friends throughout college and in CB I was a homebody. I didn’t really go out. It was a rough time the first year or two. I started hanging out with more of my work friends at Ryce, snowboarding in the winter and doing a lot of hiking with my cattle dog Cedar. Now I really like CB when before, I was under the impression this was going to be a temporary place. I think the biggest change for me was realizing that I can have a career and business in this town. Before, I thought I was just going to be working the service industry until I die.”

Currently, Madeline has two business endeavors she’s running with; one is a start-up family business, in partnership with her father and brother. “We started an online stock analysis business called Wicked Stock (you can find it on YouTube) “We did a big launch March 1, offering memberships on our website. We have about 200 clients at the moment.” She says after a year, they’re now beginning to see more growth since their launch.

Her other business utilizes her artistic talent, which evolved from a hobby and began in her high school days. “I paint on a variety of things but mostly clothing – hats, jackets, backpacks, gloves. My boyfriend, Tanner Marcus, has been really supportive of my art and a huge inspiration and motivator, getting me more serious about it.” As she put more effort into her creative ideas and took to social media with it, the client numbers spiked and from all over the country, although she says a lot of locals bought her work as well. “Ever since high school, I’ve been painting on Vans and shoes. I’m self taught but I had a skill and desire. I still paint on shoes but I’m customizing for customers, for example, someone likes Star Wars so I paint it onto shoes or clothing, or whatever they want it on.” Her company is called Mad World Magic and the majority of her orders come through Instagram (The_mad_world).

Madeline is expanding her business into the wedding industry in the form of live painting and customized accessory painting. She feels that her wedding art concepts are right in line with her already successful business. “I’m painting wide brim hats and jackets for brides and their wedding parties, and I’ll live paint their ceremony.” She’s already been live painting other events at the CB Center for the Arts, gallery openings, Move the Butte, as well as Sleds and Kegs. Her designs will also be on the big belly trash bins on Elk Avenue. “The town commissioned a few local artists to design the vinyl wraps for the cans. I made mine really fun,” she describes her six different designs, “there’s a skiing yeti on one, another has colorful jackrabbits, there’s a wooly mammoth walking around with the mountain scene in vibrant purples and pinks, a saber tooth tiger who’s jumping around in an ice cave, and a poppy with eyeballs.” Another of her goals is to paint murals, and she has lots of ideas for the next round of Mountain Express buses. Madeline’s also been chosen as the artist for this year’s Rubber Duckie Race posters.

Madeline feels that Crested Butte is a wonderful place for artists. “You have so much inspiration around you but at the same time, it’s hard to make it as an artist in general, trying to find the time to do art while paying your bills in an expensive town like CB. In a place like this, you have to be willing to work from the moment you get up until you go to sleep to make money while the money’s here. Since I’ve been pushing my art, I’ve found that this community is so supportive of art and specifically my art business. They want to help out, introduce you to others in the community who can help, they want to collaborate with you, and they want to commission you. We all help each other out here. There’s more of a sense of let’s help each other out instead of competition because there’s enough for all of us.”