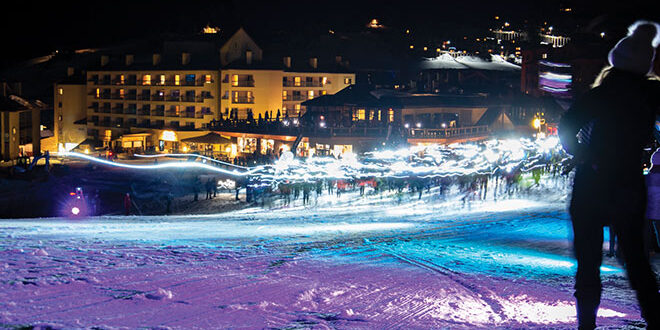 “There’s no such thing as an easy traverse”

More than 218 teams of two skiers each headed into the night on Saturday, April 2 from the base of Crested Butte Mountain Resort and six hours, 13 minutes and 15 seconds later, Cam Smith and John Gaston crossed the finish line in Aspen for the 2022 Montane Grand Traverse overall title. Nikki and Brad LaRochelle out of Breckenridge won the coed title in a time of seven hours, 56 minutes and 25 seconds and Katherine Keel and Jenya Berino out of Basalt won the women’s title in a time of 10 hours and 29 seconds. Sixteen teams were turned around with several having to turn back early on in the race.

“We’re usually in the 10-15 range overall for teams not making the cutoffs but seven or eight teams bailed at Ambush Ranch which was really surprising to see,” says race director Andrew Arell.

It was the 24th edition of the Grand Traverse, a 40-mile backcountry ski race from Crested Butte to Aspen, and never in the 24-year history of the event has anything been the same.

This year teams were met with warm temperatures and spitting snow when they started at the stroke of midnight but the hope was that temperatures had dropped enough to freeze the surface of the snow making for a fast track. Instead, they soon found out that was not quite the case as teams were punching through the snow when they crossed the East River valley behind Crested Butte Mountain.

“It was a pretty darn warm and wet night,” says 23-year Grand Traverse race veteran Rich Smith. “It was trap door, pass people at your own peril. The steeper hills more easterly facing were a little firmer but no guarantees you wouldn’t sink to your waist.”

“It was punchy but you could still skate, it was just energy sucking,” says Cam. “Extra difficult skating and then you had the next 35 miles to go.”

One of the pre-race favorites for a shot at the title, Simi Hamilton and Jeff Koons, set the tone from the start. As Olympic and World Cup Nordic ski racers, they stuck with Nordic gear for the race and proceeded to skate ski up Warming House hill from the start looking to gain an immediate gap on the rest of the field who all use skins for the initial climb up Crested Butte Mountain.

“I thought they wouldn’t start skating until they got to the top of Warming House hill,” says Cam. “Then Andrew shouts go and I just see two headlamps taking off and disappear over the top of the hill and as soon as it flattened out they just zipped away. When you’re expecting to win and there’s a team of Olympic Nordic skiers five minutes ahead, it’s definitely pretty spooky.”

But, as often the case, the race has a way of leveling the playing field as 40 miles of skiing through the backcountry has its pitfalls. With Koons and Hamilton still out front and Cam and Gaston in chase mode, the two teams made their way across the East River Valley and were looking to turn up the Brush Creek drainage when calamity ensued. Cam ran into barbed wire in the dead of night and double ejected from his skis while Koons and Hamilton were trying to fix a broken pole.

“A bunch of chaos happened near Ambush Ranch,” says Cam.

At that point, the two teams were neck-and-neck bound for Star Pass. Cam came perilously close to falling in West Brush Creek but saved himself with a willow branch and the tables eventually turned in Cam and Gaston’s favor.

Cam and Gaston pulled away and were in front over Star Pass but Cam made a point of never looking back to check how much of a lead they had.

“Looking back just hurts you either way,” explains Cam. “Either you look back to see you have a big lead and relax or look back and see headlamps not too far back and you panic. Sometimes I thought I heard a branch crack behind me and my heart would skip a beat.”

Much like the weather and the course, the conditions skiing down off of Star Pass was a mixed bag.

“Venture off at your own risk,” says Rich. “It was trickier than some years but if you stayed where there were already tracks, it was pretty darn reasonable.”

Teams then had another classic Grand Traverse curveball as snow, wind and clouds had created milk jug conditions.

“It was like white-out conditions without a lot of snow, and flat light,” says Rich. “There were times when you didn’t even know if you’re moving. We were so lucky the crews had put extra lathe and stakes out to mark the course. The volunteers were just fantastic.”

Cam and Gaston had a little more trouble up front as they were negotiating a non-existent course in the dark from Taylor Pass and over Gold Hill.

“I just remembered how we usually contour that section so we only ended up spending about two or three minutes breaking trail looking for the way,” says Cam.

The final stretch into the Barnard Hut and along Richmond Ridge had its struggles as well for the lead team as their early race effort and getting chased had them pushing hard until the finish line at the base of Aspen Mountain.

“The tough skating at the start in particular kind of got to us,” says Cam. “We were really just trying to protect our lead but we didn’t know if we had 60 seconds or 60 minutes.”

Relieved with the win, Cam still credits the race and the competition for, once again, making it a tough endeavor. He also points out that while he has won the race, he spent his first Grand Traverse race near the back of the pack.

“With the chaos of so many things that went wrong, I’m just really happy with the way we stayed after it,” says Cam. “There’s no such thing as an easy traverse. No one has ever gotten to the finish line and said, that was perfect.”

“Every race is different,” adds Rich.