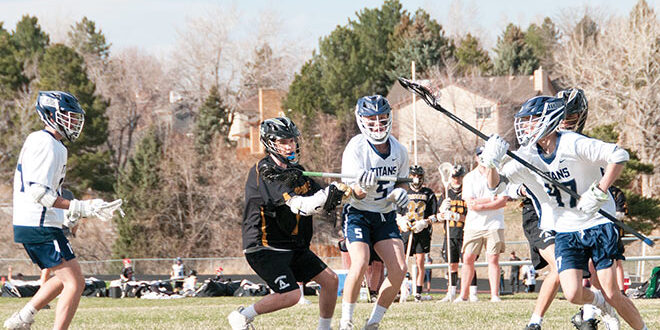 With winter sports now officially over, coach Buck Seling has nearly a full squad and the full bench is paying off as the Crested Butte Titans lacrosse team won three of four games over the past week.

“We have most of our team now for games,” says Seling. “Still not everybody but we have most.”

Fortunately for the Titans, the influx of players was just in time as they spent all of Saturday, April 9 at a C-team tournament at Arapahoe High School that brought in eight teams from throughout the state. The Titans drew three well-established programs in their bracket, Denver East, Grandview and Arapahoe, and while C-teams are predominantly freshman teams, Seling felt it would be a good test for the Titans in just their second year of existence.

“We got beat pretty bad by a C team last year so I was expecting similar level of competition,” says Seling. “All three schools are prominent programs in the lacrosse community.”

The tournament was unique as well, instead of four quarters per game, they ran two halves with a running clock that kept the pace, and the games, moving.

They opened the day at 10 a.m. against Denver East and fueled by a full bench the Titans jumped out to a 3-1 lead by halftime and finished it off in style scoring five more goals in the second half to win 8-3. Attackman Ace Gaither finished as the player of the game with four goals and an assist.

“We got off to a great start and that set us up for success going into the next game,” says Seling.

The next game against Grandview provided Seling and his team some insight into what the Titans are capable of as they continue to build the program.

The Titans jumped out to a sizeable lead in the first half and continued to push through to the final horn to defeat Grandview 15-2. Jack Pierson finished with three goals and two assists and Brendan Hartigan had four goals and an assist to share the player of the game accolades.

“It was the best 22 minutes of lacrosse I’ve ever seen from any team I’ve ever coached,” says Seling. “It was just great ball movement and great movement off the ball.”

The win sent the Titans to the final showdown of the day at 5 p.m. against host team Arapahoe. They reaped the rewards of a fast start once again as Finn Ramsey scored early and then assisted the Titans’ second goal and the Titans had a 4-1 lead by halftime. Goalie Gavin Fischer remained on his head in the second half and the Titans maintained their pace to beat Arapahoe 8-1 to finish the tournament undefeated. Long stick midfielder Kason Cox took home the player of the game award for his work through both halves.

“All weekend we played the entire roster which really helped and got kids some key experience,” says Seling.

The Titans returned to the road on Monday, April 11 to face Glenwood Springs and Seling knew it was going to be a tough match up as Glenwood cruised to easy wins over teams the Titans had played in tight games earlier in the season.

“I knew it was going to be a battle,” says Seling.

Glenwood built a 6-1 lead by the end of the first half and once the Titans started to climb back into the game, things got physical and “chippy” as Glenwood Springs eventually took down the Titans 7-3.

“They were small and very fast and we just couldn’t keep up,” says Seling. “We didn’t lose to a bad team, but we just didn’t play well in the first half.”

The lacrosse team has time off over the April break and then return to action with another series of road games. They finish the season with three games in a week at home.

“Hopefully we can end on a high note,” says Seling.