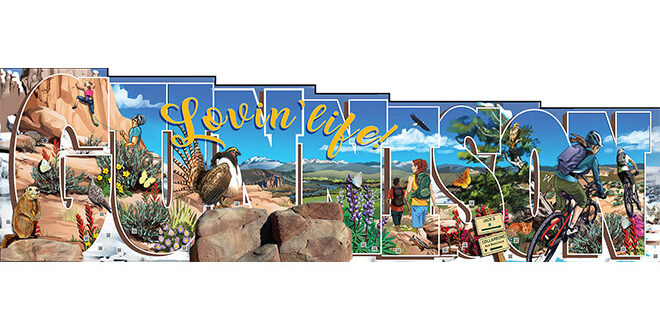 IOOF Park in Gunnison to get a new art infusion

The IOOF (Independent Order of Odd Fellows) Park in Gunnison will be getting a colorful new mural and large metal sculptures this summer celebrating the wide range of wildlife and scenic and recreation opportunities found in the Gunnison Valley. The IOOF park committee announced Amie Jacobsen will be painting and adding sculptural elements to the park beginning in May. The art is part of a larger refresh to the park that began last year with new landscaping.

Located on the corner of East Virginia Avenue and Main Street in Gunnison, the park’s prominent south-facing wall of the Twisted Fork building sees a lot of pedestrian and drive-by traffic year round. The Gunnison County Tourism and Prosperity Partnership (TAPP) identified the mural wall as an opportunity for a “placemaking project,” and worked with the City of Gunnison and the park committee to determine a theme of “trails in the Gunnison Valley” that reflects the uniqueness of the area. The City of Gunnison, Gunnison Country Chamber of Commerce, Gunnison Center for the Arts and the building owner formed a park committee and issued a call for artists last summer. A public survey was released this winter with the two finalists.

Based on over 760 responses the park committee selected Jacobsen to paint the mural and build up to three large metal sculptures for the project.

Jacobsen will begin painting at the end of May and install the sculptures, likely a larger-than-life sized butterfly and flowers, this fall.

Jacobsen graduated from Western Colorado University in 1997 with an art degree. She joined the Paragon Art Gallery in Crested Butte, and also created the dragonfly sculpture in front of the Crested Butte Center for the Arts.

“While my art career has taken me down many paths, including several public art pieces, this one is special,” said Jacobsen in a statement issued by TAPP.

“In 1978 my grandfather purchased a piece of land south of Gunnison and built a lodge there. It became our family’s place of summer refuge and recreation. Summer trips to Gunnison are routine now, where we shop, eat and have hardly missed a Fourth of July fireworks show in all those years.”

Jacobsen’s son Jared was born in Gunnison and attended Western as well, followed by Jacobsen’s daughter, Jessie, her nephew and a niece who is there now.

Jacobsen describes her designs for the IOOF Park as showcasing what she loves most about the Gunnison Valley. “For me, it’s the rugged terrain, the green summer valley, the high mountain peaks and the plants and animals that I have learned to spot and identify. That is what makes hiking, biking, climbing, hunting, skiing, snowshoeing, horseback riding, camping and fishing so wonderful in Gunnison and Crested Butte. I am excited and honored to have the opportunity to contribute to the culture and community of a place that means so much to me! I hope to make Gunnison proud!”

Based on the public survey feedback, there will be some slight tweaks to the mural design, removing the phrase ‘Loving life!’ and minor adjustments to the font and artistic style.

The original mural at IOOF park, now quite faded, was painted around 1995 according to Gunnison Country Chamber director Celeste Helminsi, who was part of that committee. Helminski confirmed that the Gunnison Chamber is planning to kick off a new event series called Mid-week on Main Street starting June 1, featuring music and entertainment in the park every Wednesday from 5:30 to 7:30 p.m.