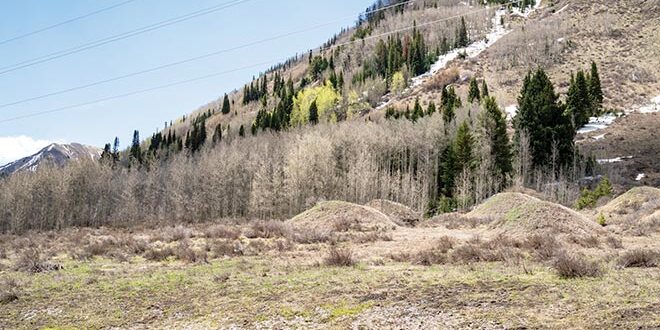 As a former Alpine Express driver I can say with certainty that one question I would get every now and then driving visitors to Crested Butte would be, “Where do y’all store the moguls in the summer?”

The response would involve me pointing at the avalanche mitigation humps at the top of the hill just outside of town by the county shop and respond, “right there.”

Now, that seemingly innocent inquiry may gain permanent notoriety as the Crested Butte Mountain Bike Association (CBMBA) looks to build the Mogul Storage Trail at the end of the Baxter Gulch trail to give riders a downhill-specific option at the end of an already great ride.

The plan is to branch off the first switchback when descending Baxter Gulch and head across the hillside and down through the series of humps near the Gunnison County shop. Those humps were installed years ago as an avalanche mitigation tool.

“We’ve always been eyeing them and thinking we could make a fun little downhill out of them,” says CBMBA director Dave Ochs. “We will utilize the grade for some flowy fun turns and there will be a jump line as well as an intermediate line.”

The new trail will also benefit all users of Baxter Gulch trail as it could help move bikers hauling down the trail away from what is also a popular hiking trail.

“There are dog walkers and hikers that like to walk up to that bluff and to the first creek crossing and it will be really nice to have some separation for the hikers and bikers,” says Joey Carpenter, Recreation Open Space and Trails supervisor for the Town of Crested Butte.

“It’s a great way to mitigate numbers and traffic on the trail,” adds Ochs.

While new trails often come with a host of hurdles to gain approval and find common ground, the location of the proposed trail lends itself to a fairly straightforward review process.

“It’s on an open space parcel that doesn’t have any restrictive covenants so it’s relatively easy for us to put a trail project in,” says Carpenter. “We’re still going to do public scoping to make sure there’s public support.”

In an effort to engage with all users, CBMBA and the town of Crested Butte invite the public to join them on Wednesday, May 25 on the deck of Pitas in Paradise from 4-6 p.m. to provide comments and check out the proposed design.

If the Mogul Storage Trail is met with support, CBMBA and the Crested Butte Conservation Corps (CBCC) looks to commence the project as part of their annual season kick off weekend. CBMBA is hosting their annual meeting and kickoff party at Rainbow Park on Friday, June 3 at 4 p.m. and will then start building the trail on National Trails Day, Saturday, June 4. As always, the success and speed of the trail build is dependent upon volunteers that weekend.

“We need people,” says Ochs. “We got to move a lot of dirt and build a lot of berms and shape the ‘moguls’ into flowy, fun features. We hope to have a line completed National Trails Day weekend but there may be more work for other lines and options afterwards.”

The CBCC will then continue efforts on the trail as one part of their long list of summer work. Perhaps during which they may find the answer to another tourist question from back in the day.

“What altitude do the deer turn to elk?”