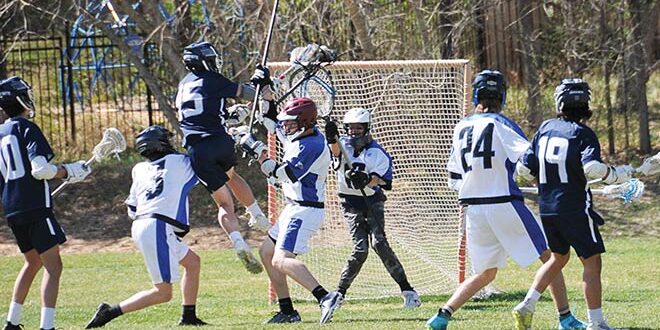 Close season at home on Saturday, May 7

The Crested Butte Titans lacrosse team finally had a full roster of 25 players for a weekend of games and it was just in time as they headed to Colorado Springs for four games over two days Friday and Saturday, April 29-30.

The Titans opened the four-game stretch against the Colorado Springs School JV program and with the help of ball movement, dominant faceoff work and solid defense, rolled to a 16-3 win.

The Titans built a 13-0 lead by halftime and coach Buck Seling decided to back things off in the second half to continue developing players’ off hands as well as getting players key game experience.

“It was a great way to start the weekend and lots of kids got a lot of playing time,” says Seling.

“We had scoring from all over the place which was great,” says Seling.

The Titans then re-racked to face the Vanguard School on Friday and rolled to another big win finishing off Vanguard 15-1 using the second half again to continue developing aspects of their game.

“I had our main scorers working on the off hand and wanted to keep working on our extra man offense,” explains Seling. “We tried to keep the shutout by keeping up defensive pressure and work on our defense overall.”

The Titans then had a bit of a challenge ahead of them, at least on paper, as they were set to face the Palmer varsity team on Saturday morning. Based on rosters, Palmer had a significant size advantage over the Titans and were reported to play a very physical style of lacrosse.

“I was concerned about their size,” says Seling. “They’re basically a football team that plays lacrosse.”

Concerns were laid to rest early though as the Titans built a 6-0 lead by halftime and finished Palmer off 10-2 in the end. Gaither had another standout game with five goals and two assists while Kody Bodine scored three and Pierson and Brendan Hartigan had one goal each.

“It was a very physical game, but we were just too fast,” says Seling. ”We had a lot of assists on the goals so I was excited about that, and we only lost two faceoffs the entire game.”

The Titans finished the weekend against a well-known Colorado high school lacrosse program Cheyenne Mountain. Their varsity team has won the state title so Seling expected a tough opponent in their JV squad. Not only that, but the rigors of the weekend had taken its toll on the Titans.

“Playing that many games had worn us down and we lost some kids to injuries,” says Seling. “Our roster was depleted.”

The Titans fell behind 2-0 but tied the game 2-2 by halftime. Cheyenne Mountain then stepped things up in the second half as the Titans wore down and scored five more goals to Crested Butte’s one to hand the Titans a 7-3 loss.

“We played really good defense in the first half and I think it was a great challenge for us,” says Seling. ”It was two quality teams playing each other and my favorite game of the weekend.”

The Titans finish the season at home as they host Grand Junction on Thursday, May 5 at 4:30 p.m. and then wrap things up on Saturday, May 7 when they host Fruita Monument at 11 a.m. Both games will be played behind the Gunnison Middle School and the Titans will host a season ending BBQ following the game Saturday for players, families and fans.