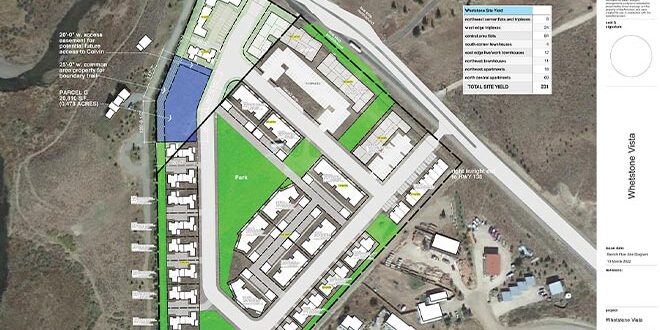 As a major North Valley housing project gets closer to sketch plan with Gunnison County, a recent land parcel addition has led to changes for the site plan adding an additional entrance/exit and a potential roundabout for Highway 135. On Thursday, May 19, project leaders held a virtual public meeting to present updates on the project and discuss these changes and more.

The Whetstone housing development, located on a county-owned parcel on the west side of Highway 135 across from Brush Creek Road, is projected to include more than 220 homes of mixed types and sizes. The units in the initial proposal concept would serve both rental and ownership markets for residents making up to 200% of Area Median Income (AMI).

Trestle Strategies, the firm who is working with Gunnison County leaders on the project, ran the meeting on Thursday and began with a review of the project and its recent site plan changes.

Danica Powell of Trestle said they are refining the design and getting it ready to submit to the county for sketch plan, with construction beginning as early as summer 2023 if all goes well. “We’ve also has some significant additions,” said Powell. “We’ve added more land to the north side and a second point of entrance and egress to the site.”

The addition comes from a parcel to the north of the main Whetstone site, which the county is under contract to purchase from George and Eileen Gers. The Gers would retain a portion of the parcel to rebuild a home.

Powell said the new parcel opens the availability of open space, allowing enhanced mobility throughout the site for safe bus, car, bike and pedestrian circulation. The latest sketch shows a larger park and green space corridor, and a direct connection to the Brush Creek intersection. Powell explained that Colorado Department of Transportation (CDOT) and the project leaders have been in discussion about adding a roundabout to Highway 135 since the property will join Brush Creek Road on the other side and add significant traffic to the highway corridor.

The Thursday meeting included two breakout sessions to allow for targeted discussions on the site design and circulation and on its sustainability and infrastructure.

Comments from attendees on the latest design and layout included some critiques of the parking lot placement between the largest density structure and the greenway, and inclusion of transit stop bulges.

Some objected to the layout of the high-density housing by the highway and underscored the need for connectivity to the RTA bus stop across Highway 135. While several people expressed the desire for an underpass to convey bikers and pedestrians safely across the highway, that decision would add substantial costs to the project and involve county collaboration with CDOT. That process is still in its earliest design stages.

Crested Butte town planner Troy Russ said it was unlikely RTA would ever go in the subdivision, and it would be important to give residents access to the RTA stop along Highway 135. “I think your grid allows the loop to happen but we’re missing the more important transit,” he said.

Several people observed that a biker and pedestrian underpass constructed in tandem with the possible roundabout would make the community less reliant on motor vehicles and could connect to a future Crested Butte to Crested Butte South rec path.

“We’re just trying to set up the physical parameters of the site in a way so that should transit be provided to the neighborhood at some point in the future there’s a logical way it could serve the neighborhood,” said jv DeSousa, a member of the project team.

“I think that’s a spectacular mistake,” said Russ. “If we tie this project with the intersection’s design and an underpass for a grant potential of coming in with a truly multimodal intersection design that serves this community…we’ll be the most competitive we could possibly be for federal grants. And the town of Crested Butte would absolutely support that.” Russ stressed the importance of going for the underpass and making connections to transit.

“It’s unfortunate that you refer to this as a spectacular mistake,” responded assistant Gunnison County manager for community and economic development Cathie Pagano. She said the idea is to lay foundational work to create opportunities such as transit access to the site, and she said the project was “certainly open” to including an underpass in the roundabout design. Pagano said the county is very early in the process of designing a roundabout before CDOT gets more involved.

“I think you definitely need to have the underpass,” said citizen George Gibson who lives in the nearby Skyland subdivision. He referred to the children who would need safe access to the Crested Butte Community School, and the need for connecting to a bike path to town and to CB South.

Powell said the roundabout feedback was great, but cautioned that the addition of an underpass is out of the purview of this project.

“An underpass is very expensive, and we don’t own all sides of the property, but we can maybe more specifically show how this project could connect to a potential underpass,” said Powell. “The site plan is set up for that now, to create that opportunity.”

Other feedback centered around the three story, multi-unit structure facing the highway and how it would connect to a greenway. Some attendees suggested flipping the parking lot to face the highway so the building could connect more to the community’s central greenway. Project team members said they could consider that option, although it would make access to transit more challenging.

Parking plans include parking lots with two spaces for two bedroom units, 1.5 spaces for units with one bedroom and 2.5 spaces for larger units. There is additional street parking planned with sidewalks and planted parkways to foster a slow traffic speed in the neighborhood.

The second breakout session discussed the sustainability and infrastructure of the plan. Gunnison County sustainability coordinator John Cattles outlined the sustainability goals. “We would like to use either geothermal heat-pump or air-source heat pumps. Either way it would be all electric,” he said. Buildings would comply with 2021 climate codes, using about half the energy of most buildings in the county, he estimated, and be set up for solar if not fully equipped with solar panel arrays. The greenway plan is to use native plants that require little irrigation.

“One of the biggest hurdles is the infrastructure,” said Cattles of water and sewer utilities. The three options are to connect to the town of Crested Butte utilities, to connect to the East River District or to build their own plant onsite. “We have water rights,” he said, but building would have higher operating costs and could also delay the project. Connecting to the East River District would require an expensive plant expansion there.

“Our preferred option is connecting to the town of Crested Butte. It’s the most sustainable solution,” said Cattles, since Crested Butte has ample water rights and a good system. That option is currently under study and requires agreement with the town and property easements along the highway. The engineering study on that option has also encountered delays.

“This project will be phased,” said Cattles. “We want to learn from our early phases and try to build on them as the project develops.”

The project team anticipates making its final adjustments and submitting the plan to Gunnison County for sketch plan approval this summer, and construction could begin in 2023.

“This has been a very intentional process,” said Powell of the various stakeholder meetings.