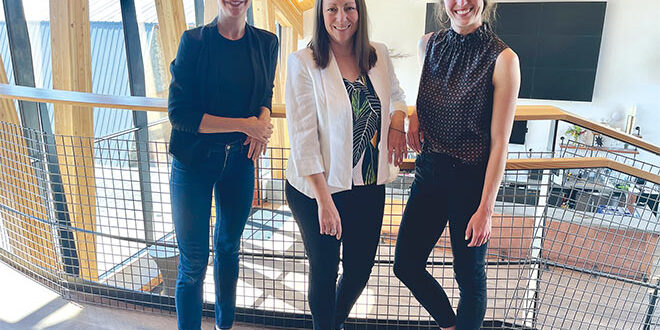 Liebl, Mason and MacMillan stepping up

A change at the top of the Crested Butte Center for the Arts management structure was announced Tuesday, June 28 and will take effect immediately. Current Center staff members Jillian Liebl (Development Director), Brooke MacMillan (Artistic Director), and Melissa Mason (Director of Community Engagement and Operations) will be promoted to form an “Executive Leadership Team” (ELT) to manage and lead all the functions of the Center for the Arts.

The three take the helm after the Center board and executive director Matt Neufeld, who has been in the position since February, parted ways Monday. When asked, the details of why the transition was taking place were not disclosed other than to say it wasn’t a good fit.

“We wish Matt the best of luck and are excited that we have such a strong management team in place to take the reins of the Center immediately,” said board president Leigh Mundy. “These three managers have been working for the Center at the executive level throughout the pandemic and we are delighted that they have agreed to step up into these new and challenging roles that will continue the Center’s vibrant and dynamic momentum.”

Mason has worked for the Center for over a decade, and Liebl and MacMillan both joined the team in 2018.  Mundy said that together, they have developed and honed the skills needed to run the Center’s year-round, multidisciplinary programming which includes ongoing engagement in visual, performing, literary and culinary arts, along with serving as venue and host for some of the community’s most beloved signature events and programming — Alpenglow summer concert series, Move the Butte, the Crested Butte Film Festival, the Public Policy Forum and others.

All bring with them rich backgrounds working in different spaces and places. Combined, they have more than 40 years of experience in non-profit work, community organizing, and arts and cultural direction.

Liebl has a diverse background in event planning, sales and marketing, theater, and outdoor education. She has served as the Center’s Development Director since 2019 and previously held the role of Special Events and Culinary Arts Director, planning and executing the Center’s fundraising events. Other past roles include Event and Marketing Coordinator at the SteamPlant Event Center in Salida, Program Officer at Humanities Texas (the Texas state affiliate of the National Endowment of the Humanities), and theater critic and arts features writer at the Austin Chronicle in Austin, TX.

Mason established the Visual Art program at the Center after selling her Crested Butte Art School in 2012. She also started two signature community art making events, the Chalk Walk and the Community Iron Pour. Mason also ran the Piper Gallery in the original Center facility while sitting on the new Center building Design Committee, working with stakeholders to bring the new Kinder Padon Gallery to the forefront of Center programming. Mason also previously served as the Program Director for the Trailhead Children’s Museum designing children’s art curriculum and events. In 2015, working through both the Center and her position as Chair of the Arts Alliance, Mason was central in helping Crested Butte become a state of Colorado certified Creative District, sitting as Chair of the Creative District Commission shortly after the district’s inception.

MacMillan has worked locally and internationally in the arts and community organizing since 2005. In Crested Butte, she has worked as a writer, a photographer, the director of the Gunnison County Substance Abuse Prevention Program, and a backhoe driver. MacMillan worked for the Turkish Film Channel helping shape content for foreign markets while contributing to organizing the Istanbul Film Festival. After moving to Scotland in 2014, MacMillan worked with UK book and literary festivals while completing her MFA thesis manuscript on oral histories of the oldest old generation in Scotland, along with a look at aging and the elderly in our global context — a project she is currently expanding into a book. MacMillan has a BA in Creative Writing from Colorado State University and a Master of Fine Arts from Goucher College in Baltimore.

“Because the trio’s respective strengths complement one another in all areas of the Center, we are more than confident that the Center will continue to thrive within this fully embodied leadership manifestation at the executive level,” said Mundy. “We see the creation of the Executive Leadership Team as an opportunity for the Center to ‘walk the talk’ of collaborative leadership, shared decision making, and the principles of staff-first, local-centric leadership.”

MacMillan and Mason will retain their current titles, with added executive responsibilities while Liebl will shift in title to Managing Director. As the ELT, they will be responsible for managing and leading all areas of operations and programming for the Center for the Arts.