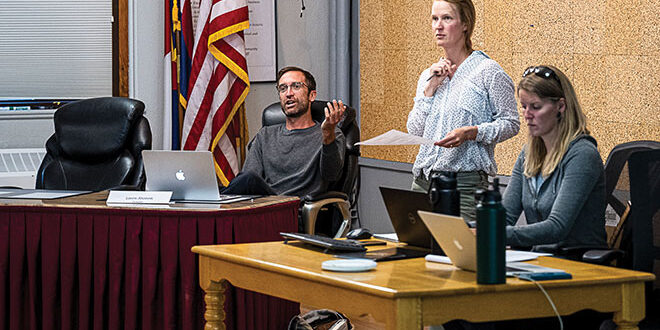 How much? For who? Would it even pass in this economic climate?

Details are being debated and worked out over a potential mill levy bond by the Gunnison County Metropolitan Recreation (Met Rec) District. The board is discussing letting voters decide on a property tax increase that would fund “active recreation” in the North Valley. How much to ask for, how it would be carved up and even whether it should be put to voters given the current economy, were all discussed at the June 15 Met Rec meeting. No decision has yet been made but the board is expected to decide whether to pull the trigger at the July meeting.

Met Rec district manager Hedda Peterson said the potential tax would only apply to the north subdistrict that is roughly defined by the same boundaries as the Crested Butte Fire Protection District. Revenue would be intended to help fund three primary areas: the capital costs of recreation amenities such as connector trails and fields; the operation and maintenance costs of recreation amenities and programs that many local non-profit organizations have trouble consistently paying for; and the costs of stewardship for the natural resources such as trailheads.

Peterson said the growing county brings with it complex needs that are overseen by multiple jurisdictions and that is where Met Rec can help facilitate broad solutions. She said it is common for an entity like Met Rec to have a dedicated tax for a subdistrict.

“Met Rec has the ability to harness support from across jurisdictional boundaries to deliver a collective impact,” she said. “Met Rec is positioned to help catalyze the recreational needs that are shared by the North Valley as a whole.”

As a starting point, Peterson proposed that 30-50% of the revenue collected be dedicated for capital construction projects, another 30-50% go to non-profits that support recreation, and 10-20% be allocated to government agencies that deal with stewardship on lands accessible to the general public.

“These are approximate numbers,” Peterson emphasized. “And for the north subdistrict it would be on top of the current mill levy in place. Adding the one mill would roughly double the current Met Rec tax payment for property owners in the North Valley.”

Responding to a question from citizen Maureen Hall, the board indicated that the money raised would go to both summer and winter recreation so for example both bike and ski trailheads could benefit.

“To me, a trail is a trail, whether it is used in the summer or the winter,” commented Met Rec board member Loren Ahonen.

“Perhaps that should be specifically included in the ballot language to capture those winter recreation users,” suggested Hall.

“When constructing ballot language you want to keep it as concise but as broad as possible to keep as many options open as possible,” explained Met Rec board chair Dave Clayton.

Crested Butte Parks, Recreation, Open Space and Trails director Janna Hansen asked if the arts and cultural activities would be eligible for funding from the revenue since the proposed language referenced that the money would be used for “active recreation.”

“In the past we have included support for cultural activities,” said Clayton. “It is included in our service plan.”

“I think this language is intended to address active recreation and not something like television that some define as recreation,” said board member Ian Billick. “I would prefer it to not include ‘cultural’ activities. But if we don’t mean ‘active’ then we should take it out. We need to agree on the intent.”

“We have met with the Center for the Arts as a stakeholder for example,” said Peterson. “And they have expressed interest in getting support for operational costs. TV is supported through the district’s general mill levy so people understand this proposal is not meant to be used for that.”

“Dance for example can be active,” said Clayton.

“Absolutely. But we need to be clear,” said Billick. “My initial feeling of intent is that ‘active recreation’ does not include television or cultural amenities. The general fund could continue to address cultural activities like it does TV. But I am open to anything. It just needs to be clear enough for the voters but broad enough that the board can have latitude.”

“I understand the desire to keep it broad but if the intent is to not fund cultural activities it should be clear,” said citizen and county commissioner candidate Laura Puckett Daniels. “You don’t want people to feel deceived.”

“I hear you, but whoever is on the board should be able to have room to make decisions,” said Billick. “I might not feel cultural activities should be funded but if I’m not on the board, my opinion won’t matter.”

“No one is trying to hide anything but there is nuance involved with differing opinions,” said Ahonen.

“I’m just thinking of how to get it passed and the Center and the CB School of Dance has a broad reach,” said Hansen.

Peterson said the specific ballot language does not need to be decided upon until September. “This is a healthy conversation and the type of feedback we are seeking right now,” she said.

Former board member Derrick Nehrenberg wondered if getting voter approval for $750,000 was enough. “Under the current proposal that would only allow $375,000 for non-profit operational funding,’ he said. “I could see a situation where everyone wants a piece of the pie but there isn’t enough pie to go around.”

“I agree with Derrick,” said board member Earl Marshall. “We can’t push too big, but we should do enough to have an impact.”

Nehrenberg suggested perhaps the proposed percentage allocations be adjusted to provide more to the non-profits. “We know those needs are big,” he said.

“Seeing what we are seeing right now in the county, we can’t plan enough and this is an opportunity,” added Crested Butte Mountain Bike Association executive director Dave Ochs.

“We understand this will not bring in enough to solve all the issues we have now,” said Peterson. “It is meant to help catalyze and be a tool to assist with projects and operations. It won’t be enough to build a turf field on its own for example, but it could help partners accomplish needed projects.”

“There are definitely needs and planning for the long-term is good, but it is hard to raise taxes so if there is a real shot at it, don’t overshoot and miss it,” said Puckett Daniels. “I am hearing a lot while campaigning from people stressing over their property taxes, especially the cumulative impact of various taxes. It is a tension to deal with.”

“I agree,” said Hall. “It is a difficult balancing act. It is not a good year to ask people to raise their taxes with gas at $5 a gallon and inflation at 8%. I hear people saying they won’t vote for any tax. The need is there but it is an uphill struggle. The lower number might be more palatable.”

Peterson said the district has not conducted a public poll on the viability of the tax proposal but has been reaching out to stakeholders. More public engagement will be forthcoming. Puckett Daniels suggested starting with a few focus groups that could provide targeted feedback.

Peterson encouraged any citizen to reach out to her or any board member with ideas and feedback. Their emails are listed on the Met Rec website (gcmetrec.com).

“The board will make a decision in July whether to proceed with the mill levy and then we have to set up the language with the county,” said Peterson. “So any feedback is appreciated.”