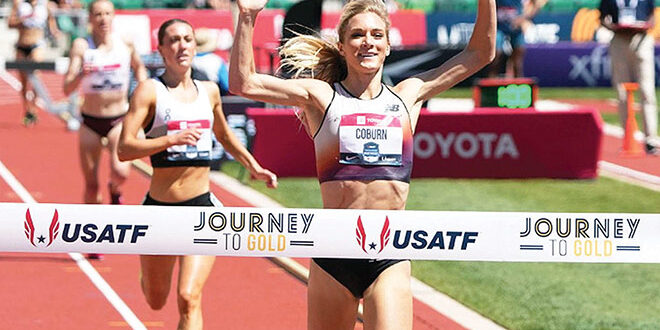 Coburn has racked up numerous accolades in her professional steeplechase career including an Olympic Bronze medal as well as gold and silver medals at previous World Championship races.

This year was set up to be another shot for Coburn to medal as she was coming off another National steeplechase title and, for the first time ever, the World Championships were held in the U.S.

“I was really excited to be racing worlds on U.S. soil, it was really special,” says Coburn. “I felt I was fit enough and strong enough to put myself in the mix and go for a medal.”

Coburn pushed her way into the finals after placing fourth in her qualifier heat with a time fast enough to make the final cut of 18 out of 42 total racers.

With that taken care of, Coburn made the decision to put herself out there from the very start of the race with a medal on her mind. Otherwise, where she finished didn’t really concern her.

“I decided I might as well go for a medal, run hard from the start and risk it a little bit fully aware it could backfire,” says Coburn.

She took off with the lead pack of five runners and was in the mix through the first 2,000 meters of the 3,000-meter race. But when the lead pack made one last move, Coburn fell off the pace and ended up in eighth place overall.

“I was disappointed but happy with my tactics and effort,” says Coburn. “I had some good takeaways from the race.”

The season is far from over though as Coburn is now in Europe for eight weeks to continue training with three more Diamond League races, the professional track and field racing circuit, on the schedule.

“I’m here to get workouts at sea level,” explains Coburn. “You can rip much faster workouts at sea level and it kick-starts the racing legs. I’ll definitely be in a better position for the Diamond League races than I was at Worlds. I have three more chances to run good times, I’m excited for that.”

The schedule includes a race in Monaco on August 10, another in Brussels, Belgium on September 2 and then the Diamond League finals in Zurich, Switzerland on September 9.

“I’m happy wherever I am,” says Coburn. “I know this job I have is very peculiar and this life is weird, but I realize how lucky I am.”

Coburn returns to the states to race in a road mile race in New York City on September 11 and then back to Crested Butte for her other passion mixed into her running career, the Elk Run 5k.

“My mission was to bring runners to Crested Butte and associate running with Crested Butte,” says Coburn. “I also wanted to support Living Journeys.”

“They take care of the stuff you don’t even think about,” says Coburn. “They help with those additional stresses outside of the cancer treatment.”

Coburn is looking to hit the $75,000 mark this year and registration is open online at elkrun5k.com for both the virtual version, for those who can’t make it to Crested Butte, and the in-person race.

The race weekend kicks off on Friday, September 23 with bib and packet pick up as well as a meet and greet with Coburn. While the Elk Run 5k race on Saturday starts at 10 a.m., racing actually starts at 8 a.m. with a high school cross-country race on the same course. It’s the third year the high school race has been a part of the Elk Run 5k and that, too, has grown.

“The high school race is huge now,” says Coburn. “It’s become really popular because running is so hard, but this event is so fun. It creates an environment that running is really special.”

The Citizen’s Race then kicks off at 10 a.m. with the call up of the elite athletes to the starting line which includes Olympians and NCAA champions.

“I think it’s kind of cool everyone races together,” says Coburn.

For information regarding the course, Elk Run 5k swag and to register for either the virtual or in-person race, go to elkrun5k.com.