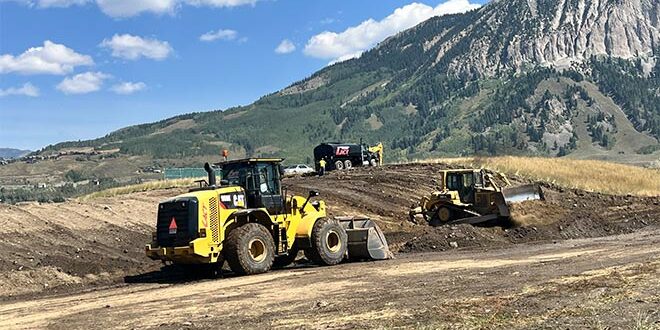 Cost is more than expected…

The first step in Crested Butte’s effort to build the Sixth and Butte affordable housing project began last week, and it will cost more than initially anticipated. Despite the price jump, town staff said there is enough money in the town’s affordable housing fund to soak up the increase.

Part of the property was formerly used as a dump, so state-approved clean-up work in the form of a VCUP (Voluntary Clean-Up) and Soils and Materials Management Plan (SMMP) is necessary on about an acre of land known as TP-5 before actual construction can begin.

That work started Wednesday, September 7 and was originally estimated to cost $1.3 million. However, two bids were received above the estimate and the actual cost will be closer to $1.85 million with Lacy Construction doing the work. Lacy Construction participated in previous VCUP work on the old town dump. Additional landfill charges also come into play so the council approved a price adjustment for the work of $700,000 raising the cleanup portion of the project to $2 million.

In a memo to the town council, community development director Troy Russ explained that about 15,000 cubic yards of soil will be removed as part of the clean-up process. He said that the town’s affordable housing budget could handle the price adjustment because some items anticipated to happen this year have been delayed. For example, $415,000 was budgeted to relocate a house from Seventh and Maroon to an affordable housing lot in Paradise Park but that will not happen. He said also that the town had anticipated receiving a state grant for the project for $2.5 million but was actually awarded almost $3 million instead.

“As such, a budget amendment is not needed at this time,” he informed the council.

The clean-up work is expected to be completed by the end of October. Crested Butte housing director Erin Ganser explained that the town will begin construction of off-site improvements next spring. That will include things like the extension of a water main, creation of a bus stop and a new Four-way Stop at Sixth and Butte. If the developer of the rental apartment complex is successful in its application for low-income housing tax credits in May, construction is anticipated to start in the late summer or fall of 2023 and take approximately 24 months.