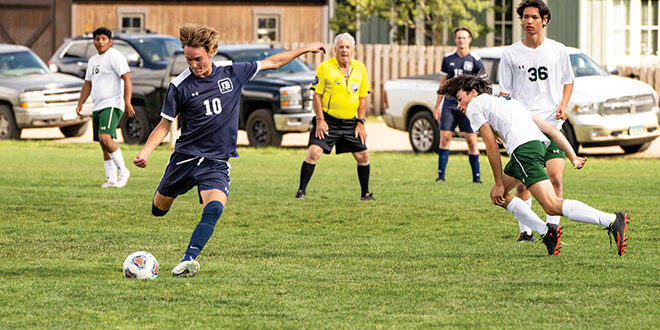 Soccer wins two of three games over past week

“It was absolutely game on”

The Crested Butte Titans soccer team got their first real test of the season last week when they headed to Vail to face Vail Mountain on Tuesday, September 6 and fell 2-0. They recovered from the loss over the next two games to cruise past Colorado Rocky Mountain School and then edge out a win over the Ridgway Demons.

Vail Mountain has been rolling through 2A opponents this year while continuing to shine against the bigger 3A programs as well. After a relatively light schedule for the Titans prior to the showdown, Vail Mountain was looked upon as the first true top-flight opponent for Crested Butte of the season.

“We knew it was going to be tough,” says coach Bob Piccaro.

Vail Mountain set the pace and tone for the game from the opening kick-off with a well-organized attack and strong play from their back line. They threatened early but the Titans held off the initial surge and after the opening 20 minutes, the Titans started to find chances in the attacking third.

Vail Mountain held strong though and cracked the seal on the Titans net with a long blast from distance in the 30th minute. They tacked on a second goal not long after to build a 2-0 lead by halftime.

“It was absolutely game on,” says Piccaro.

“We were off a step and we have to capitalize on our chances in games like these,” says Piccaro. “It was a well-fought battle but they controlled our offense more effectively than we controlled theirs. They flat outplayed us.”

The Titans returned home to host Colorado Rocky Mountain School on Friday, September 9 and cruised to an 11-1 win. After taking a 4-1 win by halftime, the Titans stepped it up in the second half to score seven more goals. Senior captain Jamis Matlock led the way with three goals and four assists with a lot of production coming from players off the bench.

“It was great to get our developing players more time so they can build more confidence on the field because we will need them as the season continues,” says Piccaro.

Crested Butte then headed to Ridgway the following day for another league showdown. Ridgway is always a stout opponent and they proved it once again as their stifling defensive set had the Titans struggling to find chances in the attacking third.

“They were a good team in terms of their structure, we just couldn’t penetrate on them,” says Piccaro.

The Titans broke the scoreless battle when Nathan Sawyer collected a loose ball 40 yards out and blasted a shot into the upper corner for a 1-0 lead. Goalie Joseph Suddereth came up with a massive save in the first half as well to help hold the slim lead at halftime.

While the Titans continued to maintain a majority of the possession, Ridgway started to surge midway through the second half and as time was ticking away, Ridgway stepped up their game even more to press Crested Butte.

The Titans defense remained stout and it wasn’t until the final minute of the game that they finally sealed it when Otto Billingsley carried the ball up the flank and drove it cross field to Jacob Bernholtz. Bernholtz settled it and clipped it into the upper corner to ice the 2-0 win.

“We need more creativity up top to get through that back line, hitting long bombs just doesn’t work and we still had a number of chances that we didn’t finish,” says Piccaro. “A couple of players maintained their intensity for the entire game, but we still need a high level of intensity from everybody the entire game.”

The Titans head to Colorado Springs and Carbondale for their next two matches and then prepare for the homecoming game against the Telluride Miners on Friday, September 23.