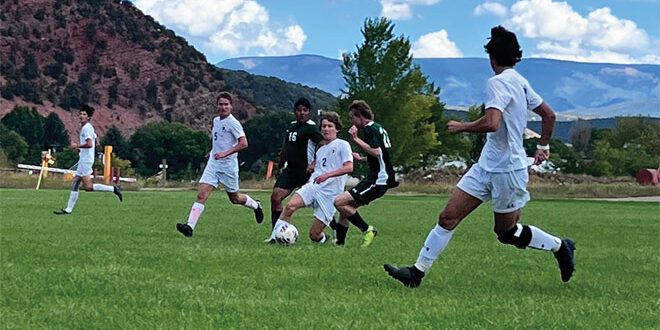 The Crested Butte Titans soccer team rattled off two wins this past week against Colorado Springs Christian and the Colorado Rocky Mountain School (CRMS) as they prepare for a big game this Friday, September 23 when they host the Telluride Miners at Rainbow Field at 4 p.m. for Homecoming.

The Titans started off slowly against Colorado Springs Christian falling behind 1-0 before tying the game by halftime. An early goal in the second half put the Titans on top and they closed out the game scoring three goals in the final 10 minutes for the 5-1 win. Jamis Matlock led the Titans with a hat trick and Colm Piccaro tallied two assists.

Three days later the Titans headed to Carbondale to face CRMS. While Crested Butte beat CRMS 11-1 earlier this season, there was still plenty to work on in their second match against CRMS on Saturday, September 17.

“The plan was to keep working on our new formation and on the items we have been preaching such as fewer touches, quicker movement on and off the ball and tighter defense by all players on the field,” says coach Bob Piccaro.

For the most part, the Titans executed what was asked of them from the opening kick off as quick passing and a focus on using the flanks led to two goals in the opening 10 minutes of the match. Colm found plenty of room down the right side on several occasions and while his initial crosses were turned away by the CRMS defense, Matlock and Jacob Bernholtz each got on the end of Colm’s effort to put the Titans up 2-0.

Marin Gardner and Matlock then took their work down the middle connecting for two quick passes to set up a blast from Gardner 18 yards out and Bernholtz headed home another cross from Piccaro for a 4-0 Titans’ lead midway through the first half.

With CRMS pinned inside their 18-yard box to fend off the Titans’ attack, Nathan Sawyer found room from 25 yards out to drive a low shot into the corner and when Ben Barney and Avi Narayana scored later in the half, the Titans had a 7-0 lead at halftime.

Crested Butte continued to pour it on at the start of the second half as Blue Gardner assisted Bernholtz for two more goals in the first 12 minutes. Crested Butte then finished the game in the 69th minute when Kaiden Marziano poked a through ball to Colm and Colm tucked it away for a 10-0 lead leaving the officials to call the mercy rule and end the game. Bernholtz netted four goals in the game with Colm recording four assists.

“For the most part, the plan was executed, with some showing good ball movement and speed,” says Piccaro. “Our defense was not really tested though in our end, so we couldn’t see how their work has been coming along.”

The Titans have a massive challenge ahead of them this Friday, September 23 as they host the Telluride Miners for Homecoming at 4 p.m.

“It’s a big game Friday,” says Piccaro. “The plan is to run, run and work harder than we have all season this week. We must be the better conditioned team and our ‘head on a swivel’ mentality must be second nature.”

The match with Telluride is a classic Homecoming showdown and Piccaro expects the game to be a barnburner.

“I expect Telluride to be a serious challenge, as they always are competitive and they always battle hard to the end,” says Piccaro. “They have speed and grit, a winning combo, so we must be faster and grittier.”