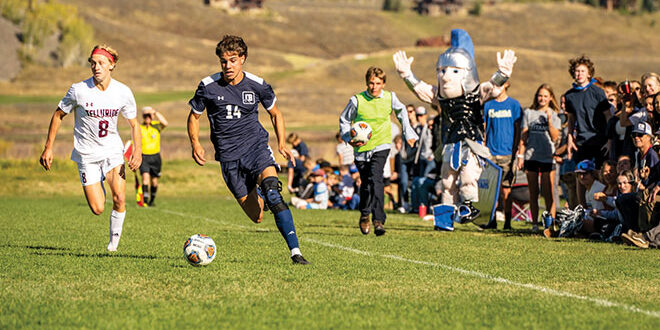 Every season, one of the highlights and big tests for the Crested Butte Titans soccer team is hosting the Telluride Miners at Homecoming. The ski town showdown never disappoints with the Miners always looking to play the spoiler and most games coming down to a late goal to decide the victor.

“We expect a team that is going to be tenacious, hard on the ball with speed and skill,” says coach Bob Piccaro.

The showdown played out a little differently though this time around as Crested Butte built a 2-0 lead by halftime and tacked on three more goals to win 5-0.

The Miners brought that aforementioned tenacity and speed to the start of the match to dictate the pace and open up a golden scoring opportunity five minutes into the game. The effort was turned away, but the Titans appeared a bit disjointed through the opening 10 minutes of play.

“We had not settled into our groove yet, and Telluride came out with a bit more intensity,” says Piccaro. “Also, maybe some early jitters with the big crowd.”

Once Crested Butte settled the game down and started to execute their game plan, things started to fall into place for the Titans to turn the game in their favor. The payoff came 14 minutes into the game when Kaiden Marziano followed up on a shot by Jacob Bernholtz to punch the rebound past the Telluride keeper.

Continued pressure in the attacking third by the Titans resulted in a second goal in the 33rd minute when Bernholtz dropped a pass to Jamis Matlock outside the 18-yard box and Matlock drove the ball low to the corner.

“We figured out that they were just trying to lob balls past our defense and run onto them and adjusted,” says Piccaro. “We also eventually started playing our game, controlling the ball, working it to the outsides, as well as up the middle, and showed patience with the ball with some well-timed drop passes for good shots.”

Crested Butte carried their 2-0 lead into halftime but was far from relaxed as they knew Telluride can always climb back into games and Crested Butte had blown a 2-0 lead earlier in the season.

“The half time message was pretty clear, keep moving the ball, keep playing hard and it was time to show the other team, as well as themselves, to take the big next step forward and dominate the remaining part of the game versus letting the other team back in,” says Piccaro. “It was time to grow up.”

The Titans struck again four minutes into the second half when Bernholtz took a quick shot off a set play to pick the upper corner catching the Miners off guard. That goal energized the Titans as they were able to continue their efforts with a little breathing room. Titan defenders Otto Billingsley, Finn Ramsey and Ace Gaither left little room for the Miners’ strikers to attack and the midfield trio of Matlock, Brendan Hartigan and Nathan Sawyer were quick to close down and push the ball wide.

Crested Butte tacked on a fourth goal 11 minutes later when Ben Barney got on the end of a corner kick for a volley bound for the back of the net. The Telluride keeper made the initial save, but Hartigan followed to tuck it home. The final strike for the Titans came in the 28th minute of the second half as Baden Garmhausen found some room to blast a low hard shot sealing the 5-0 Homecoming win.

“It was a very important win, not only for standings in the league but also it was important for the team to realize that all the new stuff we’ve been working on and with more intensity in the last couple weeks was paying off and that we had to keep staying with it,” says Piccaro.

Crested Butte heads into a stretch of non-league play this week with two massive tests as they face Gunnison and last year’s 3A state title champions Roaring Fork.

“We need to continue to work hard and develop as a team,” says Piccaro.