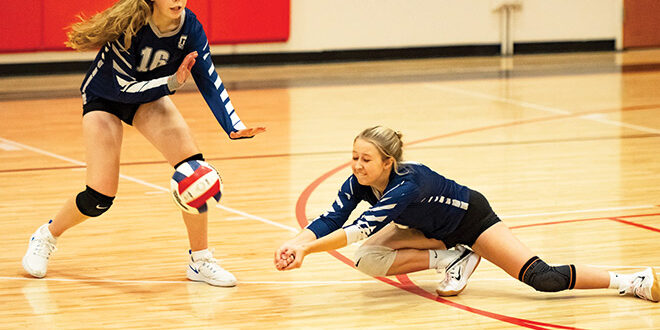 “It was the best competition we’ve seen all season”

The trials and tribulations of a hectic opening to the season has worn on the Crested Butte Titans volleyball team as they rolled out of preseason workouts into a front-loaded start to the season with matches stacked up. That, matched with the youth of the players, started to take its toll last week as they prepared for a tournament in Gunnison on Saturday, September 3.

“We had a hard week leading up to the tournament with injuries plaguing some of our starters,” says coach Marla Covey.

The Titans opened the tournament at 8 a.m. against Olathe and struggled against the stronger team to fall in straight sets.

“We started out slow but played better as the match wore on,” says Covey.

Crested Butte continued their upward trend when they returned to the floor to face the Nucla Mustangs. Nucla has started out their season stringing together a series of wins, but Crested Butte stung them in the opening game of their match to win 25-23.

“We had Annie Collins back and she gave us a new presence on the court we didn’t have the week before,” says Covey.

The Mustangs fought back to win the second game 25-14 and force a third and deciding game and then sealed the win with a 15-9 win to take the match.

“Ellie Duryea was solid and a great passer in the match, she is the quiet leader of the team,” says Covey. “We played better as a team against Nucla we just still can’t figure out how to win. I feel like we still play not to lose.”

The Titans then closed the day out against the Telluride Miners. Crested Butte has struggled against the Miners in the past and those troubles continued on Saturday as the Titans fell behind 10-0 in the opening game and were unable to climb back.

“We just got ourselves in a big hole right at the start and couldn’t climb out of it,” says Covey.

With injuries starting to flare up among the players, Covey moved some players around to keep them from aggravating their injuries anymore and provide some fresh energy. And while the move did provide some lift for the Titans, it wasn’t enough as they lost the second game and the match.

“When we changed the line up around, we did play a little better,” says Covey.

Overall, the Titans battled through what Covey felt was a tough day, injuries or no injuries.

“It was the best competition we’ve seen all season,” says Covey. “We did get some freshmen on the floor and they stepped up.”

The Titans get a break the next two weeks with just two home matches. They host Trinidad in Mt. Olympus on Saturday, September 10 at 2 p.m. and then remain at home to host Sanford the following Saturday.

“With Sunday and Monday off and just one match this week and one match next week, we’re hoping it will help the girls heal up,” says Covey. “It will also give us a chance to fine tune some things, work on some skills where we are lacking and try some new line-ups.”