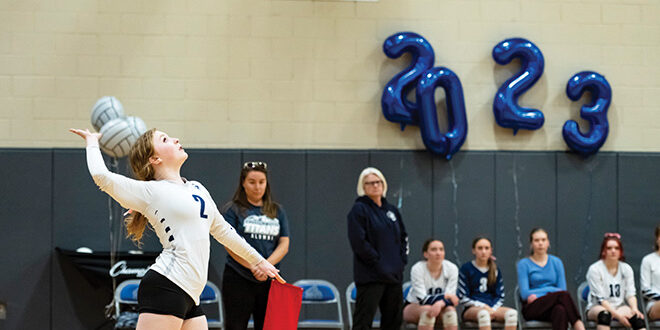 “There’s a fever for playing volleyball with these kids”

It was a week of mixed emotions for the Crested Butte Titans volleyball team. On one hand, they rattled off a straight set win over Ridgway to build momentum for their final match of the season against Gunnison. Unfortunately, they closed out the 2022 year losing to Gunnison but still finished with more wins than the program had the previous two seasons combined.

It had been three weeks since their last match, including a week of no workouts over the October Break, but coach Marla Covey was surprised by what she saw from her players when they returned to practices following the break.

“You never know, but I was amazed,” says Covey. “They all came back rested and ready to go. They actually motivated me a bit.”

The coaches seized on that energy to continue developing the team from top to bottom with the Ridgway game coming up, all the while keeping the future of the program in mind as well.

“We used the time to work on our offense and bring both teams together to elevate the JV for next year,” says Covey.

That energy carried into their home match against Ridgway as the Titans came out slow but soon found their rhythm to open the match winning the first set 25-21. The Titans maintained that level over the course of the next two sets to win 25-14, 25-16 and take the match. Paige Stewart had a standout match from the service line rattling off 14 service points.

“It was nice to show themselves they can win a match in three,” says Covey.

The Gunnison match on Thursday, October 27 was a different experience. For starters, it was Senior Night with a pre-match ceremony honoring seniors Blakeley Reynolds, Ellie Duryea, Grace Birnie, Paige Stewart and Fiona Feier.

“Senior Night is always a big emotional night,” says Covey. “It always makes the first game of the match tough.”

That proved true in the first game of the match as the Titans fell behind 7-0 against a strong Gunnison squad and struggled to climb back in falling 25-14.

Crested Butte shook off the initial emotional wave from the first game to put together a better effort in the second game. Kills from Reynolds and Duryea helped energize the team, but Gunnison was spot on limiting mistakes and dropping crafty tips to win the second game 25-17.

The Titans continued to build and when Annie Collins opened the third game with a block, things appeared to swing in Crested Butte’s favor. Gunnison had other plans though as they went on a 6-1 run to build a 7-2 lead when Covey called a timeout.

The Titans battled back into the game to pull within one of Gunnison until service errors by Crested Butte and the play of Gunnison proved too much for the Titans as they dropped the final game 25-17 and the match.

“We just couldn’t seem to maintain our serve and you can’t win if you don’t keep your serve,” says Covey. “I do think the seniors stepped up and started hitting better. I don’t think we played our best that night, but I think we played well overall.”

The Titans did finish the season with their most wins in three years and Covey understands that the season was tough, but the future looks good.

“It always hard for the upper classmen to deal with new coaches, it’s never fun,” says Covey. “I do think a lot of the players are starting to figure out what we as coaches expect and figure out the team aspect.”

Covey looks at the younger players as an opportunity to keep the team on track as several got massive varsity experience this year and she is looking forward to next year along with her sister and co-coach Sheri Covey.

“We will only have one senior next year but a lot of sophomores that got a ton of experience,” says Covey. “I think we both would like to come back and see where we can take these kids. There’s a fever for playing volleyball with these kids. I think they just need a few years of consistent coaching to build the program.”