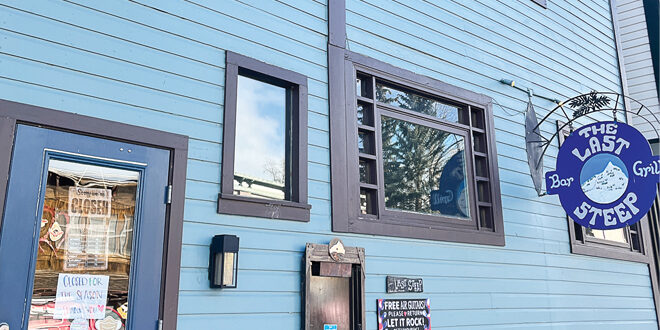 Steep likely closed most of the ski season….

If it seems like there is a rash of recent Crested Butte restaurant issues centered on commercial kitchen hoods and exhaust systems, that’s because there has been.

During the last several years, a noticeable number of local eateries including the Last Steep, the Slogar, Soupcon, the Sherpa Café, the old Divvy in Mt. Crested Butte, the Coal Creek Grill and the CB South General Store have all gotten into hot water over deficiencies because of their kitchen mechanical systems.

Crested Butte Fire Protection District fire marshal Ric Ems said that over the last three to five years, they have all to some degree repeatedly failed their cleaning and/or inspection reports and therefore received orders to fix the commercial kitchen deficiencies in a timely manner or be shut down. And while many have addressed the deficient issues found during inspections and remained open, others have found the cost too prohibitive and taken a different path. The Divvy for example left its spot in Mountaineer Square and started its “ghost kitchen” while the Sherpa Cafe is looking at purchasing its own space at the Four-Way Stop corner in Crested Butte and leaving its rental spot in the old Grubstake building.

Ems explained that the fire department performs inspections as per the adopted codes and NFPA 96 (National Fire Protection Association 96 is the industry standard for the cleanliness and maintenance of commercial kitchen exhaust systems) within the boundaries of Crested Butte, Mt. Crested Butte and Gunnison County and is empathetic when deficiencies are found. He pointed out that so many of the restaurants have been in the same buildings for decades and the systems are not exactly 2022 state of the art. So for example, when informed that kitchen hoods might not be up to code, the district gives them plenty of advanced warning and time to address the problems.

“Unless there is an imminent threat to a fire hazard or life safety issue, we always try to work with the building owners to give them plenty of time to address the deficiencies,” he explained. “We don’t want to ever shut down a business, but if these deficiencies go unaddressed and/or increases the fire risk to life and property then it is our job to take appropriate action.”

Just because so many restaurant businesses and buildings housing restaurants have changed hands of late, Ems said that doesn’t trigger additional inspections so the inspection requirements and timelines by the CBFPD remain the same. He did acknowledge that a lot of the local systems have outlived their life expectancy which has led to finding more deficiencies noted in the hood cleaning and inspection reports. Ems emphasized that the issues are not uncommon with restaurants but there are requirements that need to be corrected in a timely manner. Generally, the inspections find some issues, but he said most have minor deficiencies that can be addressed in a timely manner.

Ems also noted that what might have been a $20,000 fix a few years ago, is probably now at least twice that given increases in cost. He said some people have put off fixing the deficiencies even when the fire department has given them several extensions to correct the situation.

Crested Butte restaurant entrepreneur Kyleena Falzone is a partner (with property owner Jeff Hermanson) in the Last Steep, the most recent Elk Avenue restaurant to be shut down over kitchen hood issues. Falzone said she agrees with Ems that the age of the kitchen ventilation systems in town is a major factor in so many of the closings.

“As a restaurateur I want to have the safest, most efficient hoods in all our establishments,” she said. “Unfortunately, the planning and installation takes a while. You have to rip the whole thing out, rip out the walls, get an architect, an engineer, then coordinate the installers and the inspectors. On top of all that, we are dealing with things like supply chain issues. It is not a fast thing. And it’s not cheap.”

She said that if the whole process went perfectly, the Steep might be able to get open in March. “Our hands are tied, and we certainly didn’t want to close the restaurant. It wasn’t up to us,” she said. “But given the age of the system, it is time to do the upgrade and get things compliant and safe. We are trying to run a professional restaurant and be safe and that takes money and time. We want to do things right. We are focused on getting it open and working with the fire district and the town to do it right and be safe.”

Ems said he understands that it takes significant time to correct kitchen deficiencies and unfortunately once a deficiency is not addressed in a timely manner an order is issued to close the establishment.

“It is just an unfortunate part of the timing involved,” concluded Ems. “It is a big process to address the deficiencies found in a hood cleaning and/or an inspection report. But for the fire district, our focus is always fire and life safety.”