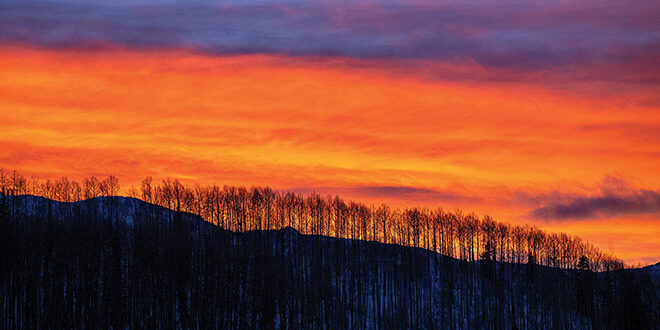 The official start of winter after the solstice is oftentimes rough and this year it started with a howling blizzard. But that didn’t stop the Green Man from lighting an early morning bonfire (see page 23). We are hearing of pockets of the crud and COVID popping up but given pandemic experience, precautions at the Nordic Center for example are in place and making things work. Holiday stress is real, and travel can be “interesting,” as anyone flying Southwest will tell you.

But this can also be a time of gratitude and deep breaths. Look around. Take in the sunsets and beauty of these high mountains. We missed the mid-December pow but real snow started Wednesday with more in the forecast. A bump in tourist numbers is expected through the first week of January. That busier but not over the top buzz is expected to make up for the weirdly empty time around Christmas when Elk Avenue always had plenty of parking spaces and there were no, zero, nada, zippo, lift lines for the Christmas weekend…

Light is so important this time of year and we’ll touch on some local political topics in a second, but I always need to mention that as we enter a new year, the days are getting longer. Right after the solstice we were getting an additional few seconds of daylight every day. By January 11 we will be experiencing about two extra minutes of light a day and in mid-February there will be three more extra minutes every day! Feel blessed and grateful for the light around us. That’s why the Christmas tree and Hanukkah lights are important this time of year. Throw in the early morning sun angle that makes the snow crystals sparkle and there is plenty of light to absorb through those deep breaths.

Now onto the interesting political stuff…

It seems the Mt. Crested Butte town government could use more than a few deep breaths. As I communicated to a few of the town councilmembers up there this week — “Is it a sh*t show in Mt. CB right now or does it just look like a sh*t show, because it sure looks like one.” Not all of them appreciated that holiday greeting that admittedly could have been sent with a bit more light but it is what it is.

Three of Mt. CB’s top officials will be leaving before the start of the New Year with a reshuffle of some of the other staff. The council appears split on tone, policy and perception of where the town stands and where it is headed. The town manager, who stepped in after a tumultuous time to bring some stability to the job, seems to have gotten a push and is suddenly leaving along with one of the top people in the planning department who retook a job at the county. The town attorney suddenly submitted her resignation over the holidays as well. Whispers are that there are more in the ranks thinking of following suit.

While no one will officially confirm the next step, it seems pretty obvious that the town’s top planner is likely to get appointed to the manager seat since he seems on the perpetual yo-yo string of sitting there in an interim capacity. He has local experience and knowledge and is smart enough to pick up his game with the challenges that come with the job but to be successful he’ll need some deeper stability that isn’t exactly solid at the moment. Heck, the picture being projected right now is sort of like someone filled a Christmas stocking with goo and blew it up to see what would happen.

Mt. CB mayor Nicholas Kempin would say only that “our council’s decision-making process has had some sharp turns. We have lost some people as a result.”

All this comes while the town is working to right the wrongs of Homestead and the council has now agreed to apparently spend a lot of money —$750,000 — to buy back partially developed land they gave away for housing. We’ll tell you more about the details when we find out, but no one is rushing to answer our questions as they catch up after the holiday break. Maybe no one knows who has the authority to tell us anything. I promise we’ll know more by next week and as I finish writing this on Wednesday, the agreement has been emailed but no one answered the questions we sent with the request. Maybe more light will emerge as a result of the latest explosion but we’ll see.

Add to that, all the ‘planning’ projects in the pipeline — the settlement with the tragically broken Homestead affordable housing project, a close to approved North Village plan, a fresh Prospect proposal that is getting some pushback, a new master plan update that upset some residents and has again gotten tweaked, just the regular business of running a town, and deep breaths are certainly in order.

One councilmember answered my question indicating that maybe I should be the one to take a deep breath and that the current situation ‘just looks like a sh*t show’ and the town’s direction is positive and solid. Ok. Another said the sh*t show description was accurate but added that such shows don’t last forever. Time will tell.

Downtown, it is almost the opposite. The Crested Butte council has become so efficient and logical it feels to me that it can sometimes get ahead of itself. I’d suggest the Crested Butte council could take a breath and find the time in January to further comment publicly on the county’s proposed Whetstone affordable housing project. CB has weighed in with an initial comment letter and seems to have influenced the minimum percentage of deed restrictions in the development (a minimum of 80%) along with pushing for a strong transit element (including a roundabout with an underpass) to the project. Both of those are good things.

Citified building locations, the big public concern, can shift easily in the preliminary plan phase but it seems more appropriate to me to have the deeper public discussion over the numbers involved while in sketch plan review. At 231 potential units (and that may be the perfect amount), I assume that will provide a place for around 400-500 new full-time residents. That would be on top of the Sixth and Butte housing project that should come in first that will add another 150 residents or so. The unit count — and just as important, the timing of their construction — drives everything from water and sewer needs, building numbers, sizes and location. More importantly it drives the eventual impact on the town of Crested Butte and the entire North Valley of which the council is seen as a leader.

While the controversial Brush Creek proposal was a different beast and had a major personality friction component, the ramification of population numbers on the North Valley services drove the discussion. Hundreds of new full-time North Valley residents will put pressure on the CB school classrooms, the nearby trailheads, the cops, the town roads, the highway, the park facilities in town, etc. If the development is deliberately phased, which would make sense and seems to be the expectation of town officials, I would think the town could be discussing certain triggers associated with the new growth. Off the top of my head for example, perhaps after 150 new family units are constructed, the owners of the Brush Creek parcel should have to start talks with the school district for a potential new middle school campus on the site.

It seems to me the council should be talking about numbers and impacts publicly with the county during sketch plan — before a Request for Proposals (RFP) is solicited from developers with that bottom line unit number. Numbers and the timing of when they become reality, seems foundational during the initial sketch plan review.

It was a bit ironic to me that the CB council had a long discussion at their last meeting over the Post Office bursting at the seams and indicated they were willing to assist the USPS by potentially offering some town-owned property for a new PO site…but adding 400-500 more people at Whetstone and 150 or more at Sixth and Butte and potentially more in the North Village will cause the need for a lot more PO boxes and might take more than that one piece of property to address.

As we enter 2023, the ongoing issues of a growing resort community are not going away. The challenges might be magnified during the cold, dark days of late December and January. But take heart that the days are getting longer. Real snow is on the way.

Be grateful to be here.

Safely ski the fresh from the unsettled atmospheric river.

Take a deep breath and absorb the light that is here…