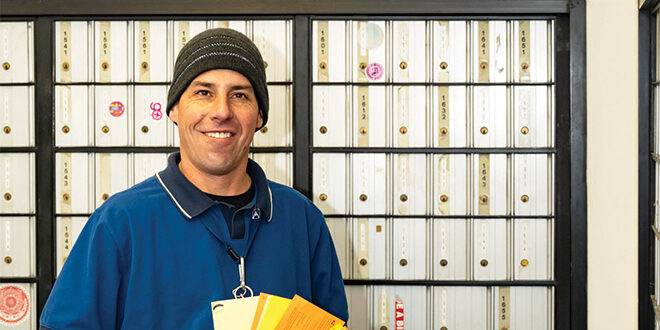 From behind the window at the post office counter, mail clerk Shane Palmer is handing out mail, stamps, packages and smiles, and he pretty much knows every local face in that notorious line since he’s a 20-year resident. His decision to audition for his rather new position came one day this past summer while Shane was just zoning out, another townie customer picking up his mail in the long and winding line at the PO. Encrusted in work dirt and splattered in paint from his job, Shane overheard a conversation at the mail window between one of the postal clerks and a frustrated tourist. “The employee was explaining in-depth why the lines are so long. I zoned in when the tourist asked why people don’t want to get a job here. The clerk explained it’s a lot of work, a lot of hours, a drug test and people don’t want the commitment,” Shane explains. It was at that moment the proverbial light bulb clicked on and Shane thought to himself, “Why not me? Why am I standing in line? Why am I working two jobs? Why don’t I just apply and then I won’t have to stand in line any more to get my mail, and the pay is probably better. It would be like one-stop shopping. I could work here and also get my mail.” It was most certainly the logical thing to do, just like his decision 20 years ago to leave college and home to move to Crested Butte and live the ski bum dream in paradise.

Born and raised in Albuquerque, New Mexico, Shane had enrolled at New Mexico State University after high school but felt it just wasn’t for him. “After a year, I just wasn’t finding my thing. I wasn’t really ready. I was too young.” So, he moved back home and attended a local community college for a semester. “But I was itching for something else,” he confesses and fortunately, his dad, also an avid skier, encouraged him to take the year off to go ski Colorado. Back in the day, both Shane’s parents were, he says, “The bees’ knees avid skiers. When I was a kid, dad would pull me out of school every now and again to go ski Taos.” His dad suggested he head to Crested Butte where Shane’s aunt Linda and uncle Dan Palmer lived.

“The first time I got a taste of CB I was 15 years old at my uncle’s and aunt’s wedding. Ten years later I was asking myself, what am I doing with my life and dad said, give CB a shot, so I did… and I did it well,” Shane grins.

He was 23 in 2002 when he arrived back in the town that impressed him as a young teenager. “When I was 15, CB was amazing, so much trust in community. I was given a bike to ride around town and told, ‘see ya at dinner.’ I got the laid-back vibe,” he says. By the time he returned in his early twenties for his year of ski sabbatical, his aunt and uncle were long gone and he comments that, “I didn’t know a soul. I had put in a resume at Peak Sports, the only Vail operated store in the valley at the time. And I didn’t have a place to live.” He interviewed with Andy Eflin that same day he arrived in town, then went to Clark’s Market and pulled a tag off a flier for a rental and got a place to live in CB South. “I was determined I was going to live here. Securing a place to live was the biggest thing on my antenna.” The next day he had the job at Peak. It was already October and Shane returned home to pack. “Dad was stoked. Everyone was stoked for me, I was stoked!” he laughs. A week later he was back and in training, just before lifts cranked up. Best of all, he got his free ski pass. His employers were great, he recalls, “The first thing they taught us was to have fun with it. I loved my new life.” Shane put in 15 winters at Peak Sports. He also joined the Talk of the Town hockey team for five years.

Before he left Albuquerque, Shane worked in construction painting and after moving to the Butte, he worked for Fred Salas of Premiere Painting, from spring through fall, where he was still employed until he was hired on at the post office this past October. “I learned all aspects of painting from Fred,” he says. When Peak Sports went out of business in 2014, Shane took time off to take care of his mom in Taos, and around the time when she was stabilized, January of 2016, he got a call from his old manager at Peak, who was then with Christy Sports, and Shane returned to work there. He was there through last season. “I saw the writing on the wall, and being unpaid for my skill set. I needed a change. Now I have a badge around my neck and I’m mailing and it’s awesome, and I’m helping out my community. It’s nice to do something rad for our town. Every day I learn more and get better. I’m committed and dedicated.

I’m taking my life to the next level and I like the challenge. The fact is,  I’m in the unique position to step into this and be of help since I’m already living here and living here as long as I have.” And as a bonus, he no longer has to stand in line for his mail.

Shane offers this as a suggestion for those waiting in the holiday lines for post office business, “If you’re patient, it helps everything. Make sure your box number is clearly marked on the things being delivered, like if you’re getting packages from Amazon, because if you just put the street address, it’s going to get sent back. Also, take your mail out of your box frequently,” he explains that the boxes get stuffed, making it difficult to deliver more mail into it. And hey, they can hear you through the walls, so be kind, please and know the CB postal workers are doing all they can to facilitate and expedite your visit there.

These days during the summers, Shane works, skateboards and hits the Barmuda Triangle. “As the years go on, you can’t do that forever though,” he laughs. “I don’t want to look down the bar and say I’m that guy when I’m old. This is the first year I bought myself a pass, because I can afford one now. I’m going to use those federal holidays to go ride and ski and see my friends, my peeps and make sure they got their mail,” he grins. “I’ve adopted this town and it’s adopted me. I love this town. We don’t have the problems of the city, we have small town problems. At the end of the day, we’re still Crested Butte and we all love each other, so give everyone a little bit of space and a little bit of patience.”

Share
Previous WHERE are they now? The Feral Children at the End of the Road
Next Titans hockey remains hot through weekend games