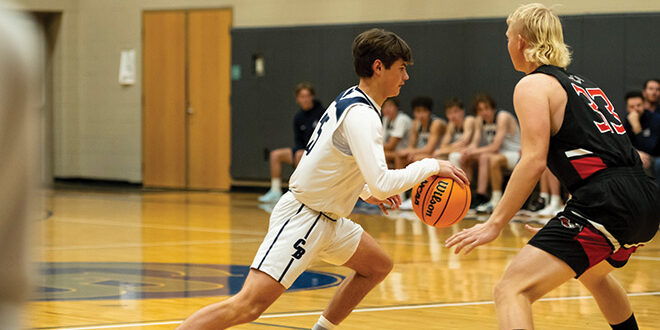 “We have the tools and the mentality to improve”

It’s been a rough start for the Crested Butte Titans boys basketball team as illness ran rampant through the team during preseason workouts slowing down the process of building fitness and gaining some rhythm amongst the players. They pressed through though to get as ready as they could and headed to Telluride on Friday, December 2 for their first game of the season.

“I don’t think we were ready without enough practices and had not yet built any cohesiveness,” says coach Hannes Gehring. “But the kids were mentally prepared, and I was proud of that.”

The first quarter was slow, to say the least, as both teams struggled to put together much offense as the Titans took a 4-2 lead by the end of the opening quarter.

“That was not surprising given it was the first quarter of the season,” says Gehring.

The game opened up in the second quarter as the two teams traded baskets through the entire quarter with the Titans taking an 18-15 lead into halftime.

Telluride came out stronger in the third quarter while free throw woes hampered the Titans and Telluride had a 29-26 lead heading into the fourth quarter.

Gehring flirted with a new defense that struggled when first implemented but as the game wore on, the Titans started to adjust accordingly to cause some trouble for Telluride.

“We weren’t really prepared to execute our zone defense, but they listened and learned it on the court and started to execute it,” says Gehring. “Our zone offense looked good.”

The intensity remained through the fourth quarter and the Titans tied the game up before Telluride hit a couple of shots down the stretch to edge out the 38-35 win. Jamis Matlock led the team with 11 points including back-to-back three-pointers.

“We were lacking fitness, cohesion on the court and missed a lot of free throws which is understandable given the lack of practices we’ve had but these will all improve as the year continues,” says Gehring. “I thought we did rebound really well with tenacity and desire and played with a lot of heart and that’s all you can ask for as a coach.”

The Titans have three games this week including two in Grand Junction on Friday and Saturday, December 9-10. In the meantime, Gehring and the team is tasked with taking steps in the right direction with the limited practices they have in the ensuing weeks.

“We have the tools and the mentality to improve,” says Gehring. “It’s going to be an interesting puzzle to figure out how to solve issues with limited practices between games.”

To that point, the Titans rebounded to edge out a win over North Fork on Tuesday night at Mighty Mt. Olympus.