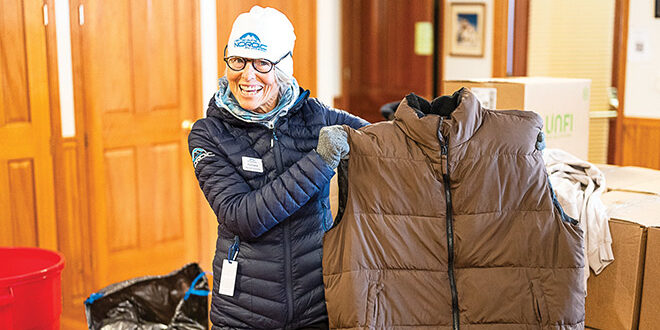 106 boxes of winter gear headed to those without heat

It has no doubt been consistently cold in the valley with regular overnight temperatures below zero and daytime temps barely getting to the double digits at times. And while it appears it will be warming up over the next week, think about living under those conditions with little to no heat in your house…for months. That’s the situation for many in Ukraine, and perhaps given the understanding local residents can relate to with dramatic winter conditions, a huge outpouring of support for people in war-torn Ukraine quickly materialized here in the last couple of weeks.

A quickly organized coat drive put together by Crested Butte resident Beth “Hurricane” Carter resulted in an amazing 106 boxes of winter clothing being driven by U-Haul to New York City this week by Kate Seeley to catch a container ship leaving port on December 21 and heading to Ukraine.

According to various global news reports, Vladimir Putin and his Russian military continue to bombard Ukraine in a strategy to target Ukraine’s vital infrastructure and knock out power and water facilities ahead of the country’s brutal winter.

“For those currently living without heat, this shipment will make the difference between life and death,” Carter said. “This project specifically concentrates on those who have no other means to survive. The news of the dire winter ahead in Ukraine is particularly relatable to CB residents. Yuri said the temperatures here are the same as in Ukraine. I try to imagine 24 hours of bitter cold and wind with no relief in sight. I just knew Crested Butte would come through for Ukraine, and 106 boxes proved it.”

Yuri is the domestic coordinator for the organization “Hope for Ukraine” and Carter said HU is finding it hard to believe that a small town in Colorado is contributing so much to his homeland. “My conversations with the U.S. base for “Hope for Ukraine” have been nothing but exciting,” Carter said. “I was told that 20 boxes would work, but 30 would be better. It was fun to give Yuri our final count Sunday. He said, ‘You guys are on fire!’”

The contents of the 106 boxes vary according to what was donated at any specific time. Carter said each box contained at least three insulated jackets, two pairs of boots, base layers, socks, hats, gloves and tights. Infant and kid’s clothing were boxed up separately. Much of the kid’s items were generously donated by St. Mary’s Garage from an overflow it had at the time.

“Rather than do a mass sort-and-pack, for which time and space were neither, the items were checked for their winter worthiness and functioning zippers if applicable,” Carter said. “Thick cotton sweatshirts were included, and many windbreakers were donated—and in combination those would help insulate people. A copy of the CB News was included in the boxes for two reasons: placed face-down on top of the load, a box cutter would hit the back of the paper (and not the clothing), and the recipients could read about our tiny town with a big heart.”

Carter had suggested that donors include a note in the pocket of the coats so that the recipients would feel a personal connection to Crested Butte and the people that were sending them help. “As the schedule got compressed due to a sudden change in the container ship schedule, I could not read the notes in the pockets, save for a few. One notable one included the sentiments of Isaac Arell, which he lovingly translated into Ukrainian,” she related.

According to Carter, “the range of donors spanned the entire community. There were people who themselves are struggling but gave warm clothing, as well as those of more means,” she said. “Non-profits got involved, local retailers, philanthropic organizations and foundations, all gave in quantity. Notably, the individuals that gave by the hundreds, in addition to all the organizations, made for an astounding volume of winter wear that has our Ukraine domestic connection in awe.”

She said the site “Hope for Ukraine” will be chronicling the load’s journey with photos and commentary as it moves east, all the way into the hands of the recipients.

The momentum for the coat drive started first through word of mouth and Carter’s social media. But it ended up being touted in the Crested Butte News and on KBUT and so was mostly concentrated in Crested Butte, and she said the response was extremely positive. Carter noted that since the drop-off was at the Crested Butte Four-Way Visitor’s Center some Gunnison donors did donate there, but she had no way to determine the ratio of CB donors to Gunnison Valley contributors at large. “Next time I will recruit a down-valley lead,” she promised. “But we even had four boxes arrive from New Mexico!”

Seeley was taking two days in the U-Haul to get to the port of New York. Carter expressed concern that Kate would stow away with the 106 boxes to help personally deliver the coats and winter clothing.

“This has, with no exaggeration, been the most heartwarming and overwhelmingly positive event of my life,” summarized Carter. “I thank everyone involved in any way, be that labor, schlepping, folding, boxing, parting with that “special” jacket or sweater, spreading the word, providing drop off and storage, squiring away boxes, providing donation barrels, reaching out on the project’s behalf, writing notes of encouragement to our new friends, loading the U-Haul, trucking to New Jersey, picking up the phone, putting articles in the paper and out on KBUT, or just offering ideas and support to make this my best holiday ever.”

And while it is understandably one of the best holidays ever for Beth, it just might be one of the most important gifts hundreds of Ukrainians struggling in a war will receive this year to survive the heart of a coming cold winter while in the midst of a senseless war.

Share
Previous Titans hockey remains hot through weekend games
Next Cheers to a happy and healthy 2023!