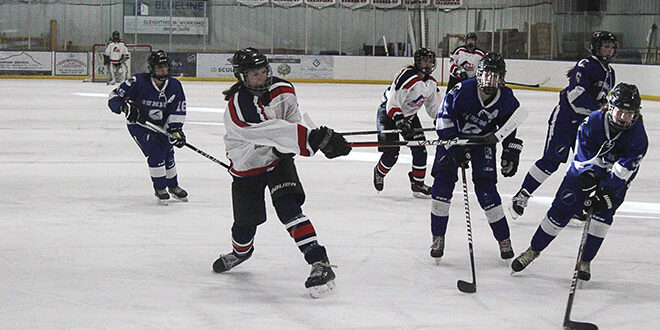 WEHA girls u19 hockey building for the future

It was looking a little uncertain for the West Elk Hockey Association (WEHA) Wolverines u19 girls hockey team as the start of hockey season was approaching in October. Numbers were limited but after some rallying by players, coaches, parents and WEHA, they opened training with enough players to have a team in the Colorado Girls Hockey League for the 2022/2023 season.

“We held some promotional days at the Secret Stash, got the word out on social media and the parents were great in recruiting players,” says coach Alex Stefan. “It’s tough because as the girls get older, there’s no high school girls program so they can’t letter and that’s important on college applications. Girls who have so much talent can’t get recognized, but we’re working on that.”

“We lost a handful of strong players this year to moving away, graduating and choosing different sports,” adds coach Hannah Valian. “We have a very small team this year, only 11 on our roster. This is definitely a rebuilding year.”

Both Valian and Stefan coached the team last year to a 6-10-5 record in the regular season and won one of three games in the post season building momentum throughout the year.

“We definitely got better as the season went on and I feel it was a successful season,” says Stefan.

They opened this year with games starting in November and already had 10 games under their belt before taking a break for the holidays. With a mix of returning veterans and players new to the sport, the coaches have been diligent in creating opportunities for the athletes no matter what their level may be.

“We have such a mix of ability, so we do our best at practices to cater to everybody,” says Stefan.

“I think having such a wide range of skill levels is challenging for everyone, but it hasn’t stopped the team from working together and playing some great hockey,” says Valian. “We have a really strong core to our team, and they have all been great leaders and teachers to the newer players.”

While the team’s record sits at 1-9 through the first two months of play with all of their games on the road so far, the energy remains high among the players at each and every game.

“They continue to impress us with their positive attitudes and hard work,” says Valian.

“What impresses me most is everything they do, they do with integrity,” add Stefan. “A lot of them are playing other sports and they still show up for games and give it everything. They just do not give up.”

Stefan points out they when they show up for games against teams with as many as 20 players, the other coach will offer to give them some players to help, but the Wolverines decline so they can continue to build cohesion among themselves. And, as a result, the coaches have seen massive strides through the first two months.

“They’re finding their groove and play really well as a team,” says Stefan.

“We still have some work to do as far as elevating the speed of our game but I’m confident we will get there,” says Valian.

After taking a break from workouts this past week, they return to the ice for practices next week as they prepare for their next two games in Denver January 6-8.

They don’t get to play at home until Saturday, January 28 when they host Telluride for two games at 11:30 a.m. and 3:45 p.m. in Gunnison. It’s also their senior appreciation day and the same weekend as the Tough Enough to Wear Pink in the Rink women’s tournament.

They finish the season at home as well as the Jorgensen Ice Rink and Events Center has been chosen to host the girl’s hockey state tournament February 10-12.

“It’d be great to have a big crowd to lift our girls to play even better,” says Stefan.

Regardless of results this year, the focus for the players, coaches and program is improvement this season with their eyes on the future of u19 girls hockey in the Gunnison Valley.

“There’s a lot of skill at the younger levels and the next several years will be very successful,” says Stefan.