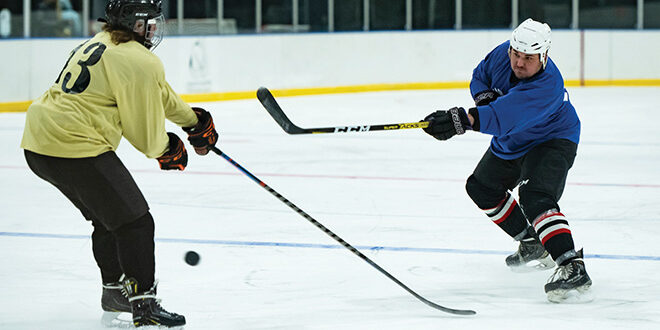 What now this week?

I’ll tell you what, more snow. We are in the crosshairs and it’s a great place to be. Skiing, hockey, sleep, repeat. On that note, Bliss Chiropractic and the Talk of the Town squared off on Wednesday, January 11 in town league action in the midst of a great week of skiing making for some somewhat lethargic hockey, but plenty of scoring.

The Talk of the Town proved the quicker step in the opening minute as Dakota Wiggins skated around the back of the Bliss net to set up Ashton Mabry on front for a 1-0 lead 45 seconds into the game.

The Talk looked to build on their lead a minute later but Bliss defenseman Isaac Evans (that’s the third homegrown talent mentioned so far) hustled back to break up the opportunity. Talk goalie (number four) Nicholas Mikeska then shut down two shots from Bliss, Connor Sample broke up another odd man rush by Bliss and then Mikeska made another save so brilliant that he lost his helmet in the effort. Meanwhile, Adrienne Templeton was doing her best work shutting down the Bliss breakouts up the boards.

But, like I said, it was the middle of local’s ski week (talk about lapping the resort) and those enthusiastic legs of the Talk of the Town started to dissipate opening the door for Bliss Chiropractic as Thomas Mclean and Nick Couts each scored within a 10-second span to pull Bliss on top 2-1 by the end of the first period.

The Talk used the break for a slight recovery and opened with Cody Sexe getting loose for an open look on the Bliss net only to have his shot fly just a little high of the target. Bliss soon returned to the driver’s seat as Jason Keener set up Billy Watson for a one-timer and a 3-1 lead.

Mikeska continued to turn away the flurry of Bliss shots over the next several minutes but could do nothing to deny Evans when he dove for a loose puck to sweep it into the net. A minute later Evans struck again off an assist from Watson and Bliss was sitting pretty on a 5-1 lead.

The Talk finally talked back late in the second period when Erin Kelly (number five) set up Mabry for a goal, but Evans and Watson connected for two goals in the span of 13 seconds building a 7-2 lead with one period left to play.

With ski and work legs no doubt burning, the third period was a bit more subdued. The Talk of the Town showed some late signs of life and when Wiggins battled to get a shot off, Erik Berglund (number six) followed to stuff the rebound in but that was all she wrote, and all I am going to write, as Bliss finished with a 7-3 win.