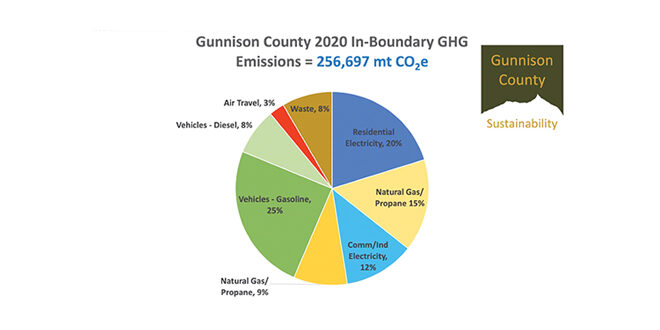 Gunnison County commissioners and their staff have kicked off the new year just as they did last year with a review of the county’s climate actions and goals. Greenhouse gas emissions (GHGs) have decreased across the county by 6% since 2015, and without further action they will likely decrease at least another 30% in the next decade due to an energy grid that is getting cleaner and more efficient. But Gunnison County has a higher average rate of emissions per square foot of built environment than other communities in the same climate zone, so there’s work to be done. Commissioners will consider further actions, including new regulations, this year as they prepare to update their building codes for the first time since 2017.

During a work session on January 17, commissioners received a presentation from John Cattles, assistant county manager for sustainability and operations, to get a baseline on current local climate-related trends and potential next steps toward the county’s strategic goal of cutting 2015 GHG levels by 50% by 2030.

“As a share of total emissions, we are seeing natural gas as a larger proportion of emissions,” said Cattles, because electricity is getting cleaner. “And natural gas cannot really do that, so it will continue to represent the larger portion of GHGs.”

Two years ago, the county rejoined ICLEI, an international group of governments that promote climate action and provide a framework and tools to streamline the emissions inventory process. Cattles said ICLEI’s guidance and advice mirror the county’s climate action plan quite well. “It’s important to understand that we’re on the right track,” he said.

Cattles also said that according to ICLEI, “If we don’t change anything and we just kind of go with what’s already in place,” emissions would decrease by about 37% by 2030, primarily because of utility provider commitments to decarbonize the grid. “That’s significant,” he acknowledged. “But if we want to get to 50%, which is what the International Panel on Climate Change would say we need to do…then we need to do more.”

This would include an increase in the percentages of electric vehicles on the road, and a 5% decrease in overall vehicle use.

“It’s hugely important and it’s actually an area where we have regulatory authority,” he noted. Compared to other communities in the same climate zone, Gunnison County would need to reduce the emissions in this sector by 20% just to meet the average. “We are far above the average in BTUs per square foot,” said Cattles. “Our building sector is not very efficient.”

Cattles reviewed that the county has first chosen to lead by example by addressing government-owned buildings, and could now pivot to more regulatory measures since that work is done.

The steps to take in the commercial and residential sector include improving building envelopes, mechanical/electrical systems and increasing renewable energy production or use.

Cattles said he didn’t think a ban on natural gas would work well for the community, but for smaller units it makes fiscal sense to go electric anyway and all local governments are required by the state of Colorado to adopt the 2021 energy code in the next few years.

Commissioner Laura Puckett Daniels asked about the costs to comply with updated building and energy codes, and staff agreed to come back with some numbers. “Savings outweigh those costs by a large margin,” said Cattles.

Commissioner Liz Smith said that savings opportunity doesn’t always translate well to homeowners, as they may simply pass energy costs on to renters. And county manager Matthew Birnie noted that in many cases, it takes a few years to realize those savings and Americans often sell their homes after a few years making more costly improvements less appealing. He noted that the Gunnison Valley has better longevity with homeowners, however.

“Most of our rental stock was built a long time ago and is not efficient,” said Birnie. “And many people pay almost as much in energy as they do in rent in the winter.”

Cattles said improving those low efficiency homes is trending in the right direction. “The GV Heat program is making a difference in dozens of homes each year, improving efficiency by large margins, sometimes 30%,” he said. The program applies to renters as well as owners.

The discussion turned to brainstorming possible add-ons for the upcoming code updates. There could also be limits to high emissions amenities, or requirements that at a certain level such homes must generate a portion of their own energy.

“The higher dollar homes, even if they have adopted these codes…they often have more energy consuming amenities,” said Pagano. Examples were heated driveways and walkways, additional refrigerators or other appliances.

Cattles concurred that former second homeowner practices of turning the heat off in their cabins when no one was visiting have mostly been abandoned and owners just leave things running while vacant. He suggested limiting the use of heated sidewalks and driveways could be a starting point.

Houck added that building in remote locations in the county could be considered. “Running a mile worth of electric to a building versus running photovoltaic or geothermal makes a difference.”

Other ideas were requiring blower door tests; post-commissioning inspections in which contractors come in after a building is finished to assess how well things are working; and creating an energy consumption allotment and charging fees beyond that allotment.

Cattles suggested they figure out the median home size in the county, and create a fee structure for exceeding the size or energy consumption of that median.

“That would be a mechanism that is very similar to what is done in Pitkin County. Pitkin County has reported the net benefit is that they are offsetting more than they allow. Frankly they have very good reporting, and they have a research-based culture,” said Cattles.

Smith also talked about Summit County’s practice of making pre-approved architectural plans available to residents to help minimize costs to locals who are building and allow for built-in energy efficiencies.

The discussion wrapped up with a few key questions. Pagano asked commissioners to consider if they are interested in going above the 2021 code, so she can get direction on how to approach it with the planning commission. She also asked them to consider whether they would want to create an impact program, in which fees might go toward GV Heat.

“I think there’s some ways we can achieve your policy objectives, and try to thread the needle here. We’d have to be very thoughtful about that. It takes a lot of time to develop this,” said Cattles.

Pagano said it would also be useful to ask how they can make the regulatory process easier, more predictable and more affordable to reduce those costs for the average resident and worker.

Puckett Daniels agreed with streamlining regulations, “So that we’re not disproportionately punitive to folks who are building smaller, more affordable homes…there are still a portion of those folks in our valley.” She also wanted to make sure costs and benefits could be communicated to the public. “I think we need to have really clear example models to show people at every cost level,” she said.

Regarding utility and transportation aspects of GHG reductions, the discussions focused on less tangible immediate plans.

Cattles explained that as a regulated utility, Tri-State Generation and Transmission Inc., which supplies Gunnison County Electric Association (GCEA) has to produce plans to how it will develop energy resources over a long period of time and be held accountable to those plans. GCEA supplies about two-thirds of all electricity in the county, he said, while the City of Gunnison provides the remaining third within city limits and is not regulated and therefore harder to account for.

Regarding the goals to reduce vehicle traffic, Pagano and Cattles discussed the impact of creating more workforce near jobs to improve quality of life and lower emissions.

Cattles and Pagano said they will come back with more information to work with commissioners toward possible recommendations based on this preliminary conversation.

“As much as we’ve covered, we’ve barely scratched the surface,” concluded Cattles.

Share
Previous Where are they now? The Feral Kids at the End of the Road: Tanner Gordon
Next CB council focused on potential utility extension with Whetstone