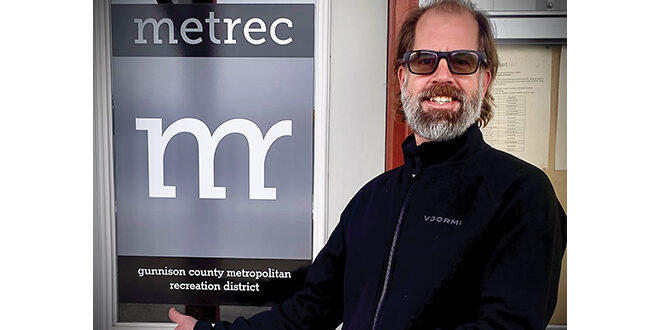 Recreation is front and center

With its budget doubling for the second time in four years after a bond issue was approved by voters last fall and as its mission has become more focused with recreation rising to the top, the Gunnison County Metropolitan Recreation District (MetRec) appears on the cusp on a new era. That’s not to say over-the-air television service in Gunnison County is going away, but that will be a more minor part of the annual budget and as equipment ages, there could be some areas where television fades to black.

Voters approved the so-called “debrucing” of the district in 2018 that allowed MetRec to reestablish to original one mill levy property tax under Colorado law. That roughly doubled the budget from $300,000 to about $600,000. In 2022 voters in the North Valley approved an additional two mills in property tax to be used exclusively for recreation purposes. That too doubled the budget for the district from $800,000 to approximately $1.7 million.

“Budget-wise and in a visionary sense, MetRec is certainly focusing more of its tax revenue and energy on recreation,” said new MetRec district manager Derrick Nehrenberg. “But we have the word “Metropolitan” in our name because we provide more than one service. The district started as a TV Translator District in 1978 and added recreation to the service plan in 2001. MetRec has substantially improved its TV operations since 2018, and it is committed to providing TV operations according to its strategy and policies.”

Since the last election was so recent, Nehrenberg said his first goal has been to simplify the framework of the MetRec grant programs and continue to solicit feedback from stakeholders and the general public. He said the district “has a good grip on the core problems and lever points” so the idea of a North Valley subdistrict tax earmarked for recreation was appropriate.

“The ballot language spelled out the three core funding purposes: capital construction, non-profit operation support and quality recreation experiences (which is tentatively called community collaboration). Looking forward, my general sense is that it will be feasible to coalesce all our funding initiatives into these three recreation grant program categories,” Nehrenberg explained.

“And we can run one annual recreation grant cycle for all three purposes simultaneously in two funds: district-wide and the north subdistrict. I encourage people to check out our website for updates, call or email us with questions, and show up to our regular board meetings and work sessions. MetRec strives for open and transparent processes. We love hearing from the voters and stakeholders and getting a wide range of input especially leading up to our 2023 recreation grant funding cycle.”

Nehrenberg said the MetRec grant applications are tentatively scheduled to be published in April of 2023. At that time the funding will be prioritized. He said that for the Capital Grant Program, “we will do a grant district-wide in 2023. The North Subdistrict capital fund might go into reserves because it may take time to identify which capital projects will generate the most benefit. And we might need time to build up reserves to move the needle on big projects,” he explained. “Examples include parks, field spaces and trailheads. The Operations Grant Program must be spent every year. This fund will go out this year to support the pillars of our recreation community district-wide and in the North Subdistrict. Winter and summer trails are long-standing top priorities. Other priorities, like dance, are certainly percolating with the passage of the bond issue. The Collaboration Grant Program already exists and has funded a wide range of recreation partners across the district over the past three years. It has worked well, but I anticipate it will see some tweaks and improvements.”

As for the television element of MetRec, the district will continue to finance the broadcasts with $275,000 budgeted for that purpose in 2023 but Nehrenberg plainly states that MetRec is focusing more on recreation in terms of budgeting, energy and time. While committed to over-the-air television in the county, Nehrenberg admits that there are hurdles that could impact the amount of service in the future. “There are sites out there that are at the end of their lifespan and would take tens of thousands of dollars to upgrade. One of the main points of failure is that some old towers will not last much longer and the translator equipment on them is antiquated,” he said. “Sites with few users will be taken through a two-phase TV operations public decommissioning process when the site needs significant labor and capital improvement expenses to keep running.”

He said that in the first phase, MetRec will send out a survey by certified mail to every household in a TV translator site service area, asking if they use MetRec TV. The goal is to ensure the district is not mistaken about the TV viewership rates reported in Met Rec’s 2016 and 2020 TV viewership surveys. The new surveys are then shared with the public at a public Met Rec work session to gather more community input and ensure people can be counted and heard. Nehrenberg explained that the board then considers the survey results and work session input and decides whether to decommission a TV Translator site. “If they decide to decommission the site, Met Rec enters phase two of the TV operations plan, meaning we send all the site’s viewers a second certified mailing that MetRec will decommission the site,” he said.

According to MetRec’s operations policy, sites that serve less than 5% of the district’s total residents are not cost-effective, so when they need a major upgrade, they may get decommissioned. Since most of the district’s population lives in the Gunnison to Mt. Crested Butte corridor, sites in the corridor are receiving ATCS 3.0 (next-gen TV) upgrades. The aim right now is to keep all the sites running with the resources MetRec has.

Personally, Nehrenberg said he’s a bit surprised to find himself in the district manager’s seat after serving on the MetRec board of directors. “I did not want to be the district manager initially. I was term limited in May of 2022 and thought I was free,” he said. “After the district spent two months without a district manager starting in July, I stepped in as the interim district manager to help keep a steady hand on the management wheel as the district was heading into the 6B election. During that time, I surrendered to the idea that I might be a good fit for turning MetRec’s vision into a reality. My board experience has helped with the transition because I had already embodied the vision. And, it has given me faith that the wheels of government can move forward surely when we work together and take the right steps.”

Three MetRec board seats will be open in the upcoming May 2, 2023 election. Any elector who lives or owns property in the district can self-nominate themselves as a board candidate. MetRec board member Ian Billick resigned from his board seat earlier this month so the district will be looking to fill his vacancy at the upcoming January 18, 2023, regular board meeting. Nehrenberg said he encourages anyone who is interested in being appointed to his board seat to send a letter of interest and experience to, derrick@gcmetrec.com, by January 11, 2023. The appointed board member would serve until the May 2, 2023, election and can run as a candidate in the election.

“I believe our valley should be a bright beacon of light showing what is possible when caring people work together towards common goals,” concluded Nehrenberg. “Recreation is just one aspect, and MetRec is just one player on our communities’ team. But our vision is to become a vital recreation member of a thriving community. I see MetRec becoming awesome if we work together.”

Share
Previous It’s that crud time of the year: coughing, sneezing, dripping all around
Next Local man charged in bicycle fatality