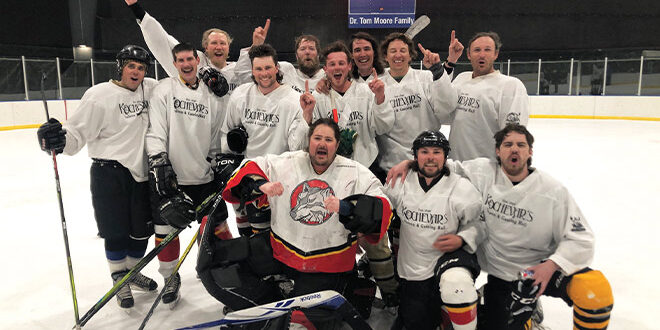 In my random, albeit infrequent, conversations with the general public, I got the sense that the stoke for Crested Butte town league hockey may have subsided somewhat this year. It turns out, that is far from the case. Not only is town league hockey all set for another robust season, but there are more players than ever before with 118 registered for the 2023 season set to start on Monday, January 9.

Last season was quite the throwdown as Kochevar’s was determined to right the wrong they suffered the prior season. After falling in the final minute of the championship game to Clark’s Market two years ago, Kochevar’s lost just one game during the regular season last year and battled through the post season to reach the finals once again and, this time, skate to a 5-3 win over Ska Brewing.

But, thanks to the annual draft, what the Kochevar’s team looks like this year is unknown as managers jockey to secure the same core for success, while still at the whim of the draft format, with the 118 players to be shared among eight teams this year.

No rules changes are in order for the upcoming season and while officials do appear to be available for games this year, local hockey can always use more.

“We’re always needing more officials from the college games all the way down to the squirts,” says Aidala.

He points out that officials can make as much as $50 to $55 per game and if an official works 10 or more games, not only is their USA hockey registration refunded, but so are their league fees for the year.

One thing that never helps the situation is grief so if you want officials for town league, temper your disagreements with their calls. It wasn’t that long ago when the future of the Crested Butte town league was in flux as officials grew tired of the constant complaining.

Regardless, we’re all set for the start of the season on Monday and games will continue throughout January, February and into March on Monday, Wednesday and Thursday evenings at 6:45 p.m. and 8:15 p.m. The single-elimination format playoffs are set to start on March 6, provided temperatures don’t get too high and melt the sheet, and the championship game is slated for Friday, March 10.

See you at Big Mine Ice Arena, thank God.