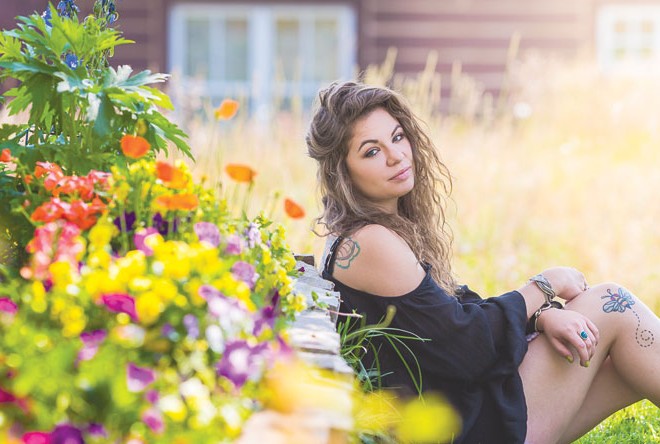 “We live in a web of ideas, a fabric of our own making.”

She calls herself Allie but her real name is Alexandra. In her multifaceted life in the arts, she is the quintessential, although entirely unassuming, muse. A childhood split between here and Paonia with a short side trip to Bow, Washington, for a year, and, as she puts it, an unfortunate three-year jaunt to Grand Junction—Allie was basically born and raised throughout the 1990s in Crested Butte, a smaller town back then, but where she had much creative inspiration and encouragement.

The daughter of locals Ethan Hicks and Kristy McFarland, Allie remembers her first day in sixth grade, back home for good at the Crested Butte Community School. “I remember meeting Katie Vandervoort and we became fast friends, but our whole class was close.” She joined up with the local and much loved Sunshine Girls, Sherrie Vandervoort’s Buttian version of Girl Scouts.

“Instead of earning patches we earned ‘SherBear’ buttons for things like caroling, picking up trash. We’d do benefits and we would talk to people—just small things so we could all get out together. We were in every parade. We wore yellow tee shirts with our buttons,” Allie describes their unconventional uniforms.

“It was pretty much the perfect childhood. We could play all day and our parents didn’t have to worry about us. We took care of each other, we were all friends and we all got along, more or less.” She graduated with her friends in 2009.

From the time Allie was very a young child she knew she wanted to be an artist, particularly a fashion designer. She had her first art show at the age of 18 at the Piper Gallery. She created artwork for Crested Butte’s Local Red band. She also designed the skateboard deck art (the actual board that you ride on) for Brigette Heckel’s Sk8sister. “I went through a phase where I thought, I’m gonna be a chick that skateboards. My friend and I would be at the park at 8:30 a.m. so no one would see us wearing every pad known to man and we tried learning for a while. Then one day, a kid that came up to my thigh dropped into the big bowl and shot out and I thought, nope, this is never gonna happen for me and I’m just going to stick to what I do best,” which, she felt, was dancing and making art.

Allie started training in ballet at the age of eight, during that stint in Grand Junction, and also attended the Crested Butte School of Dance with Heidi Frazier and Bobbie Rheinhart, continuing her dance classes into college at Western Washington University. She chose that college because of the thriving art and music scene and, she confesses, she’s a Metalhead when it comes to her preferred music genre. “I really liked the music that was coming out of there at the time. I was in a punk rock band for a hot second, playing drums and singing, just me and another girl in a band we called Bitch. We had tee shirts we wore that said ‘BITCH’ with arrows that pointed to each other when we were on stage. It was really a concept thing. There were what was called House Shows throughout Bellingham where on any given day you could go watch bands in somebody’s basement. All the houses had code names. I lived in a house named ‘The Champ House.’ It was right next to a gas station, a taco truck and a flea market. We turned our house into a venue so I had different metal bands stay at my house every week. It’s all donations, mostly for gas money for the touring bands, and it was ‘bring your own beer don’t be a jerk’ kind of thing. I play bass now, not exceedingly well, but I do still play.”

When she left Washington, she donated her drum set to Bellingham Girls Rock Camp, whose premise is helping girls to play music with other girls at the camp while actively promoting body positivity and recognizing the social perversions of the way the media presents women.

Music is still a huge part of her life and she has her own show on local community radio KBUT, aptly named The Siren, which has aired Tuesday late nights. But she’ll be moving to a new time slot since she’s also bartender at the Princess Wine Bar on Tuesdays nights.

While in college, Allie went through a phase relatively devoid of dancing since she was so focused on her music, but after attending a Bob Log III show she was inspired by a go-go dance troupe, The Dirty Bird Cabaret. “I thought to myself, I could do that. So I emailed them,” she smiles that she wound up dancing for them. “It was very much unique dance and had an emphasis on choreography. It wasn’t just a bunch of pretty young things looking pretty… there’s nothing wrong with that but it’s not what I would have chosen. These girls happened to be very talented. I could tell they practiced and their dancing aspect was strong, which was what I was looking for.”

Joining the Dirty Bird Cabaret she danced to music of the Cramps, Iggy Pop and other sounds like Tom Waits. “It had a concentration of classic go-go and a modified Charleston Jitterbug style along with belly dancing, classic tap and jazz. We were pretty fun,” she says and in the world that is the flamboyantly colorful show of burlesque dance, costumes and stories, her self-chosen name is Mizz Poly Esther. “Because,” she smiles, “I’ve always liked puns and plays on words.”

When she came back to Crested Butte, she noted that, “Burlesque was kind of slow here. I started reaching out via Camille St. Martin, aka Honey Hoopsey, and the little exposure I’ve had doing Denver burlesque shows has been very positive.”

She explains, “Classic burlesque is more about developing a solo act with a unique storyline with costuming and choreography, which is what I’m moving into more now. Every burlesque dancer has their own name and style, I tend to wear a lot of wigs and I make all my costumes.” The art of burlesque combines all artistry into one outlet for Allie, she points out, “Fashion, costuming, dance and choreography, and art because you’re taking an idea and a concept and making it into something that reaches an audience. The storyline is always more of a classic style, choreography-centric, but my personal concept behind it is that I came into burlesque out of the desire to dance again while challenging my personal stigmas of sexuality and also the way other women view other women who are expressing themselves. I wanted to personally challenge myself in both of those ways. For me, that means creating a separate character who doesn’t really look anything like me in real life. It’s kind of a contradiction but it also allowed me to explore that world without really exposing myself too personally. It becomes less about me as an everyday person and more about my dancing. I think the stigma of body positivity, sexual and artistic expression stems from violence, which is a pervasive social disease. What I mean by that is, in our media and our news we’re bombarded by violence. We’ve become desensitized to violence whereas you rarely see nudity in the sense of bodies being self-loved (self-accepted) at all in films, and pervasive violence promotes the idea that your body is not your own. Violence doesn’t promote the idea that you should respect someone else’s being and person as they are, whereas we’re not given the option of loving ourselves, or someone else, as they are—the idea that you’re not good enough just as you are. I think everyone is both a victim and perpetrator at some time, by exerting judgment on others.

Allie says sketching every day keeps her sane and she keeps a running journal with a lot of her poetry writings. “My journal is mostly drawings, collages, tickets and set lists from shows I go to, lyrical blurbs and streams of consciousness,” she says, and recently she’s changed her mind about thinking she needed to move to the Front Range to expand her options. “I’m going back to school, that’s for sure. The first time I went off to college I wasn’t ready and I resented it. I wanted to be in a famous band and be a famous artist. Success to me now is being able to be accomplished in any and all of my artistic endeavors and be profitable as well, and be my own boss.”

Allie has decided to stay here, in The Shire, and attend Western State Colorado University (WSCU) much to the delight of friends and family. “I’ve been making my own perfume for some time. I make a combination of essential oils that I think smell great. It’s something that I think I’m going to develop because I’ve had a lot of requests and positive feedback. I want to take business courses because every job scenario that I have I imagine being my own boss, so I need the business know how. I very much believe in the universe offering you signs and opportunities and I believe if you hesitate on opportunities then the universe stops giving them to you.”

When Allie went off to college the first time in 2009, she had already witnessed the town undergoing changes and growth, which she partially described and labeled, “The inviting of the big money. Inviting money into our community is good but after the examples of Aspen and Telluride I would hope that the growth of our town is done more consciously. Leaving here worries me because I always wonder if I’ll come back to the same place. I think that anyone who has spent a significant time here, or those of us who were lucky enough to be born here, all feel a little protective about the way the community grows and evolves. My family, the quality of life, the people, it’s really special to go everywhere in town and be surrounded by positivity and active and interesting people—and that’s what keeps me here.”