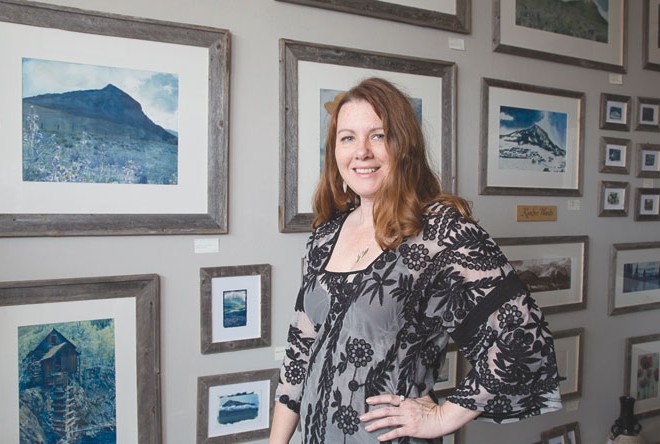 Breaking out of the mold

It was an unraveling that took a long time, the unveiling of a larger world. Kimbre Woods was raised in a strict Seventh Day Adventist family and she would use drawing and writing as an escape.

“That’s what got me through religion,” Kimbre explains that the religion she was raised with interprets the Bible very literally. “I wasn’t allowed to wear makeup or jewelry. Friday night to Saturday night was Sabbath and you’re not allowed to buy, sell, or work, you’re only supposed to do things that basically take in God during that time.”

Raised in Evansville, Illinois, Kimbre attended a “Little House on the Prairie” one-room Christian school with one teacher for twenty-five students, first through eighth grades, which she says was basically all the kids who went to their church. “I was raised to believe that the world was only this big, that I could hold it in my hands,” she says, cupping her palms together. “I had no science. The world is only 7,000 years old, according to what I was taught.”

During the time she actually spent in a public school, from seventh grade through her sophomore year, her science teacher couldn’t believe that she and her sister had no knowledge of basic science, single cells, earth science or otherwise. Her father then sent her off to a Christian boarding school for the remainder of her high school years. Kimbre’s awakening came through for her on the edge of seventeen, she confesses.

“Boarding school was like freedom to me because I went from having two authority figures over me and my older sister to having only three over about 200 students. The odds just got better,” she laughs. “So it kind of felt like moving out.” She graduated in 1993.

“I was on my own. I was finally free of everything. I had immediately moved out of my father’s house. I moved in with a friend’s family whose mother was an artist and a big influence on me. We’d do assembly line crafts, they were very open-minded and joked about how I was raised and that made me very comfortable. They welcomed me and helped me get financial aid for college and even paid quite a bit for my college tuition initially.”

Kimbre enrolled in Oakland Community College in Royal Oak, Michigan, earning her degree in technical photography. “I had been obsessed with photography since I was a little girl,” she said. She had discovered her cousin’s darkroom by accident while playing in his family’s basement. “Walking through the black curtains, the red light, strips of film hanging down everywhere and the smell intrigued me,” she remembers the acrid vinegar-like odor of developer chemicals permeating the darkroom. “That was the beginning of it, at the age of eight.” She was also taken by her cousin’s underwater photography. “I was dazzled by the underwater world,” she says, still wide-eyed with excitement. “There’s something to images with light coming through.”

“I’ve always been a voyeur, I like to peek,” the red haired artist giggles. “Peeking through the lens of a camera is like seeing through a frame.” So, the job she went for was working in the commercial photography industry in Detroit, starting out as a grip girl. “I worked up to a first digital assistant and eventually got to shoot my own jobs. My first published work was an editorial portrait in Chrysler Magazine of the guy who picked out all the car colors,” she says of her Motor City stint. “We would shoot cars and people associated with them.”

She used the lighting techniques she learned in those high profile shots in projects for other clients. “I simultaneously opened a wedding and portrait studio. Because I worked for really amazing top photographers, I learned so much about lighting, which is key. I was freelance, with my own business. For seven years I had the good time raking in big bucks and then the economy crashed.” Kimbre tells that although she still had her own business the work dropped off dramatically on both wedding and portrait frontiers, as well as commercially. “When everything crashed I was thinking I was going to dig in and survive as I always did,” she said. To do that, she started a cleaning business on the side and it allowed her to stay self employed.

“So now it’s time for the romantic love story with Ryan Dickens,” Kimbre blushes with a school girl giddiness. “I went to public high school with him and we were best friends, not dating, I was like his buddy. I really got to know him.” This was before cell phones or internet and the two best buddies lost track of each other after high school. Twenty years later, they reconnected through Facebook and met up in Detroit as he was traveling through from his chosen home in Crested Butte. He tried to convince her to head west to go camping with him. At one point she realized that it maybe was evolving into more than a just a close friendship when she found herself in a dress at her favorite restaurant with him and realized it was a date.

When Ryan finally convinced her to drive with him to Crested Butte, the two drove straight through. “CB was my first stop in Colorado. I was blown away when we drove into town. The next morning we went to Oh-Be-Joyful and had a picnic. I knew at that point I would never go back to Detroit. Something in me realized I was already home and the failing economy in Detroit couldn’t compete with the opportunity of paradise.” Even though she told her friends she would only be gone for three weeks, the couple enjoyed their camp out for three months. They bought a ‘91 Suburban, drove back to Detroit, had a giant garage sale and gave away anything that didn’t fit in the suburban. In 2009, Kimbre moved here and joined Ryan.

“I was immediately impressed with the landscape, environment, animals, and habitat,” the newcomer said, in awe of her new surroundings. “I had never shot landscapes before. I had done gallery work before but never landscapes. It triggered something in me that made me want to get back to the lab (darkroom), which was my roots in photography. The lab was my playground, but I didn’t have the space or ability to create a color or a black and white darkroom so I started thinking about cyanotype,” which is a hauntingly blue tone that can appear either muted or vibrant. “You need very little to create a cyanotype. You need a dim room, which can be anything. You pull the shades down in your kitchen and create a dim room,” she explains and adds that it was easy, “I could use the sunshine to print in. I could pretty much get going for under $100.”

She defines the cyanotype printing as an iron based process.

“Iron is what makes the photograph. There’s always a light sensitive element to photo emulsion and generally it’s going to be a metal. In cyanotype, it’s iron. It’s not the most archival process but it can be made more archival by tea toning it… soaking it in tea. Once you tea stain it, the tea fixes the photographic print.” Another process that she utilizes, and it’s her favorite one, is tricolor gumbichromate, which uses a layering process that builds color up in the paper. “It can take months sometimes for the process to create an image. It was the first color process ever developed.”

For one summer she enrolled at Montana State University in Bozeman specifically for a class with Christina Anderson, a world-renowned gumbichromate printer.

“When I was in that class I was obsessed with printing. I would take over the dim room all night and in the morning everyone would have like one print and I’d show up with twenty prints I had made. I was definitely in my happy place,” she grins. When she returned to Crested Butte, she and Ryan decided to open a gallery. “He’s the business man. He’s been nudging, if not pushing me all along.”

However, feeling that she was in over her head in the art world, Kimbre notched up her education, heading back to the classroom for her BFA, at the University of New Mexico in Albuquerque. It was two harsh winters of driving back and forth “a million times” and returning to CB for the summers and wedding shoots.

She wisely opted to transfer to WSCU in Gunnison to complete her bachelor degree. “I had injected myself into this situation where I was making and selling art but I felt a little inept in the realm of art.” She and Ryan opened the Grubstake Gallery in the late fall of 2013, while she was still very busy in school and with wedding work. “The weddings are never over when school starts and I’m doing all that and in class with a bunch of twenty year olds,” she laughs, but she earned that BFA from WSCU just this year.

Inspired by the French Lascaux Cave paintings, Kimbre created a photo series based on the mystical story where the Shaman goes to a spirit known as “Birdkind” to ask how to save the community from starvation and sickness. “This blew me away because I started thinking about a time when we would consult with the birds for our survival. I started thinking about what went wrong.” She began to draw random patterns in what she calls “primordial ooze,” which was the first place “Birdman” shows up as an image. Using various textures to create her work and series in alternative photography processes such as cyanotype, argyrotype (which originally had mercury in it) and VanDyke brown, a sunlight based process with silver, her results are magical and ethereal.

In her future, Kimbre sees the completion of her series. “I have several series under the same theme, setting everything in the world right. I call that series, ‘To My Daughter, The World.’ I’m excited to keep doing that and see where it takes me. I’m also going to continue my environmental series that’s currently in my gallery. When I first saw this area, I didn’t think that places like this existed in America. In the Midwest everything’s ruined – urban sprawl, contamination – when I started printing the images using these old processes, it made it look like a thing of the past which I felt pushed the concept of their importance and their value, so that when people looked at it they had the feeling that it was already lost and that would make them want to protect it.”

Because of her experience in shooting weddings and portraits, it’s still a large aspect of her business, Kimbre Woods Photography. “It’s something I have been training for for over twenty years. In addition to The Grubstake Gallery, she’s also in Paragon Gallery and is an Artist of the West Elks (AWE).

Kimbre determinately feels, “The reason that I’m not in the box is because I’ve never been in the box. I don’t know what it looks like in there. Seventh Day Adventist is the box I came out of. I’m processing the things that were told to me and I’m thinking of how I can filter it back in a better way.”

Share
Previous Titans cross country looking to shine this season
Next Titans volleyball ‘setting’ up for another season, better numbers