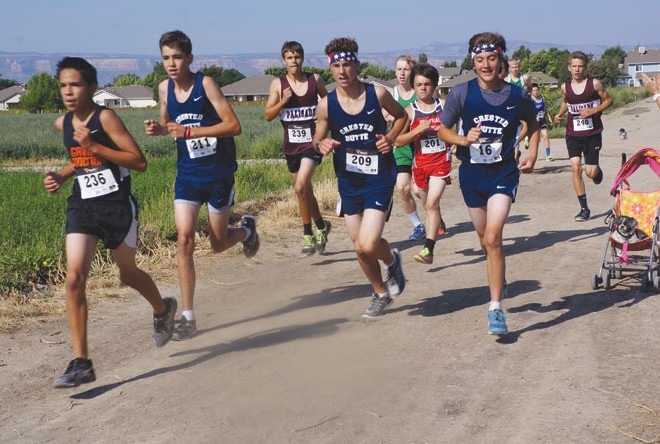 Crested Butte Titans cross country team head coach Austin Ross returns for his second year at the helm with a season of wisdom on his side. Ross admits that his training regimen may have had an ill effect on the team during preseason last year and therefore, made some adjustments this season.

“I learned a lot from last year,” explains Ross. “This year I decided to get a feel for where each runner is at the start and prepare workouts for that.”

“I think it was a strong preseason,” says Ross.

Runners continued to trickle in as the start of the season approached and Ross and Katz now have 16 total on the squad. Broderick and Aiden Truettner, Tara Mortell and Sam Crossett are the core group of returning upperclassmen from last year, track distance standout Sydney Petersen is jumping on board this season and a slew of incoming freshmen are bringing a strong youth movement to the team.

“We have a good group of freshmen and most of our top runners are returning so I think it’s shaping up to be a really good season,” says Ross.

The Titans opened race season on Saturday, August 29 at the Central Warrior Invitational in Grand Junction on a new course complete with alfalfa fields, hay bale obstacles and a ditch jump. With several Titans still getting their feet under them, Ross took a total of 10 runners to the race and was pleased with their effort in the opening race as they battled against larger schools from throughout the Western Slope.

“The people who were able to run did a really good job,” says Ross. “It was a surprisingly strong day for all of them, especially the new runners.”

Crossett had the top varsity result among the Titans coming in eighth place followed by Petersen who battled her way to a 14th place finish.

“For both of them to be in the top 15 is a really strong performance,” says Ross.

Ben Swift was the lone Titan representing Crested Butte in the boys’ varsity race. Swift set a goal leading into his first race of the season and came close to hitting it finishing in 34th place with a time of 20:08.

“It was a good start, his goal was to come in under 20 minutes,” says Ross. “We’ll definitely see him move up during the season.”

“Those three had really good races and will probably bump up to varsity in the next race,” says Ross.

The team is headed to Leadville on Saturday, September 5 for the Lake County Invitational, a notoriously tough course at an altitude of 10,000 feet. While race officials have tweaked the course for this years’ race, Ross still expects a solid showing from his team.

“It’s always a good test and we usually place well there,” says Ross.