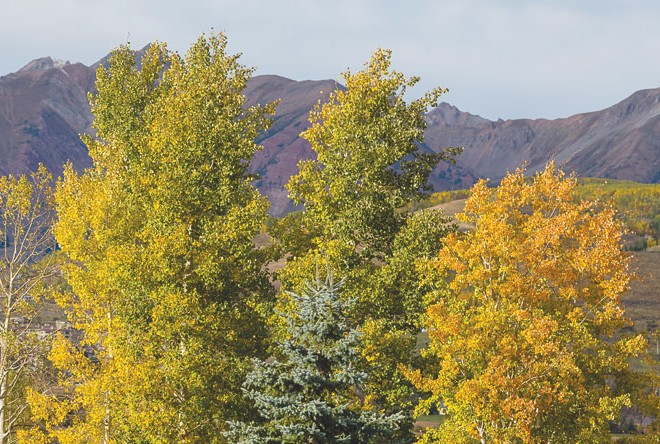 The wet spring and summer had some foresters concerned that fall colors would be less brilliant in Colorado this year. The Colorado State Forest Service warned that some stands of aspen and cottonwood trees were showing signs of leaf spot diseases that could lead to diminished color.

So far, the Gunnison Valley seems to have been spared, with limited affected areas and plenty of brilliant gold beginning to cover hillsides.

This month, the Colorado State Forest Service issued a press release suggesting that foresters were reporting high levels of leaf blight across northern Colorado and the Front Range. Some reports were coming from as far south as Aspen, with at least two fungal diseases to blame: Marssonina leaf spot and the Septoria fungus, both of which can cause dark brown and black splotches on leaves. The damage isn’t permanent—the stand can return to full color next year, but it can make for a somewhat duller fall.

Locally, Gunnison Field Office forester Sam Pankratz isn’t seeing widespread impacts of leaf blight on fall foliage. He’s seen great color throughout the West Elks and near Lake City. “I’ve also been over Kebler a handful of times, and it looks great to me,” he said.

Affected stands have mostly been limited to lower elevations on what Pankratz calls marginal sites—places where trees are already stressed, such as transition zones from sagebrush to aspen. In some areas, prolonged drought has also left trees susceptible to the spread of disease.

“We’ve had great moisture this year, which is fantastic, but a lot of these trees need more than a year [to recover from drought]. The impacts of a 10-year drought are felt beyond that,” Pankratz said.

He explained that the same wet conditions that help trees recover from drought also make it easier for fungal and foliar diseases (diseases that affect leaves) to spread. Many are distributed via water droplets and water splash, which disperse spores throughout the trees. Even above-ground irrigation systems that cast water (as opposed to drip systems) can cause disease to spread.

When water collects on leaves and stays there, there is simply a higher risk. In the tree nursery that Pankratz oversees, he and seasonal staff took to using a stick to shake water from leaves and help prevent disease.

While it is true that fungal and foliar diseases have been spotted in some parts of the state, Pankratz said things vary greatly on a local level, just as the amount of moisture varies.

“Even within this basin we have big variation. Storms come through, and we’ve had some big ones that gave consistent moisture throughout the basin, but a lot of monsoon activity is localized,” Pankratz said.

While he suspects that cystopora canker—a disease that causes aspens to leak a reddish ooze—has spread quite a bit this year, leaf spot diseases don’t seem to be affecting color all that greatly. It’s certainly not prevalent enough to keep tourists and leaf peepers at bay. “Take a look around. Things are beautiful, and looking good,” Pankratz said.

County primary election goes off without a hitch