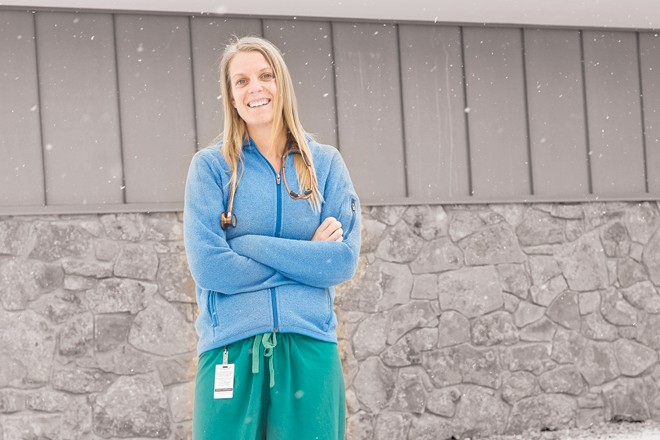 I’ve already delivered a baby in the hospital I was born in,” smiles Dr. Laura Villanueva, who arrived in Gunnison some decades ago to parents John and Mary Holder. Her parents had moved to Crested Butte in the early 1970s and Laura grew up as a Crested Butte kid.

“Through seventh grade, I attended the old brick school and then the new Crested Butte Community School. I was lucky to do high school here because I didn’t have to ride a cold bus to Gunnison every day and there were new, young, energetic teachers here at the new school. I was really free growing up here. I could go to the park by myself, or walk myself to preschool. I feel like we were a pack of wild kids running around town. We could go where we wanted and do what we wanted but there was always someone looking out their window after us, it was more like the illusion of freedom since there was always someone reporting back to your parents.” Like many Crested Butte kids, she started out skiing not long after she could walk, guided by Sherry Vandervoort, aka SherBear, after which she participated in the school’s ski program. Laura graduated from high school here in 2002.

“I knew I wanted to be a doctor from when I was tiny. My dad was a plumber but he’s now a Physician Assistant (PA). There’s a lot of parallels between how the body works and plumbing,” Laura says. She grins broadly, but she has no plans to switch careers and become a plumber. Enrolled at Colorado College in Colorado Springs after high school, Laura majored in biology and Spanish. “I tried to take the minimum of what I needed so that I could do other things because I didn’t want to be all science and physics, so to get a broad education I took things like coral reef ecology, which was my favorite class.”

During her junior year at Colorado College, Laura trekked off to study for a semester in an ecology program in Ecuador. “In the last two months of your semester you do an independent study of your choice anywhere in the country and I decided I was going to study alternative medicine with a shaman and I also decided I wanted to be on the coast. I got on a bus and traveled to the coast but when I got there I realized that all the shamans were in the rainforest, not on the coast,” she laughs and relates that she ended up meeting someone who worked at the local hospital in the tiny fishing town of Bahia de Caraquez.

“They told me they could use extra hands at the maternity ward so I wound up delivering babies there. I was just a college student, not even in pre-med yet, and that’s how desperate for help they were,” Laura says. She felt that the experience confirmed her direction into obstetrics. She graduated with a bachelor of science degree in biology and Spanish in 2006 and decided to come home for a year, “to be a bartender and ski bum, working mainly at the Last Steep,” because she knew med school was going to be pretty grueling.

After catching her breath back home, Laura attended CU Denver Medical School in 2011, and she noted that college, med school and residency takes about 16 years of education and training. When she completed her studies and it came time for her residency, she headed west to Ventura, Calif., having decided that family practice was what she wanted to do and the program there focused on training full spectrum.

“It’s more like up here where the doctors are more old school family practice and can take care of you from the cradle to the grave,” Laura says. “That’s a dying art form these days. It also allows you to go rural or international. At some point I want to do some medicine internationally but it’s got to be a sustainable model and it’s got be the right timing.” She explains that some docs want to go to places like tropical Costa Rica for two weeks, bring antibiotics and asthma inhalers but a month after they leave, those supplies are gone and the people still have medical needs. “I want to be able to be part of a sustainable organization that is set up more permanently in a place, and the impact carefully thought through so that it’s positive and sustainable.”

It was during her residency that she fell in love with doing OB—“The idea that I could take care of a woman who was pregnant, get to know her and her baby before it was born, and to be a part of the delivery process.” Laura feels strongly that the delivery is a sacred process, “and then two days later be the doctor of that baby. You’ve known the mother and that kid for nine months prior to its being born, and then I get to take care of that baby hopefully up through however long I’m a doctor.”

Laura knew that when she decides to start her own family, she wanted them to grow up in Crested Butte, “So I knew I wanted to come back here.” She returned a few months ago in October as an MD, FPOB (Family Practice Obstetrics), ready to start seeing families in the valley. “It kind of feels like you got your training wheels kicked off,” she says of finally being in a practice, working at Gunnison Valley Family Physicians. “I’ve been riding that bike for four years.”

Laura says her residency, like many other learning curves in life, was “a little bit terrifying for a moment, but then it makes you realize, oh, I am trained well and I can do this. It’s just that initial moment when you realize you’re riding on your own and you haven’t crashed.” She also works at Gunnison Valley Hospital in the emergency room and as an inpatient doctor, in addition to baby deliveries and such. “I’m all over the place, which is good because it was one of my goals, to do the full spectrum of medicine.” She tells about how good it is to be back home: “Where you don’t have to look over your shoulder… which is what seeing two or three gunshot victims every day in Ventura will do.”

In 2007, before she left for med school, Laura started dating local Michael Villanueva because, she laughs, “I really didn’t think it was going to last or turn into very much.” As fate would have it, they became quite close, chatting for hours on the phone with frequent visits over the various passes to and from the Front Range. “We discovered we were very compatible and he became a main support for me in dealing with medical school. We spent four years driving back and forth over Monarch and at least in the summer we were able to drive over Cottonwood and meet at the hot springs.” Laura’s heavy school schedule didn’t give her summer breaks. “Michael sacrificed and moved with me when I went to residency in Ventura… but I think it had more to do with the beautiful surf beaches.” They married in Ventura in October 2014.

“It’s interesting having a dual relationship, friends or friends of family that you now have a trusting, confidential patient-doctor relationship with, and being able to maintain both those types of relationships with people. People discuss things with their doctor that they can’t talk to with anyone else. And to keep that sacred patient-doctor relationship and then the next day see them on the high lift… it’s interesting. You know your patients personally and you know present issues in the community, which gives you insight into what’s going on with your patient as a whole. For example, a kid can have a stomachache and there could be 900 things that could cause that stomachache that you can find in a textbook, but it helps to know that that kid had a family trauma or a stressful event that triggered it. It’s an insight into your patients’ lives in a small town that you don’t get everywhere. Although you have to be careful to filter that as well, so you’re not arriving at premature conclusions, but on the whole, the more you can understand that person, it gives you clues as to why they may be having the medical problems they have.”

In her spare time, Laura likes to hang with her long-time girlfriends, Nordic ski in the winter, or do summer hiking, and she’s thrilled that her parents are still here, along with her brother and nephews. “There’s so much to do here. From the beginning, my dad taught me that you have to have balance in your life, you have to be able to turn it off, to be a person when you’re not working…. being here, having family here, and being part of the community.”

Laura admits, “I’m feeling a little bit of reintegration coming back. There are a lot of new faces and I’m used to knowing everyone, but it’s also awesome that there are new people to meet. I’m catching up with old friends and people who I used to babysit are now my patients and they’re like 23 and in college,” she says completely amused and enamored by it all.

“I see me here for the rest of my life, because it’s home. I feel like that says it all. People take care of each other here. We were glad we went to California for four years, to do something different for a few years, and we knew Crested Butte would be here when we got back. I always knew this was home.”