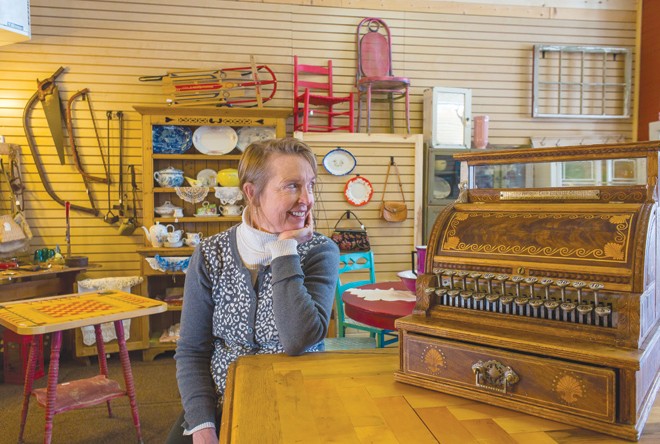 Living at the crossroads

Kathleen Curry systematically fills a shelf in her new store, putting one bag of potato chips in front of another as she marks each with a price tag. It’s been a slow process, but the racks and shelves are looking more and more like an old-fashioned general store arranged with dry goods, boxed foods, snacks and toiletries, items you might have forgotten to pack if traveling, or forgot to buy when you went to the supermarket.

You think back decades ago to Stefanic’s and the scent of fresh meats in the butcher’s case, sawdust on the floor and old wood walls permeated with coal dust. The bells clang against the old door closing behind you as you enter into a crossroads of time. Antiques are Kathleen’s passion, from dressers, tables and chairs, to hand-cranked rotary eggbeaters, tureens and tchotchkes, to metal tools and implements whose use is a mystery to current generations. A wooden cash register with large, round enameled keys seemingly anchors an oak lunch counter lined with both wooden and chromed stools, the latter having been found under thick layers of dust in a forgotten shed and dragged in excitedly by the building’s owner and to Kathleen’s delight.

“I wondered how many little kids sat on them,” Kathleen mused while coaxing back their shine with a prickly ball of steel wool.

Citing a lack of affordable commercial rentals in Gunnison, Kathleen decided to move her former Main Street Gunnison business, The Local Market, to the historic QT Corner of Parlin. The building is rumored to have been built in 1900 on the same spot that pioneer homesteader John Parlin originally built his general store in the 1870s. Keeping as true to its origins as possible, minus the post office and plus Wi-Fi, the place remains basically the same, the QT Country Store.

The support from the locals in its soft opening this Friday blew Kathleen away. “I was so excited, people were so kind. Antiques were walking out the door, and it’s winter off-season.”

The store is a boon to the area folks from up Quartz Creek, Doyleville and the Cochetopa, and between the coffee and the counter, there’s sure to be lively dialog this election season. Having spent six years as a Colorado state representative in the legislature, Kathleen has a daunting insight to the workings of elections and how all the gears are greased.

Kathleen started out in Denver but was raised all over the country since her father’s employer, Texaco, transferred their workers every two years. Throughout those moves, she attended six different schools growing up and graduated from a Connecticut high school in 1978.

“Since fourth grade, I knew I wanted to work in the water field,” Kathleen said. She was motivated by a totally trashed-out, polluted stream behind her Unitarian Sunday school church. “My Sunday school teacher took us outside to clean up the stream and I knew from that time on I wanted to keep water clean.”

Kathleen attended the University of Massachusetts in Amherst, where, she recalls, “I had a blast. I studied agriculture economics and received a BS in agriculture and natural resource economics in 1982. I wanted to work in the water quality and conservation area.”

With many options in the water world biz, Kathleen went into consulting, living in Massachusetts for a couple of years and working for municipalities doing water supply protection.

When Kathleen decided to earn a master’s degree, she returned to Colorado and enrolled at Colorado State University in Fort Collins, where she earned her degree in water resources in 1994. She called this her “long-term plan,” since she gave birth to her son, Joe, while still in school. Three years later, she had another son, Bill.

Meanwhile, Kathleen was working with the state Water Conservation Board. “It’s a big governmental agency, managing water from the supply side, such as creeks, reservoirs and irrigation,” she explained.

But the I-25 commute was congested and nerve-wracking and when a job opened in the Upper Gunnison River Water Conservancy District, she grabbed it and relocated to Gunnison in 1997.

The district covers three counties, Kathleen notes. “It’s a taxing district, with the money being used to protect our water resources. Our main focus is to keep the water on the Western Slope,” which she did for six years before the District 61 House of Representatives seat opened.

“I wanted to continue work in the legislature to protect our water, to continue working on water issues in a way that would benefit our region,” she says, so she ran for the seat and won in 2004.

Politics can be like riding a horse with a difficult gait. Sometimes the ride is enjoyable even if it’s a hard one, and other times the horse throws you. There are some hurdles that you just can’t jump that horse over. After five years of running that steed, Kathleen came to a road that she refused to take the horse down, so she took a different path and left the Democratic Party to become unaffiliated, basically an Independent.

“I was asked by the party leadership to do something that was morally and ethically wrong. I was running legislation that was a health care bill. The bill would have controlled health care insurance costs and keep them from going up too much. It was a good bill for my constituents but my house leadership, the speaker of the house at the time, asked me to drop the bill, to not run it, pull it, withdraw, because the health insurance companies donate a lot of money to the Democratic Party.”

Changing political affiliations was a painful decision for Kathleen, but she felt strongly that the people she represented, her constituents, were more important than those who lined the coffers of her party.

“I felt that it was abhorrent, so I left the party. I’m an independent thinker and I work for the voters, not for the party. I served for a year as an independent and then I ran for office as a write-in candidate,” Kathleen says. She narrowly lost, but the accuracy of the counting of the ballots was questionable at best, and there were valid recorded issues with the recount as well, which she privately had to finance herself. Kathleen had supposedly lost by only 200 votes out of 30,000.

Kathleen decided to run again in 2012, because her constituents strongly supported her, but her district boundaries had been gerrymandered. (Gerrymandering is the act of redrawing the geographical lines of a congressional district to give one political party a voting advantage over another.) In the process, Gunnison County had been split— essentially, Kathleen had been booted out of her House district.

“I was then in a situation where I had three new counties that didn’t know me,” Kathleen points out. After she lost the second time, she felt it was time to leave politics.

“I got the message. What took the wind out of my sails in the 2012 elections was the vicious negative campaigning by the Democratic Party. Flyers, radio ads and billboards—their campaign message was so cruel that I doubt I’ll ever run again. Their message was that I had voted against mammograms for women. Their whole theme to defeat me was to say I had voted against health insurance coverage for mammograms,” she says.

In reality, Kathleen had indeed voted for that coverage. Her “yes” vote was even on record. But the First Amendment allows politicians and political parties to spin words to print and say whatever they need to win an election.

“They spent $300,000 to discredit me,” Kathleen says of the Washington, D.C. election funds used in the local campaign. “But here’s the real kicker of the whole thing: My mother is a breast cancer survivor, so I would have never had a mindset to vote against mammograms when I had [cancer] in my own family.”

Kathleen was asked to be part of a committee to end gerrymandering. “I am honored to have been asked to promote a ballot initiative that would prohibit gerrymandering. This is a bipartisan effort to amend the state constitution to set up a non-partisan process for drawing district lines,” she says. She points out that the redistricting lines are drawn after a census is taken and the next redistricting is scheduled for 2020. The change to the state constitution to prevent unfair gerrymandering would take effect after that, if the voters approve it.

As for her dedication to her service to the district she represented so well, she understandably confesses, “I do miss the policy work but not the politics.”

Kathleen smiles and says, “The point is, I’m not sitting around feeling sorry for myself. I started two new businesses and I’m active in the community. I sit on the boards of the Red Lady Coalition and the Upper Gunnison River Water Conservancy District and I’m also on the Coldharbour Institute, which is a gift of 80 acres of property on Highway 50. Butch Clark partnered with Western State Colorado University to develop the property as an experiential educational institute. They’ll do a lot of water sampling, summer camps, and hands-on agricultural training such as how to raise cattle and hay.”

Having moved on from politics, Kathleen is excited about her new endeavor in Parlin, where she hopes the QT Country Store will become a community gathering spot, especially after she starts slicing up the homemade pie to go with the coffee and conversation that’s sure to take place. She proudly notes that the main draw, as it was in her downtown store, will be her home-grown beef. “Our beef is locally raised, grass fed, Gunnison Valley beef,” which is reflected in her brand name, Tomichi Valley Natural Beef, Inc.

Although Kathleen is quick to admit she’s not a rancher, she did marry one. She met her rancher hubby, Greg Peterson, while working for the Upper Gunnison River Water Conservancy District 15 years ago. Their long-time ranch is known as the Peterson family ranch.

“I married into it and I love the ranching world, but I wouldn’t call myself a rancher. You have to earn that title. I don’t think I have earned it—but I love a rancher,” Kathleen laughs with infectious positivity and adds her hope: “I’ll be able to make the world a little better place from my store.”