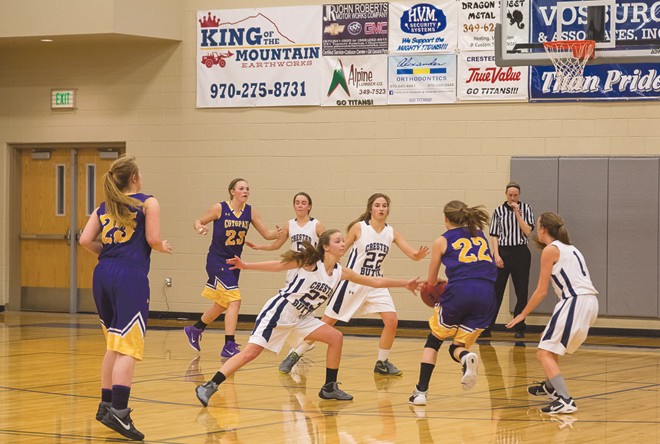 “Once we won the next night was so different”

Good things come to those who wait… and work hard. All season long the Crested Butte Titans girls basketball team has been a work in progress. The season started off on the most basic of levels, fundamentals, and even now near the end of the regular season, fundamentals continue to be the focus.

Meanwhile, week in and week out, the Titans would tip-off against 2A Southern Peaks league opponents, arguably one of the strongest 2A leagues in the state, amassing a winless record. They came oh so close to winning on two separate occasions, falling to non-league opponents Cotopaxi by two points and Telluride by one.

That which doesn’t kill you, will only make you stronger.

The darkest hour is right before the dawn.

On Friday, February 12 in Mt. Olympus all of the Titan girls’ hard work, diligence and indomitable spirit finally came to fruition as they battled to a 28-20 win over Creede/Lake City.

“It was a great win,” said coach Mike Moran.

It was a winnable game but with the Titans’ struggles all season, nothing is guaranteed. And in the opening minutes of the game, it appeared one of their few chances at winning would slip away.

As is often the case with young developing teams, while defense is in place, offense may falter, or vice versa. Or, while offense and defense are working, a stifling press can disrupt both. Friday night, everything was in place—except for shooting, and ice-cold shooting can doom a team.

The Titan defense was tight and supported by a press. So much so that they held Creede scoreless for the entire first quarter.

Meanwhile, the Titans’ offense was clicking. Movement off of the ball was the best it’s been all season and the Titans were able to set up and execute their half-court offense and get open shots. Unfortunately, that was the missing piece, shooting, as the Titans opened the game shooting 0-5 and were mired in a 0-0 tie for the first five minutes of the game.

“Our defense was solid. We had them in control for the most part,” said Moran.

Eventually Sydney Petersen slipped inside for a basket and Siena Truex scored when the Titan press forced a turnover, but that was it as the Titans managed just four points.

Things got off to a better start in the second quarter as Sarah Johnson drained a 10-foot jumper to open things but Creede rattled off five straight points to close in on Crested Butte.

Petersen hit a free throw and scored off a steal to rebuild the Titans’ tenuous lead and while Johnson and Katherine Washburn were working hard on the boards, the Titans just could not pull away from Creede and took their slim four-point lead into halftime.

“We were executing so well and getting open shots. They just weren’t falling,” said Moran. “We made light of it, laughed a little bit about it and talked about getting the ball closer to the basket. Eventually, they’ll start to fall.”

The third quarter then turned into a slugfest and a trial of patience for the Titans as they still just could not put Creede away. Creede opened the scoring with a three-pointer but the Titans responded as Petersen hit a three immediately following. Moran called a couple of timeouts to reorganize things and the Titans followed instructions to go on a 7-0 scoring run and pulled ahead 19-10, but Creede fired back.

Just as Creede was pulling back into the game, including another three-pointer, Lily Talbot buried a 14-foot jumper at the buzzer to give the Titans a 21-15 lead heading into the fourth quarter.

The fourth quarter came down to the seniors Erika Bremer and Tara Mortell. Both had worked hard all game, as they often do, but were relatively silent on offense until the time when it mattered most.

Creede scored to start things off but Crested Butte answered back as quick ball movement found Bremer open on the perimeter and Bremer hit the shot. Bremer followed that by stepping farther back to hit a three-pointer a couple of minutes later.

“Erika hit that beautiful three and that pretty much sealed it,” said Moran.

Meanwhile, the Titans defense was back on point and Mortell finished it off, slicing through the Creede defense to score, icing the 28-20 win.

The win has created a buzz among the team and they carried their momentum into their road game the following day against the South Park Burros.

The Titans faced South Park in a scrimmage earlier this year, losing by as many as 40 points, but the win on Friday had the Titans riding high heading into the game Saturday.

“Once we won, the next night was so different,” said Moran.

The Burros are led by a 6’2” girl inside but the Titans’ defense had her wrapped up while their offense ran plays and were hitting their shots to take a 12-9 lead into halftime.

“We played phenomenally,” said Moran. “South Park had so much more size and talent but we just shocked them and their crowd. It was the best offense we’d executed all year.”

South Park then climbed on the shoulders of their big girl in the third quarter and started pulling away from the Titans.

“I told the girls that South Park will make a run and to just keep your composure,” said Moran. “They just pounded the ball inside and we did what we could.”

Despite losing both Bremer and Johnson to fouls, the Titans battled back in the fourth quarter and were down four points with 20 seconds left and possession of the ball. The Titans ran their offense to score a huge bucket, closing the Burro lead down to two points and put South Park on the line, but South Park escaped the upset loss to win 34-28.

Petersen led the Titans with 16 points, followed by Mortell who dropped in six.

“It was the best game I’ve ever coached in Crested Butte,” said Moran. “The way we battled, the poise we showed. We’re showing what I knew they could do, I knew it was coming.”

The Titans finish out the regular season this week with their final home game on Saturday, February 20 against league powerhouse Sanford.