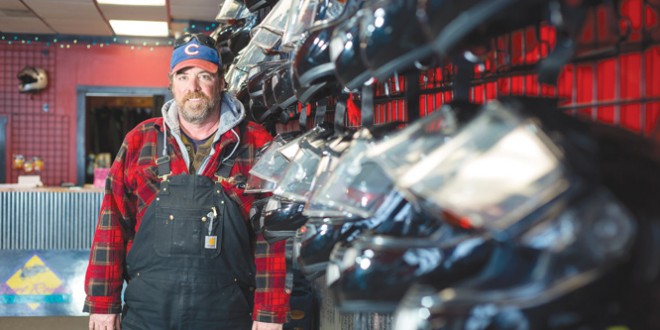 Steve Hecker very much appears to be a walking portrait of the mountain man: a big, burly guy with a smile to match his magnitude, someone you’d definitely want as a guide on excursions into the winter backcountry.

He arrived in the Gunnison valley almost 30 years ago in 1987 when he headed west from Illinois with friends, he chuckles, who were a couple of hippies with a bunch of crystals.

“I had no idea what I wanted to do out of high school. I was working at a gas station all through school and then some, and I decided I had better do something, so I enrolled in Southern Illinois University in construction management. It was an easy curriculum but a failed attempt,” he laughs. With no hint of remorse he adds, “I enjoyed myself a little too much in college, but I made quite a few friends. I left college with a couple of hippie friends and we were on our way to the West Coast, but first we went to Arkansas to mine crystals.

“The hippie friends were way into the metaphysical crystal stuff and I was basically along for the ride, providing the car and U-Haul to transport these crystals to festivals, concerts and whoever wanted to look at these rocks. They were beautiful quartz crystals. We loaded up the U-Haul with about 500 pounds of these rocks,” he says. They headed off to the West Coast to hit up a few Grateful Dead shows in Steve’s little Datsun B210 and a trailer full of quartz crystals.

In the middle of the Colorado Rockies, the trio came to a harsh realization. “We get to the bottom of Monarch pass and my poor little car, named Sunshine Daydream, just couldn’t make it up over, so we had to unload some of these stones.”

They committed the crystals back to the earth, Steve recalls, carefully picking through the quarter ton they had lugged over a thousand miles, and keeping the best ones. “They’re probably still up there somewhere,” he says. He thinks about them every time he goes over that pass.

But it was wonderful springtime in Gunnison as they finally descended into the valley and decided to stop and visit friends who were attending Western State College. “We were there doing what college kids do, standing around a campfire drinking beer and smoking weed. A couple of those students said that I really needed to go up to Crested Butte and check that place out, and I said, ‘Crested what?’”

Since Steve had driven in at night, he hadn’t grasped the beauty of the area and didn’t fully get it until he actually drove up to Crested Butte that next day. “It was apparent that Crested Butte was an extraordinary place. I’m sitting on the bench on Third Street, in front of the [old] Paradise Café and the [former] Laundromat, soaking up the beauty, and a young lady sits down and asks if I’m new in town and I said, ‘Dunno, I’m kinda thinking about it.’”

Steve recalls the young woman’s beautiful French-Canadian accent turned his head as much as the town itself. “It’s off-season and I felt like she and I were the only people in town. It was odd that there was nobody around.” That girl with the accent offered Steve a cabin to rent for $100 a month. “That got my attention. I had to run it by my hippie friends, explaining that we could live in this cabin here. So in a single day I got a place to live, a girlfriend and a job,” which meant a variety of kitchen jobs in the newly transitioned Oscar’s, formerly the Grubstake.

Eventually, his hippie friends headed on down the road, grabbing the best crystals and leaving him with the rest of the pile of rocks.

“This was the beginning of my time here,” Steve smiles about the allure of his newly acquired Buttianess. “I was a young guy, a fresh face, moving to the mountains. It was magical for me.” Even though rent was incredibly cheaper back in those days, and rental places were far more plentiful, Steve would live with half a dozen people at times and when that became too much to handle, he’d pitch a tent up the Slate for some solitude while he worked his typical three jobs.

“The French girl is long gone. I’m working construction, doing kitchen work and operating as a snowmobiling guide,” he says. He notes that the latter is what most people in town know him as. He spent three years with Irwin Lodge, in his first job as a sledneck guide, later moving to Action Adventures when Irwin Lodge sold. Steve tells stories of his 11 years of guiding at Action, sledding around celebrities like president Jimmy Carter and his family. And in 1991, he took the Allman Brothers out to the backcountry—Warren Haynes, Alan Woody, Greg Allman and Dickey Betts—which left quite an impression on him.

“Getting to take these guys out snowmobiling was a dream come true. They were doing a benefit concert at Rafters. Tickets were expensive but they wound up giving me four tickets and a hundred dollar bill as a tip.”

He was invited to hang with them in their hotel room, doing what rock stars do, as he puts it, and he accompanied them to sound check where he recalls his excitement as they launched into their song Whipping Post: “As soon as I heard that first bass line of the song, I thought I had died and gone to heaven.”

Having worked construction for the larger companies in town, Steve felt it was time to strike out on his own. “I felt like I was stagnating and I needed to do something different and take another step forward, so I started my own construction company, Cement Creek Construction Company.”

He started out building smaller homes, and moving up to larger ones when he was contracted to construct trophy homes in 2007 in Prospect on the mountain.

Steve was initially hired by developers to build five houses up there, but the market crashed after the first was completed. Then, midway through completion of the second house, the first one burned to the ground. It was deemed arson.

“Along with the house, my construction company went poof,” he explained. The out-of-state developer never paid for any of the work, and although it was never proven who the arsonist was, the developer took down several people in shady dealings.

The developer later hung himself in a Spanish jail cell rather than be extradited from that country when he was indicted for murder and theft of $300,000 in the U.S.

“And here I am involved with this guy on a daily basis,” Steve shudders. “It was the darkest time of my life. I pretty much lost everything and it left a really horrible taste in my mouth. I got burned figuratively and literally. Everything was so ugly.”

Afterwards, in 2010, Steve had rented the Forest Queen building to run a bar. “I was trying to keep my head above water with the Forest Queen. Running a bar business is a lot like being a rock ‘n roll star… lots of late nights.”

At one point, he actually attended a hot dog school—no, not for skiing, for real hotdogs. He muses that it was a great program, more like a seminar on how to promote a successful hotdog biz. “I’m from Chicago, you know, I love hot dogs. I sold Chicago-style food in the Forest Queen, Italian beef, hot dogs and more. I got a certificate—HDU—Hot Dog University!” Nevertheless, when his lease expired, he decided not to renew. “So, I said to myself, ‘What am I gonna do?’”

He went back to his first love and something he excelled in. “I went to my old friend James with Action Adventures Snowmobile and asked him if he thought it was crazy if I wanted to come back and be a guide.”

It’s now Steve’s sixth year back guiding and he couldn’t be happier about it. “I absolutely love it and it was the best thing for me, especially after all the turmoil. This is where I needed to be. I truly love taking people out into the backcountry and showing them what a beautiful place this is. You get these average Oklahoma and Texas families who’ve never seen a snowmobile in their life and then you get them up into Irwin or some place where there are just these spectacular views. Just to see the smiles on their faces makes it all worth it.”

When summer finally comes to the high country, Steve switches gears and heads for the water. “For the past three summers I’ve worked as a dock hand and fishing guide at the Elk Creek Marina on Blue Mesa Reservoir. That was pure luck to have landed in Sapinero,” he says of his home for half the year before winter takes him back to snowmobile guiding, the perfect yin-yang balance of seasonal resort work.

“There’s no other place I’d rather be. What really keeps me here are my kids [Kyle, who is graduating from WSCU this May, and Natalee, a junior at CBCS] and the relationships I have with my friends, and oh my God, the natural beauty of where we live. I do a lot of road trips but I always feel really great when I get back here. During the off seasons, I load up my van and hit the road to places all over the country, every corner. But I consider Crested Butte my home. I’ve been here 30 years, fer Pete’s sake, I have roots here. There’ve been some difficult times up here, but we’re a family in this town.”