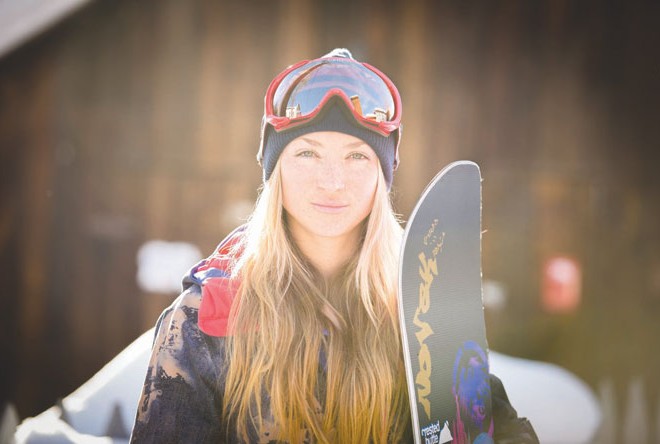 She was born a mountain girl in the foothills, granddaughter of a 10th Mountain Division skier-warrior during WWII, one of the few who survived. Every summer Mary was sent out from her hometown of Colorado Springs for camp in Florissant, where she hiked, rode horses and climbed mountains as a self described “dirty, grubby little kid, for sure.” Her parents were wise in taking advantage of the great outdoors to tire out the four siblings.

Mary admits, tongue-in-cheek, her school years were “interesting… school and I didn’t mix very well. I just wasn’t into the cliquey scenes. Middle school sucks for everyone, especially girls. You’re going through puberty with raging hormones and there’s a lot going on,” she recalls.

She funneled all that young angst into snowboarding at the age of 12. “We were a family of skateboarders,” she says of the passion shared with her two brothers and one sister and fortunately, her parents supported the sport. The family trekked off to A Basin and Keystone whenever they could but Mary understood that as a family with four kids it was an expensive excursion to get everyone geared up and buy passes, and then there was the two-hour car ride with all those kids.

“It sounds like a nightmare, and I don’t even have kids!” she laughs appreciatively for the effort her parents put into it. Once she got her driver’s license she was on the slopes every weekend.

High school for Mary felt like it was going down that same annoying road as middle school but that’s also when she discovered that she was dyslexic. It seemed to explain a good part of the reason she disliked school so much.

She was enrolled in Education Opportunity Program (EOP), which is an alternative school. “Although we who attended called it Expelled Or Pregnant,” she grins. “That’s where things turned around for me. It was really open and because of that, the kids who were there really wanted to be there. They wanted to get their diploma or go to college and it didn’t have that cliquey scene. You got out of it what you put into it and the teachers all wanted to be there too. The classes were smaller so they could figure out everybody’s individual needs. The teachers were real.”

Mary graduated in 2004 and thought about going to art school but wound up in Crested Butte instead. Once she got here, as she tells it with a big smile, “I never left.”

She had arrived with winter shredding dreams in October 2005, convinced by friends that she’d love it, even though she’d never ridden this mountain before. Her first impression of town was, “Beautiful!” A liftie position got her a pass and as Ullr would have it, it was an epic snow year. “I got a taste of being able to snowboard every day and that kinda did me in right there.”

But half way through the powder year, people started talking about summer and convinced Mary to stay past her planned one-winter adventure before the expedition to college. If you plan on being in Crested Butte only for a winter, then never stay for summer. You’ll be hooked and you’ll never leave.

After spending a summer doing all those things we do in paradise, Mary shakes her head and just conceded her fate. “It was all over… I’m still here ten years later. I almost feel that’s everyone’s story here. It’s a hard place to leave. It’s a balance to be here, there are sacrifices made, but it’s worth it.”

That first summer, Mary met Ian Hatchett, who asked how she felt about being a lift op. “I told him I didn’t get to ride much because the ride breaks were short. He offered me a job in the Crested Butte Mountain Resort rental shop and said I could have three-hour breaks. I was sold.”

Mary was stoked. “That’s exactly what I wanted to do.” The friends she made became her guides to the back bowls of the mountain and after a few seasons on her board, in 2009, the Extremes for snowboarding returned to Crested Butte.

“I thought I should represent for Crested Butte and for the boarders… and it went well. I got second and was the first woman to receive the Young Gun Award,” which, Mary explains, is for anyone under the age of 23 who showed potential. “That totally got me fired up to compete. I had never competed before in snow sports.”

The following year, Mary committed to going to all of the competitions on the circuit, from Crested Butte to Snowbird, Kirkwood, and Crystal Mountain, and she earned her spot last year to go on the Freeride World Tour in Europe, competing in Chamonix, Austria, and Andorra in the Pyrenees.

“It was such an out of body experience, the mountains were so big and incredible. It’s crazy, they’re like these indescribable giants. It leaves you speechless when you’re there,” Mary says of the five-week experience. “Riding there was a game changer … scary… riding there, you had to step up your game a lot, mentally mostly. You have to be aware of where you are because there’s a rollover effect. You can’t really tell what’s on the other side until you get there, so it’s important to be in places where you know where you are, and with people who know the mountain. It was trickier to compete because you didn’t get to ride the face first, it was visual inspection only, so you sat with binoculars and picked out your line, hiked up and then, hopefully, do that line. That’s one of the mental challenges that I liked about all of that. You have to really respect the mountain.”

Mary and local competitor Francesca Pavillard-Cain were touring together, helping each other pick out the best lines. “That’s big mountain snowboarding, you have to be able to read terrain. That’s why I think it’s more of a mental challenge than physical. I’ll never forget the first competition in Chamonix, hiking up to the top of the venue and being so close to the helicopters flying around, one for filming and one for evacuation if someone got hurt, and it added a whole new element to the experience. It’s an exciting, humbling experience. I came home with a feeling of opportunity for mountains and life. Staring at giants like that every day, there’s the realization of how small you are in the grand scheme of things,” Mary says with gratitude as well.

Aside from it being an incredible experience of traveling and competitions, Mary feels it was also a pinnacle. “I’m not tapped out at all and I’d like to explore snowboarding in other ways. I bought a new snowmobile this year, just to be in the backcountry and explore our mountains more.”

With an expanded focus to pursue backcountry snowboarding, Mary also has experience in filming. “I’ve been filming for Crested Butte Mountain Resort and for Never Summer Snowboards for five years. Never Summer makes movies every year and I started riding with Andrew Buergin, who’d been filming for a long time,” Mary says of her boyfriend of half a decade.

Austin Gibney, another long time cameraman, is also onboard. The two guys took Mary under their collective wing when they started filming her rides. “We rotate turns doing the filming because we all want to go get our lines,” Mary grins. “We mostly go up into the Irwin area and the Slate and the surrounding trailheads. “So filming is what I’d rather focus on than the competitions.”

But Mary holds her competition days precious, having met many like-spirited, amazing women shredders. “I remember riding around the comps with 20 chicks and they’d all rip, jumping off of stuff. It was a pretty unique experience. I think a lot of us women helped each other grow as riders in ways that might not have happened unless we all met and talked each other up, like, ‘You got that.’”

Another part of Mary’s reasoning in leaving the competition tour is to coordinate trips with her Buttian buddies to just ride pow, because, she says, “It’s all about being with your friends in the mountains. That’s the pureness in snowboarding—giggling with friends on mountaintops.”

However, as a last-minute escapade, Mary signed up to compete in last weekend’s Free Ride World Qualifier held on our mountain—and won first place. She claims that it was all just for fun, to represent Crested Butte and also for fear of missing out. She doesn’t plan to take it any further and actually go to the rest of the comps, but there’s that mischievous curl in her smile that makes you think she could just possibly spontaneously go for it.

“All my homies that I met through the years showed up at the comp Saturday and it reminded me I why I do these!” she laughs heartily. “The people, the riders, and mostly the women. They inspire more than words can express. So—I might try to enter another one….”

Despite her love of winter, Mary does actually look forward to summer too, working as a bartender at the Talk of the Town at night so she can play in the day. “That opened up a whole new world of mountain biking and hiking and I have friends who let me ride their horses.”

It’s perfect employment for her to follow her winter passion as well. “My three days a week of happy hour bartending allows me to snowboard every day and live the life I like. A lot of that has to do with the fact that Joel, the owner, is so supportive of my snowboarding. It’s a good gig.”

Mary feels the Crested Butte mountains are particularly special, “and the people and the lifestyle, you can’t beat it. I don’t see myself moving.” Mary shakes her head and says emphatically, “Uh-uh,” and adds with a giggle, “only if I think about it never snowing here again. Other than that, I see no reasons to leave, but I think it’s important to travel when you live here. You’ve got to get out, in a way, because we can be in our bubble here.”

Mary heads straight for Denver shows and getting her fix of “city grunge,” but she says the best part of leaving town is, “It’s never hard to come home. Nowhere else do you live that you want to go home at the end of your vacation. You know it when you come around the bend by Crested Butte South and see Paradise Divide and you just smile and know you’re home. It’s impossible for me to be unhappy here. You can have a bad day but you can’t feel too sorry for yourself when you go outside and look around.”