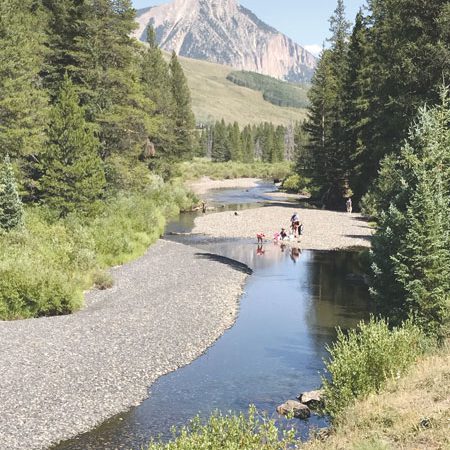 The Slate, like all the local rivers, is running pretty lean right now.

“We are now in severe drought category”

Local water managers decided to reduce flows from Taylor Park Reservoir beginning August 16 in an effort to preserve water storage in the reservoir in the event of another dry winter. Current flows will reduce from 230 cubic feet per second (cfs) down to 200 cfs from August 16 to August 31 and then will decrease to 150 cfs for the month of September.

“The Upper Gunnison basin is now listed in a severe drought category, and the monsoons have been disappointing, so we moved to reduce flows in order to preserve storage in the Taylor Park Reservoir,” said Frank Kugel, general manager of the Upper Gunnison River Water Conservancy District (UGRWCD).

The low flows on the Taylor River prompted water managers to install a water temperature gauge near Almont to monitor conditions for the river’s fish. “We are working with Colorado Parks and Wildlife to monitor the fish population and maintain adequate temperatures for habitat,” said Kugel.

Across the region, water managers have also been managing flows from Meridian Lake (Long Lake). For the past three weeks, there has been an “active call” on Meridian Lake water, forcing managers to release water to satisfy senior water right holders downstream. As of now, Kugel says he doesn’t anticipate a call on Taylor Reservoir water.

When asked whether he was worried about conditions, Kugel said he was concerned. “This is as bad as I’ve seen in 20 years of managing water in the Gunnison basin. It is worse in some places than the 2002 and 2012 droughts,” says Kugel. “The gauge on the East River below Cement Creek is recording record lows, the lowest flows that have been recorded in the 35-year history of the gauge.”

Late summer monsoons have been sporadic and spotty in intensity and aerial coverage, according to Kugel. “We’ve been disappointed in the monsoons. The forecast was for a strong monsoonal season but that just hasn’t materialized,” says Kugel. “Our water storage will deliver for this season, but our main concern is that we experience another dry winter. If that happens, our reservoirs will be overly taxed next summer. We need a strong winter.”