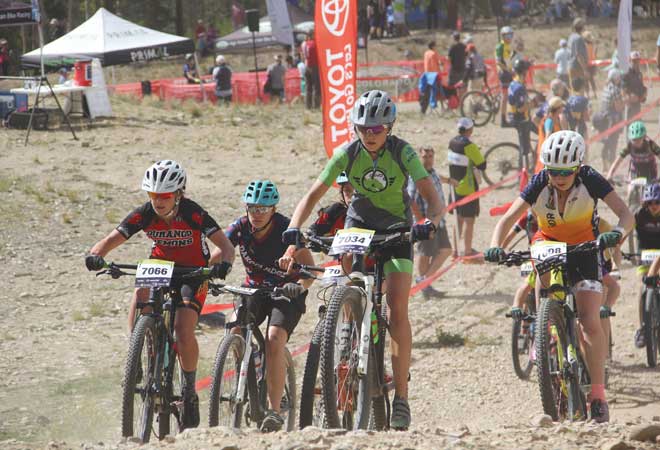 From the clouds to the desert

Riders on the CB Devo high school bike team continue to climb their way through the ranks as almost every rider moved up in the standings at their second race of the season, the Cloud City Challenge in Leadville.

At the first race two weeks prior, several of the Crested Butte athletes charged off the starting line only to suffer as the races wore on. This time they followed coach protocol a little closer, to remain strong all day.

“Most of the team rode too hard on the first lap that first race so we talked a lot about that,” says coach Torrey Carroll.

Nineteen athletes made the trip to Leadville to race on a course that works well for the Crested Butte riders. In addition, with no rain and the smoke cleared, the team managed to put in some quality miles in the weeks leading up to the race.

“We had a good couple weeks of training,” says Carroll, “and the course has a lot of fun singletrack on it, and it’s mostly in the shade and the altitude keeps the temperatures cool.”

The varsity boys headed out on course for four laps of race pace riding, resulting in just over two hours of pinning it. Robbie Oberling led the CB Devo varsity boys as he moved up eight spots from his first race of the season to finish in 19th place.

“He paced himself better and had really strong third and fourth laps and managed to pull away from the group he was riding with on the fourth lap,” says Carroll.

JC Patterson battled leg cramps to still improve on his result from the first race of the season and Liam Elliott stepped up a few spots as well. Josiah Tunkey made a comeback from a crash early in the race and Dylan Alagna came out of an illness, forgot his water bottle on the first lap but dug deep to finish out the race.

Olivia Gordon had another stand-out varsity race among the girls. She made a huge jump from the sophomore class to the varsity class this season, doubling the race distance but is settling into the new pace moving up five spots to place 15th.

While Gus Bullock had the top result among the JV boys, coming in 17th place out of 180 riders, Ethan Carroll made the biggest jump of the season as he moved up 32 spots from his result in the first race of the season.

The sophomore boys all jumped up in the standings with Otis McLoughlin leading the way in 13th place, while the young girls on the team continue to make a name for themselves on the circuit. Sophomore Lily Hanna moved up from fifth to third place for her second trip to the podium in as many races. Sarah Bivens finished with another second place just three seconds out of first and is one point away in the overall standings from taking the leader’s jersey.

In the end the team finished seventh out of 20 teams and is now preparing for their next race on Sunday, September 23 when they head to Nathrop for the Chalk Creek Stampede.

“It can be a really hot race, exposed, sandy with cactus along the sides of the trail,” says Carroll. “There’s not a lot of passing out on course but they all have pretty good start positions so it shouldn’t be too big of a deal.”