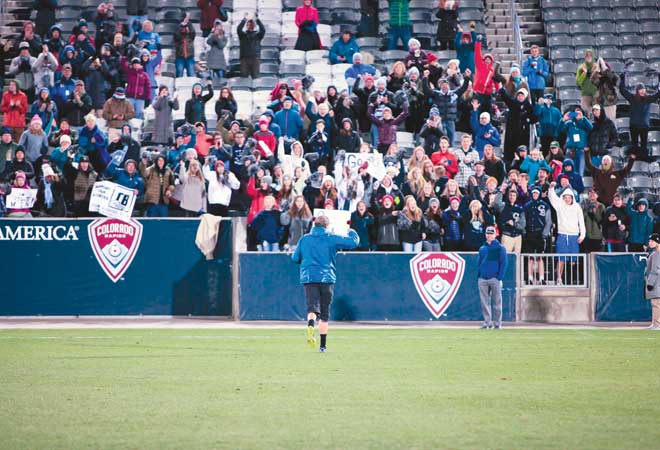 Honestly, a championship tastes even better when it’s over our sister town

This town has never needed a big excuse to hold a parade, but this Friday at 4 p.m. it has a pretty good reason to have one. The Crested Butte Community School boy’s soccer team traveled to Denver last weekend and came back as the new 2A state champion. They get an Elk Avenue parade.

A few quick notes on the weekend run that struck me:

—When Willa Emmitt was singing the national anthem before the start of the championship game at Dick’s Sporting Goods Park where the professional Colorado Rapids soccer team plays, the sound on the television at the school wasn’t fully working. Because the 60 or 70 people in the multi-purpose room could pretty much only watch as she sang and the Titans team stood with their hands over their hearts, the people who were gathered at the school stood up, took off their caps and started quietly singing the Star Spangled Banner. It was truly moving. And everyone who did hear her sing said Willa nailed it, by the way.

—The team took time in the mayhem after their victory to recognize school bus driver Bill Kastning in the locker room after the game. He has spent months transporting the Titans over mountain passes and through city traffic all season delivering our kids safely to and from their games. He would apparently act as a bit of a tour guide at times and the kids grew to appreciate his work, his knowledge and his contribution to the team. He was given the special Hawaiian “game shirt” that normally goes to the player of the game and Kastning wore it immediately. Maybe he hasn’t taken it off. That too was touching and speaks to the caliber and character of this particular Titans team.

—Than is the man who pushes a new flock of Crested Butte boys to become better men every fall. Than Acuff is the long-time CBCS high school soccer coach who has helped shape so many of the boys and girls in this community. He has made them laugh, cry and get mad. He has done the same with the parents. One of Than’s finest attributes as a coach may be that he treats his players as human beings, with respect and accountability. They are trying to figure out life. He is not a babysitter. He teaches. He is empathetic. He doesn’t suffer excuses but understands life circumstances. He is a blessing for the school and the community. Former players still refer to him as “coach” when they see him, out of admiration and deference for a life mentor. It is impressive to witness the impact he has had on the village’s young adults. He said this state championship was for every team he has had the honor to coach in his CBCS history. I know every former player feels pride in this year’s accomplishment. As usual, Than recognized the potential of the 2018 Titans and got the most out of a good group of local kids from Crested Butte and Gunnison.

Now, I must say that making the state title even better is that this team of chemistry beat archrival Telluride—a team that has for years given the Titans fits, depending on the season and the sport. This fall season belonged to Crested Butte as they beat the Miners three times. But the victory in that third game took overtime, and frankly, it doesn’t get any better than playing in a state championship game in a professional stadium and going to overtime—and winning.

This is where in a standard, politically correct commentary on the champs I’d say that just getting to the championship game was a great honor for two mountain towns and as long as the boys did their best that’s all they could ask for.

Telluride and Crested Butte have always had sort of a playful, love-hate sibling relationship. The two towns both take pride in being quirky and different and a whole lot cooler than, say, Vail. There’s a mutual chip on the shoulder over the similar Colorado mining town turned ski resort—Aspen—getting all the money, glory and fame. T’ride might be more Rasta while Crested Butte is more…blue collar real? Telluride was built on silver mining while Crested Butte was built on coal. T’ride has brick buildings and we have wood. It used to be that Crested Butte as a ski resort dominated in terms of skier visits and steep ski terrain. Then Oprah and Tom Cruise started hanging out in Telluride and the Forest Service let them expand and not us. Their summer festivals blew up and our festivals stayed under the radar, except for Vinotok. They quickly became Aspen Light and we slowly moved toward an Epic patina.

Speaking as the parent of two athletes who played Telluride regularly in soccer and hockey, it was always great to beat our sibling town. The old-school parents over there were sort of like us, while some of the newer ones with East Coast accents were what you might expect: Loud and irritating. Some of the kids (okay, on both sides) were cheap when it came to playing and so there was always a special delight in beating Telluride. It’s just the way of sibling mountain town rivalries.

So when during overtime a Telluride player gave a cheap elbow shot from behind to one of the Titans and Gaby Marmolejo took the direct kick and put it into the back of the net like a pro for the 1-0 overtime victory, it was great. There’s just something so prideful about small town sport rivalries.

Talking to Than last week (his desk is five yards from mine) he said that while Telluride was a good team, they had a tendency to lose their composure. He said if the Titans waited long enough, their rivals would get frustrated and lose their composure and that could lead to a W. And he was right. A really well-played soccer game from both sides tipped on a Telluride player losing his cool and making a dumb decision. We’ve all done it and usually the results are similar: Karma matters. If Telluride had won, there would have been some grudging sibling pride in that. But as it is, congratulations to the members of the 2018 Titan team that kicked some Miner butt in the state spotlight last Saturday.

After coaching hundreds of local kids, Than deserves that trophy and this team deserves a parade. And they’ll get one this Friday at 4 o’clock. Stop by Elk Avenue and tip your hat to the 2A state soccer champions.