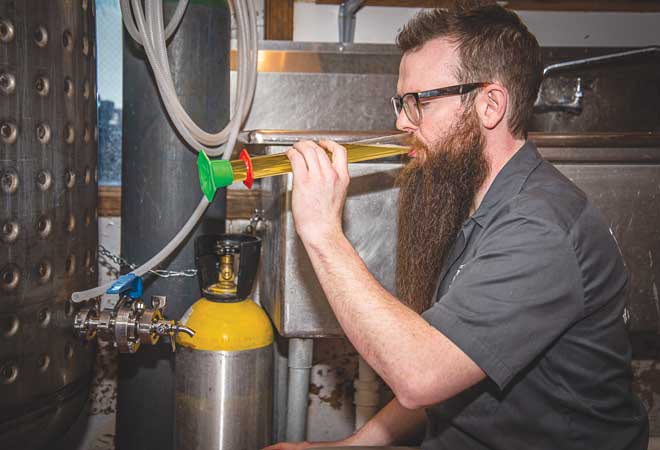 Chemistry—not the kind where two people hook up at closing time, but the science kind—identifies the substances of matter, its properties, interactions and the processes it undertakes to form new substances, like beer. Good chemistry makes good beer. Kevin Doherty is a beer chemist and the brewmeister cranking out the delectable brewskis at The Eldo. His long beard partially obscures an unmistakable broad smile that breaks out when he talks about his art, the craft of creating the perfect beers.

Born and raised in the Southside of Chicago with two older brothers and a younger sister (Bridget Doherty, who lives in Crested Butte), Kevin is from a family that grew up close and remains so today. Coming from a large Irish family, Kevin tells of the excitement of recently going to a family reunion in County Sligo in Ireland with 101 family relatives.

His parents own a rope manufacturing company but found time to take the family on road trips to various places and Kevin recalls, “Sports were a big thing in our family, skiing in the UP of Michigan, and visiting southwest Michigan where my maternal grandfather was living in a cottage by the lake.” Kevin played hockey, soccer, basketball, football, golf, and volleyball but he smiles, “Soccer was my main jam. It was the one I was good at.”

When he graduated from high school in 2007, he laughs, “I had no idea what I wanted to do. Having gone to an all-male Catholic school that was right next to the all-girl Catholic school, I wore a shirt and tie every day in high school. I found Colorado State University [CSU] from college promotional brochures and I loved skiing. We’d get a cabin with the family and go every year for a week. It was a big thing for me. I wasn’t a great skier but I loved the wilderness. When I was a junior in high school, my family flew out to Steamboat Springs. I was mind-blown. The skiing was unreal. It showed me how much fun it could be. So I went to CSU,” he says of his choice and from there, “All roads eventually led to Gunnison for me.”

At CSU, Kevin studied business communications, but with no real plan except “to ski and party with my friends and live the college life. I loved meeting people and going to concerts, which I went to every week. I ended up getting the Epic Pass and skied Summit County and Vail and every mountain along the I-70 corridor. It was our big goal over the weekends.”

He graduated with a BA in communications studies and a business minor in 2011 and moved to Gunnison that August specifically to study chemistry.

The impetus for taking on the commonly dreaded classes was—beer. “I got a job at O’Dell Brewing Company in Ft. Collins. I was a home brewer in 2010 and later that year my friend told me about an intern position at O’Dell’s. I wanted to work in a lab because at Odell’s, the brewers are the ones making the product but you have to have quality control at some point and the lab techs are the ones walking around in white lab coats and safety glasses with beakers in their hands, getting samples from fermenters, and getting yeast cell counts and viability, which is a health check up on your yeast. I was a dipsh*t 21-year-old hippie college kid and these guys were pros. Lab techs were legends. They were super cool and I wanted to do that.”

He was enamored by the process and by the beer community. “It’s beautiful,” he says of the culture surrounding brewing. “There’s a lot of passion and it’s very much family-esque, and coming from my family-oriented life, connection and bonding is very important to me. The reason I love brewing and being a musician is because of the community bonding that occurs in these niches. I love that about the two cultures I chose to get involved with.”

Once again, Kevin jumped into a “mind blowing experience,” that of being a science major and learning the fundamental building blocks of life through biology and chemistry. “Brewing science was so fundamental, the basic science, the bonds and reactions as you brew beer, it’s an applied science. Brewing beer is creating chemical reactions with the desired final product being alcohol but it’s much more complex than that. Chemistry books are like 1,000 pages of what life is and how we understand the physical world around us.”

In 2013, Kevin left the classroom for practical application of better beer through chemistry and went to work at the Gunnison Brewery, first as a bartender and then as their brewmaster. “I left my academic career in favor of experience and dedicating my time to the brewery,” he says of his wise decision.

When the Gunnison Brewery closed the following year, he moved over to High Alpine Brewery for the next two years. “I wanted to take my own path, write my own recipes and I wanted to grow, but I was only making the beer at High Alpine,” he says, explaining that he was merely following the creative and phenomenal recipes already established.

“I wanted to create my own recipes and grow as a brewer. It was tough to leave there because they’re some of my best friends and gave me the opportunity of being the head brewer, but this was a crossroads in my life,” and it was the chance he needed to take because he realized, “It’s all about growth.” He made that leap of faith in 2017 when he came up-valley to create and brew at The Eldo.

Completely reorganizing the brewery at The Eldo, Kevin’s tasty creations from his own recipes continue to evolve with beers on tap like Vanilla Coffee Porter and Study Buddy, and there’s the Snow Dance series, a SMaSH single malt and single hop (an acronym for the latter) which, he says, “highlights hop, the current is called Snow Dance SMaSh Series Volume III and the hop is named Mosaic, which is very popular in brewing IPAs. Everyone loves Mosaic,” he beams.

There’s a German pilsner cleverly named Live Long and Pilsner. The house ale is Eldo Ale. There’s a special brew just for the Eldo Hockey Club, which took last year’s town championship, named Powderplay. “I like to be a part of it because I grew up playing hockey and I want to give back to the community and share. I can brew beer and that’s my gift.”

Yes, anyone 21 and older can order the brew at the bar. You don’t have to play hockey to enjoy a cold one to honor the team.

During all the chemistry, brewing and tasting, in 2013 Kevin started his first band in Gunnison, Mahogany Splinters, a bluegrass group of all WSC students. He had picked up a guitar at the age of 16 and taught himself to play, and play he does. He’s an excellent picker and plays keyboards as well. “I had a high school band called Delayed Karma, a jam band, and I played summers between college semesters. To this day, these guys are like family members.”

Now he’s in three bands that play throughout the Gunnison Valley and beyond: Alternative People, the very funky Millk, and Floodgate Operators. “Probably one of the top moments in my life was when Millk was playing FIBARK in Salida. We played two sets on Saturday and Friday the Mahogany Splinters had played so it was a really big weekend. I was chilling after the gig when Robert Randolph tapped me to sit in with the Family Band in front of an audience of 5,000. It was totally by chance. It’s not like I’m a badass with a pedigree to be onstage with Robert Randolph, I was just in the right place at the right time. It all reaches back to the fact that I get to share music with people.”

For Kevin, music reflects the all-important bonding that he lives his life by, and with music he feels, “In a song, you’re connecting with the audience for that brief moment, it’s like gifts were exchanged. It’s so beautiful, it’s a small moment in a sometimes difficult life. My beer and my music are part of that. This is my gift and it gives me joy in return. My community helps me keep my compass. My purpose has become my life, and music and beer is my life. Through beer and music I give life back to others. In return it gives me a purpose and subsequently, it gives me life.

“I’m really happy. I like my home and I love my animals,” he says. He shares his home with a dog, two cats and six chickens. “I have a lot of friends here and I’ve made a name for myself that I’d like to believe is positive through good deeds and hard work. All these people that I’ve worked with here and throughout my life in various facets, from making a pizza at Mario’s to serving a drink to brewing beer to playing music to either one person or 200 (or 5,000), they’ve been part of my compass, they’ve helped me along the way and I feel super lucky and grateful for everyone in my life and they have kept my compass true to my overall motif, which is to find my gift and share it.”