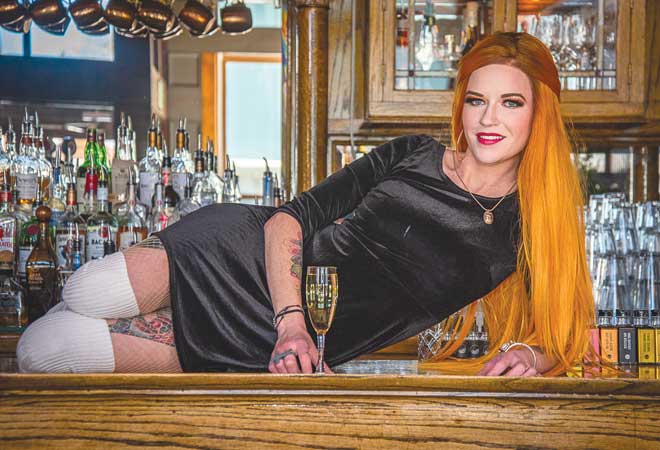 Malia Jones glides to the chair, with an inquisitive gaze and the face of a freshly picked flower framed by tresses of long persimmon-colored hair, and weaves an intriguing life story that has barely just begun. Although she was born and partially raised in Houston, her mother, Nancy Jones, moved Malia and her sister, Hali, to Crested Butte in 1998 when Malia was 13.

“I was going to a fancy private school in Houston, a really nice prep school with uniforms. Then I got to come here and be weird,” Malia smiles, thinking of her life of contrasts, and explains, “It was a disconnect. You had all this freedom here with no parental supervision. There was just trust between adults and children in Crested Butte.”

Although, she says, the adults understood that the kids were going to be free, all the kids understood that every adult in the community had their eyes on them. “Then I’d go back down to Houston where every moment of my life was supervised. It’s dangerous—you can’t go to the mall without a parent, and afterschool activities were supervised by a coach or a nanny. It was a big city and it was easy to get lost, or kidnapped, or taken advantage of. My dad would always tell me not to ‘get stolen.’”

When Malia was a child, her family always spent summers in Crested Butte, but to move here full time, she felt, “was great. I could dress in all kinds of crazy ways and be the most outspoken girl in my class. Growing up here was magical. The friends that I made that first year of school here remain my closest friends to this day.”

Well spoken and versed, Malia loved debate and participated in Model UN, which is a program where a pair of students are assigned a country to represent in mock international relations, such as trade agreements. She was also one of the founding members of the Crested Butte chapter of the National Honor Society, as well as in 4H. “I grew up riding horses,” she says.

Malia graduated from the Crested Butte Community Schools in 2003 and attended Tulane University in New Orleans, where she studied English because, “I was good at it, but then I fell in love with African and diasporas studies, which is the dissemination of African people across the globe. It was fascinating. I had always been interested in witchcraft and Wicca, so naturally being in New Orleans, I wanted to study voodoo. I learned that voodoo is from ‘Vodune’, which is Haitian and a mix of Catholicism and African Animistic religion.” Her curriculum also explored spiritualism as practiced by African Americans in the southern U.S., and voodoo and black feminism with regard to the relationship of those.

“I was studying possession and how culturally, women were allowed to be possessed in a divine way. We accept that women have a communion with the divine innately.” Malia graduated in 2008 with a B.A. in English and only one class away from a double major in African and diasporas studies. She would have stayed for that class but she wanted to come home.

It was the year Obama was elected and Malia and her mother were out campaigning for him. She had married and began having babies fairly soon afterwards in 2010. “I call it my five hard years. I was living in Gunnison and was really focused on being a wife and a mom. I was concerned about climate change, so I learned survival skills of canning, preserving, jerking, and I grew a full food production garden for the Brick Cellar in Gunnison. I found out that I hate gardening,” Malia laughs. “I like theoretical gardening more than physical. But I love cooking and I reconnected with that.”

One serendipitous day, as her marriage failed, she was transformed when on a friend date with Candice Bradley, she realized, “I kissed her and it was like two magnets snapping together. I could not part from her energy and remain whole. I was such a strong woman in my marriage and I always figured my strength could keep our marriage together despite its many flaws. I tried being a housewife and it didn’t fit,” she says of her seven-year marriage that gave her three beautiful children. “My son Jesse is eight, Cyrene (a family name) is six and my other daughter, Sahar (an Iranian name that means ‘the moment before dawn’), is four years old.” As their relationship grew stronger, Candice and Malia married in an auspicious Halloween wedding in 2016 and are raising their three children together.

Malia found her voice and herself once she moved back up to Crested Butte and freed herself of a stifling marriage. “It was like I blossomed again. I was finally able to be myself. It was like a whole personal renaissance.” She joined the Mountain Theatre board because, she smiles, “I was a theater nerd in high school here. I think Mountain Theatre is the reason I was able to understand myself when I was a teenager. It was only after abandoning that person and finding her again that I became myself on stage in Crested Butte. Mountain Theatre offers kids and adults the opportunity to not just experience art but become art and actively participate in a moment that’s completely intentional. That’s the coolest thing about theater, that it’s collective intention, it’s magic. When you create art you’re making magic. When you create food or written word or costume or makeup, you’re making magic and that to me is what craftsmanship is.” Malia remains on the theatre board as vice president.

When she moved up valley back to Crested Butte, Malia was waiting tables at the Brick Oven and was soon promoted to front of house. “I finally got to get out of the house and got to see my friends again! It seemed like everywhere I invested myself I was successful. I became president of the Mountain Theatre board, and created my sideline make-up business, Crested Beauty Queen. I had learned how to do makeup at About Face with Edie Gibson, the owner, who was a Bobbie Brown–trained makeup artist from NYC. It had been a hobby of mine, and the last couple of years, I explored drag makeup and wigs. We went to Drag Con, which is Comic Con for queens. It was so much fun. I learned how to glue wigs on, lace-front wigs, and do contouring. As I developed an interest in drag, my wedding makeup business flourished but I wasn’t doing exactly what I wanted to do.”

Malia utilized her talent and theatrical flair for the Mountain Theatre’s summer production of Hedwig and the Angry Inch, creating all the hair and makeup for the play. However, she’s closing her Crested Beauty Queen business and heading down another path that marries her bartending and customer skills with her ability to throw an incredible party. She and her two partners, Ayla Scott and Ian Scott, bought The Slogar, Crested Butte’s long-running and famous chicken shack, as the locals have affectionately dubbed it.

Malia remembers dining at the Slogar as a child. “I have fond memories of really snowy winters and family-style fried chicken dinners and I just want to make that place as fun as I remember it. I want to bring some New Orleans fare and flair with jazz brunches, drag brunches, and also have a parlor menu with small plates so you don’t have to commit to an entire fried chicken dinner.”

One of the innovative ideas the trio would like to engage is a reverse happy hour for cocktails. “From 8:30 to 10 p.m. we’ll offer happy hour cocktails and small plates. We’re all about themed parties, like a 1920s social whist party, which they did to raise money for rent in Harlem. You’d have a musician friend come play, serve bathtub gin, and everyone would throw some money into the hat for rent for the ‘joint.’ Another thing we’d like to do is have a Spaghetti Western Night where we show an old Western movie and serve spaghetti.”

Following in the dinner theatre theme there’ll also be murder mysteries, utilizing community theatre, of course. “We’re going to grow and expand on the chicken theme. By year two we’ll have an entirely different catering menu for events and weddings, onsite and off site. Ian is a classically trained French chef. Once he gets settled and we get the flow of service, we’ll offer a chef’s tasting menu paired with wine,”

Malia points out that they have the only level-two sommelier in town on staff, James Holton. “We’re going to bring an effervescence to a Crested Butte staple. I love The Slogar, I just want to make it sparkle like birds and bubbles the way it did from childhood memories. My goal at The Slogar is that the food is heavy but your heart is light.”

Of her lifestyle and choices, Malia feels, “As long as people are raised with an open mind, then they’re able to find partners that fit them. You don’t go into that with judgment. It goes back to when my father, Jay Jones, came out and I was 11, and I wasn’t shocked or scared because my parents had raised me to be accepting. I’m trying to raise my kids the same way.”

As for her chosen home, she knows, “The summers in Crested Butte are why I’m on earth. You can’t walk down the street and not feel your soul sing all the way to the tips of your fingers. It’s the air and the light, everything is beautiful around you and you understand that. It’s a law like gravity, like the earth is inviting me to celebrate with her and you can’t not be present in the moment. I love my band of weirdos here and it’s something I’m going to fight for in the face of development.”