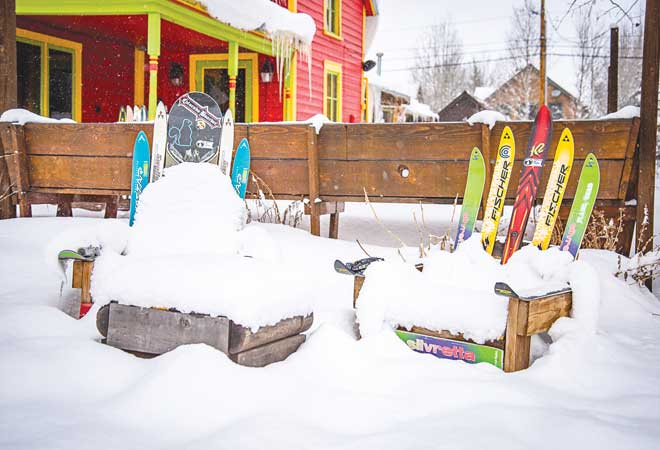 Solstice, the “Vail Bump” and the ADU conundrum

The solstice, any solstice, is a good marker for this mountain town. They come with celebrations and prayers. With this latest winter solstice, people feel a bit of hope as the days start to grow, shortening the long nights at 9,000 feet in the Rocky Mountains. The change won’t happen overnight and we are in the depths of winter but the turn has happened. The days are getting longer.

More light is not a bad thing. The long winter nights combined with the temperatures in the single digits can sometime be a challenge. I do like it that people light up trees and burn candles this time of year to provide a flicker of light. The night sky of winter is like a million Christmas tree lights and a true wonder to behold on a moonless night. As we move to a new year we do so with the knowledge that in this valley, winter is a time to play. The snow and cold bring us pleasure and economy. Many of us love what a cold deep winter can offer us in the mountains. That is not the case everywhere, so for that we can feel blessed. That too is a positive.

Moving into 2019 we do so with a new operator in charge of the ski area. New ownership is relatively rare at Crested Butte Mountain Resort but the change seems to always bring optimism. Or maybe it is less optimism and more anticipation of a new future. Before Vail, the Muellers and Callaways did what they could with what they had and we all got used to their comfort zone—which wasn’t always comfortable for everyone. The perception now is that Vail has deep pockets and a magic wand. But as the Silver Queen reality came into play with the main chairlift being down for a couple of days last week, it is evident the wish for a magic wand wasn’t answered and the new guys are getting used to some of the Crested Butte “magic.” I say give them time (a season) to figure out where Crested Butte and Vail can find a sweet spot between Crested Butte counterculture and a more traditional corporate model and hopefully we all will find comfort with an improved but still unique product on the ski hill.

In the meantime, some locals had expected there would be an automatic “Vail Bump” with the change in ownership. They envisioned hundreds of thousands of skiers who suddenly had a CBMR season pass through their Epic Pass coming to check out the funky ski area that hadn’t turned too commercial. That hasn’t happened. Long-term airline reservations, while gaining some recent ground, appear to be off from a year ago. RTA airline consultant Kent Myers said any bump in future reservations would probably come as a “Snowfall Bump.” The Tourism Association’s John Norton agrees. He said reservations for December and January are slightly down, while reservations for February and March are up. He admitted he has no crystal ball for this season but snow can’t hurt. Crested Butte/Mt. Crested Butte Chamber of Commerce director Ashley UpChurch is compiling estimated numbers for the near future. Her guesstimate is that the busiest days of the holiday season will be Thursday, December 27 through Sunday, December 30, with about 4,700 visitors expected each day.

A couple of quick thoughts on the town’s ADU lawsuit settlement that has more than tweaked some Crested Butte locals. Like a lot of people, my inclination is to say screw it, let’s go all the way and push the community’s intention all the way to the Supreme Court if need be. Screw people who sue the town and apparently want to undermine the community ethic that calls for people of all economic classes being able to live in Crested Butte.

But: When your team of lawyers expresses worry about the outcome of a lawsuit at the next level of court, there is legitimacy to consider settling—because if you lose, you lose more than two units. The ruling would impact another 41 properties with similar deed-restriction language and that is a legitimate thing for councilmembers to consider in the big picture. Was it the best deal? I don’t know, but the proof will be in the pudding down the road when the town spends that $550,000 on some form of affordable housing. I do know the town didn’t write the tightest ordinance when it came up with the deed restriction language 20-some years ago. So when council did decide to tighten it all up and started enforcing it, I can understand the feeling by the owners that it was a whole new deed restriction and not the original one with a tiny change.

Having said that, I don’t like that the two property owners who sued the town, John Kiltz and Christopher Mize, took that aggressive action that, like it or not, sent a message of “F the town’s obvious intention to get working people living in town.” I wish they could have sold their properties to people who would use the units to house workers. But what I wish doesn’t matter (See Vail magic wand wish above).

It did not go unnoticed that Mr. Kiltz listed the property associated with the lawsuit for $2.1 million about a nanosecond after the settlement was agreed to by the Town Council. I asked Kiltz about that and he said the house had been on and off the market for over a year and a half. “The ADU lawsuit kept it from selling,” he explained. “Now that the cloud is gone I want to sell the house. As far as property values go, that is not under my control but it sure seems like values are skyrocketing all over town—I guess because of Vail. I am definitely not leaving Crested Butte. I have another house in town I own that is one we plan to keep.”

So one lesson might be that if there is a “Vail Bump,” it has come in property values, not necessarily tourist numbers.

Okay. The days aren’t yet long enough to let all this roll off in a wave of positive light. But it is getting closer. Every day now will contain about two minutes and seven seconds of additional daylight. And that is positive.