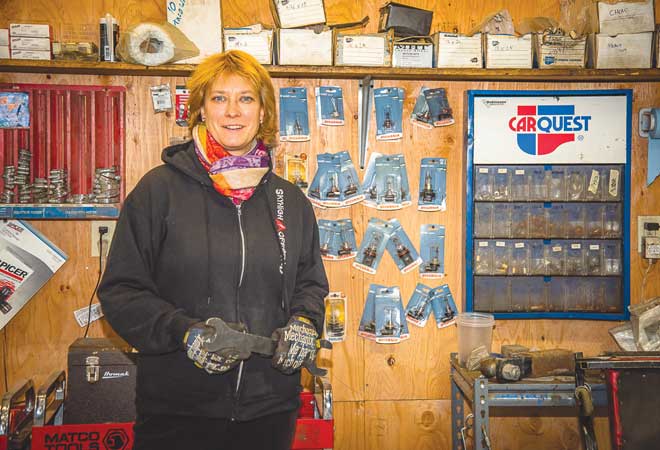 Ruth Dukeman has a phone wedged between her shoulder and ear while she juggles paperwork, clients coming and going, and car keys at the busy front desk of Skyhigh Offroad auto shop in Riverland. Her knowledge of automotive terms and maladies transcends office management, and she would herself be a mechanic but for the costly investment for all the necessary tools.

Born and raised in Naperville, Ill., just outside of Chicago, Ruth was a product of both Montessori and home schooling, excelling and graduating early at the age of 14. She had already begun college classes in high school when she officially enrolled at the College of DuPage.

When Ruth was a child, her dad worked on Jeeps and Corvettes as a hobby, “Because you had to have your Jeeps to go mudding and Corvettes for show,” she recalls.

“I was the eldest, so I spent a lot of time with him working on cars. I fell in love with vintage VWs, specifically air-cooled. I pushed home my first VW at the age of 13. I had bought it because I wanted to refurbish it so I would have a car when I got my license at 16. That started the obsession,” Ruth says.

By the time she was 16, she had four VWs, “and they were all in really good condition, because I was working on them. After I got the first one done I thought, that was fun, let’s do another. When I got ready to move I sold all four and bought my mom’s Jeep Cherokee, but it didn’t last long,” Ruth laughs. Her affinity for the German-made people’s car continued.

Ruth says, “I bought a 1972 green Bug. I drove it a lot, even in the winter,” and she grins that after moving to Crested Butte, “No one would ride with me from the hitching post because they wanted to wait for a car with heat.”

While in college, Ruth had started taking automotive classes, primarily to work on her air-cooled VWs, but also to get ASC (automotive service certification). She did not get to ASC because her instructor told her that she was too young to qualify, but, she suspects, “I think that was BS. I think he was intimidated by a woman taking those classes.”

Her father was also a private pilot and throughout her childhood, she says, “We’d fly out west in the winter in a little four-seat Cessna. Chicago weather was horrific so that’s why we got out.” Ruth recalls their adventurous escapes to the mountains where they’d also hike, bike, fish and go camping a lot during the summer. At the age of ten, Ruth began competition ski racing in the Midwest.

“Literally, we’d ski on mounds of garbage. They’d take refuse, cover it with dirt and make snow on it,” she explains of the man-made hills at the Four Lakes ski resort, which was the local ski area. Her racing led to freestyle skiing and it also brought her to Western State College (WSC, now Western Colorado University) to finish up a degree in communications and biology in 1991.

“I had never been to Gunnison,” she says. “I showed up in my Jeep full of stuff on Thursday evening and started classes on Monday. I came over Cottonwood Pass and down the Taylor and fell in love with the Gunnison Valley and I knew that I was home.”

Ruth remembers feeling a bit different since she was the youngest junior at WSC. “It was weird because I was already a junior but I was only 17 and I didn’t have to live on campus since I was an upperclassman.” She explains that she was a junior because her associate’s degree (from an Illinois community college) transferred to WSC.

Ruth had fallen in love with theatre while going for her associate’s degree because it was a welcome break from the intensity of her aquatic biology classes and other science courses she immersed herself in. She continued her theatre involvement at WSC, through the Gunnison Arts Center and the Gunnison Country Players. Ruth says, “I was looking for a college that had a good theatre program in addition to science and freestyle skiing,” the latter so she could pursue her talent in freestyle ballet skiing. Ruth trained with Ellen Breen, a freestyle gold medalist and she joined the WSC Freestyle Ski Team.

Another reason Ruth felt that WSC was the right choice for her was her interest in archeology and the opportunity to study with Dr. Mark Steiger. “It began as a personal interest. I did a lot of fieldwork with him, which is what I liked about Dr. Steiger and the program, discovering human history on the landscape. In Illinois, to get to 10,000 years ago, you have to dig about 50 feet into the ground but here [in the Gunnison Valley] it’s on the surface. We just don’t have the layers, the depositional composition here. Everything is on the surface. We started doing fieldwork on the top of W Mountain in the early 1990s. It led to the discovery of the 10,000-year-old archeological site on that mountain.”

Ruth had been part of the crew that started the process and discovered the village, and it was afterwards that the significance of the site was determined. She says, “There were fire pits, houses and a great deal of tools and debitage,” referring to the debris at the sites where stone tools and weapons were made.

When she first arrived, Ruth was attending her classes and working for Critter Sitters in Gunnison. In the winter she also began working at Crested Butte Vacations at Crested Butte Mountain Resort, where she met her husband, Casey Dukeman, who was also going to WSC to be a history teacher. “We ended up falling in love and got married a year later in 1994.” Their son, Jacob, was born in 1995, the same year Ruth graduated.

“My big picture plans were to go to grad school but that all changed as a mom,” Ruth says, but, with her WSC degree in organizational communications, she’s been managing businesses ever since.

After Jacob was born, Ruth worked in reservations at High Country Resort Services from 1994 to 1996 before moving the new family to Laramie, Wyo., in 1997 when Casey attended graduate school for archeology-geology, and later relocating to Greeley where Casey was hired as a high school administrator and teacher. Ruth was working in school servicing software and was on the road a lot during the four years they were there. They’d return to Crested Butte every summer to work on archeology with WSC. When the opportunity arose for Casey to teach archeology at WSC in 2003, they returned to the Gunnison Valley.

Ruth returned to Critter Sitters, and was also employed at Wells Fargo as a service manager. She eventually wound up as a clerk for three different departments, assistant emergency manager, administration for the wildlife conservation coordinator, specifically for the Gunnison sage grouse conservation efforts. She laughs that at the time, she had seven different bosses since she was working all these different jobs simultaneously.

In 2012, they left again, this time for Sheridan, Wyo., to chase gas and oil development money. Ruth had always been a recreational enthusiast, but in Sheridan she had the opportunity to get back into the automotive arena. “It was what I wanted to do. I was working as an outdoor recreational manager with a fleet of ATVs. We had three resorts on top of the Bighorn Mountains. I ended up meeting the owner of a Midas franchise, who wanted to hire me. I started out as front desk and wound up as his service manager,” she says of the perfect fit, because she knew so much about cars as well as running a business. She transferred that position to Ft. Collins, where they felt there were more opportunities, when they moved back to Colorado in 2014.

When the couple decided to go their separate ways, Ruth drove off looking for a place, she says, “that I never wanted to drive away from,” and found herself back in Crested Butte. As of last year, she has been working her dream job as office manager at Skyhigh Offroad.

“I still ski. I still have my VWs, a 1973 Super Beetle. Everything I need is here. I needed a place I could be outside. And I’ve got my dream job and now,” she says, adding with a big smile, “I’ve got my man.” She’s recently become engaged to TJ Becker. Of her path back to her chosen home, her reality check is a happy one. “These are where all my people are, my community, my family. It’s being home here.”