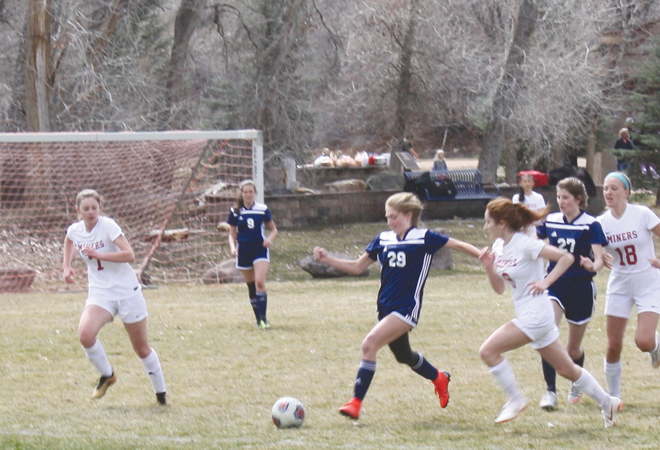 “It was all impressive”

he Crested Butte Titans girls soccer team had one of their toughest weeks last week, with three games over four days, all against tough opponents, and came away with two overtime wins and a one-goal loss.

“Our hope was to beat Ridgway and Telluride and our dream was to beat Salida too,” says coach Julia Kidd.

The team was back to full strength for the three-game stretch fortunately, and opened with a showdown against the Ridgway Demons on Wednesday, March 20. Due to field conditions throughout the Western Slope and mountain towns in particular, the two teams traveled to meet at Colorado Mesa University and were met with a huge field for their game.

“It was a gigantic field, biggest field I’ve ever seen and we started out playing flat,” says Kidd. “We looked terrible.”

Ridgway took advantage of the flat-footed Titans to open the scoring in the first 20 minutes of the game and take a 1-0 lead into halftime.

The Titans recovered from the doldrums and came out in the second half ready to play with the Demons and fight their way back into the game. Karina Davalos broke free 10 minutes into the second half to tie the game and the two teams remained notched in a 1-1 tie when the whistle sounded, forcing the game into overtime.

“The second part of the second half it became our game and we had the momentum for sure going into overtime,” says Kidd.

Neither team managed to score in the first half of overtime but five minutes into the second half of extended play, Rachel Potoker slipped past the Demon defense and onto a pass from Davalos and drilled it top shelf for the win.

“Those two are playing really well and bring some intensity to the team,” says Kidd.

Two days later, the Titans headed over to Salida to face the 3A powerhouse. Salida recorded big wins over similar opponents to Crested Butte so Kidd was expecting a rough 80 minutes.

The game opened as expected as Salida scored in the first minute but the Titans proved tough for Salida and spent the remainder of the game with a majority of the possession. Despite the play and effort of the Titans though, they never found the finishing touch and ended up falling to Salida 1-0.

“We had a momentary lapse and then dominated possession—we just never punched it through,” says Kidd. “It was the best game I’ve ever seen the girls play.”

Crested Butte closed out the crazy week on Saturday, March 23 against Telluride. The game proved to be almost a carbon copy of their game with Ridgway as flat play allowed Telluride to go up 1-0.

This time the scorers traded roles and Potoker scored to tie the game in regulation and Davalos netted the game-winner in overtime.

“It was all impressive,” says Kidd. “The backline is as solid as can be and Sophie Hall played great for her first year ever in net. Now we need to work on the little things.”

The girls continue to hold practices in the gym as they wait for the grass to come out in Gunnison. Their next showdown is with Center and Kidd is hoping to use the week and the game to continue improving their play off of the ball and building intensity.

“Trying to run some drills in the gym is becoming difficult,” says Kidd. “This week and the game with Center will give us an opportunity to get ourselves organized and use Center to work on things that we’re talking about on a bigger field.”