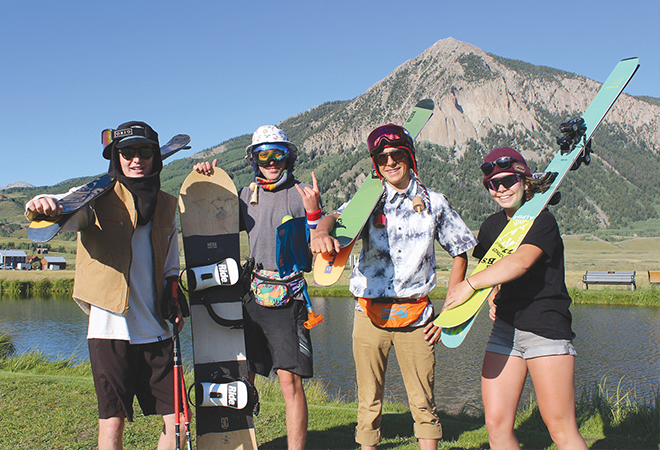 While it may be summer outside, four Crested Butte Mountain Sports Team (CBMST) freeride athletes received word that they have qualified for the Freeride Junior World Championships this upcoming winter.

The CBMST had an incredible season last winter as copious amounts of snow made for great training and they proved that on the national scene, racking up innumerable podium finishes as well as a stellar showing at the North American championships at Kicking Horse, British Columbia.

Eleven team members qualified for the event based on their results over the season and Kye Matlock and Avery Bernholtz led the charge for the local crew, winning the titles in the boys and girls 15-to-18-year-old age classes. Snowboarder Dagan Schwartz joined in the podium party taking third place and after an incredible season, Holden Bradford crashed in the final event but still took home the Flyin’ Ryan Hawks Award for his infectious attitude and passion for the sport.

While those results had all four athletes in line for the international scene, it wasn’t until earlier this month when Bradford, Matlock, Bernholtz and Schwartz all learned that they were officially in and are invited to compete at the Freeride Junior World Championships in Kappl, Austria at the end of January.

“I’m super stoked we have four athletes going,” says head freeride coach Will Dujardin. “I think it is really showing the strength of our program top to bottom from the coaching staff to the local energy and support. Many of these kids started U12s together five years ago and are now in a position to get points in an effort to qualify for the adult Freeride World Tour in a couple years.”

It’s not the first time CBMST has been on the international stage. Last year CBMST skiers JC Patterson, Carson Hildebrandt and snowboarder Schwartz competed, with Schwartz posting the top result coming in third place. Schwartz found the terrain and format at the event in Austria quite different from North American competitions.

“It s visual inspection only,” says Schwartz. “The runs here are more closed in with lots of rocks and trees. Over there it’s more wide open with a lot of vert. It’s fun on all of that wide open space.”

Bernholtz is in for something totally new as the first time she ever skied outside of the U.S. was last year.

“The only time I ever skied out of the country was at the championships in Canada,” says Bernholtz. “It’s amazing, I’m so excited. The big goal last year before the season started was getting invited to worlds. It’s hard to wrap my head around it but I’m thrilled.”

All four may be going into the Junior Freeride World Championships a little green due to the scheduling, which may make the event their first comp of the season. Nevertheless, Schwartz believes he and everyone have a shot at winning.

“It definitely gives me sort of an advantage since I know what to expect and what to look at,” explains Schwartz. “But everyone that’s there has a shot. It’s anyone’s game for sure.”

Right now, the invite is in and the training program set to begin before the season starts. Once the snow flies, the last thing standing in their way is the cost of the trip. As a result, the athletes have set up gofundme.com/cbkidsfreeride to help with their dream to compete on the world stage in January 2020.