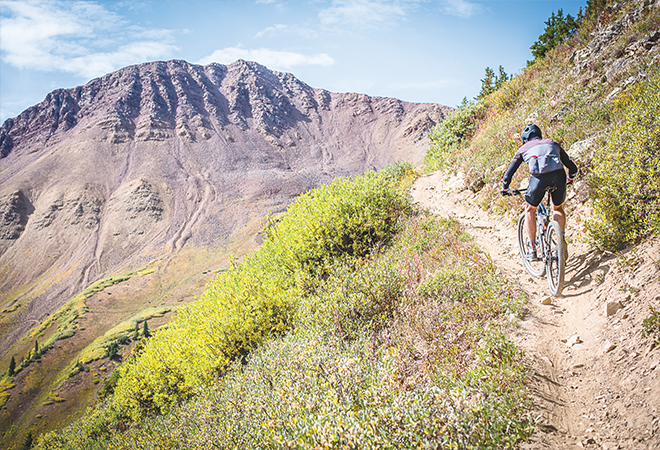 For the sixth year in a row, close to 500 athletes will toe the line for the North Face Grand Traverse Mountain Run and Bike on Saturday and Sunday, August 31 and September 1. They are the summer versions of the classic winter race as runners on Saturday and bikers on Sunday will join the two towns via the same route as the winter race.

Crested Butte Nordic is the brains behind the operation and since starting the summer races, the event has grown to the point where both the running race on Saturday and the bike race on Sunday are near capacity.

The weekend kicks off at 6 a.m. Saturday as nearly 150 runners will line up in downtown Crested Butte in front of the post office, bound for Aspen. Once they leave town they head onto the Upper Upper Loop to Brush Creek Road and the Canal trail before heading even farther into the mountains, making for great spectating in town and just on the outskirts.

“There’s good energy at the start and we like to get lots of people out to spectate,” says Arell. “Plus, we will have Marcie Telander, the maintainer of the Divine Spirit, there to give the pre-race blessing.”

The run ends with a descent down Aspen Mountain before finishing in Ajax Park.

“That descent down Aspen Mountain is a punisher on the thighs, so I have heard,” says Arell.

Then, the bikers take over on Sunday, leaving Aspen at 7 a.m. and climbing all the way up Aspen Mountain to start the race off with a bang.

“It’s 3,000 feet of climbing over five miles so that can separate the contenders right away,” says Arell. “The mountain bike is no joke—you gotta bring your A game from the get-go.”

They will then ride the very same course, only backwards. But instead of finishing in town, they will finish at the base of Crested Butte Mountain. Based on past years’ times, the leaders are expected to cross the finish line on or near 11 a.m. And, thanks to funding support from the town of Mt. Crested Butte, racers and fans will be greeted by live music from Boulder-based reggae band Policulture.

“We’re throwing a party,” says Arell. “We want to invite the public to partake and celebrate the accomplishments of these athletes.”

While some folks choose to do just the run on Saturday or just the bike on Sunday, more than 70 athletes will line up for both races in a quest for the dual sport title. Furthermore, there are 30 individuals vying for the Triple Crown title, which includes their overall times from the winter race last March and the two races this weekend.

As of current standings, Cam Smith is in the lead for the men’s Triple Crown title, with Brooke Warren on pace to take the women’s title. But the run and bike races are long and anything can happen out there in the mountains.

With the Triple Crown title rife with prestige, the runners, bikers and dual sport athletes will be vying for some cold, hard cash, with over $3,000 in prize money up for grabs.

If you have been thinking about jumping in, go to thegrandtraverse.org for course information and registration.