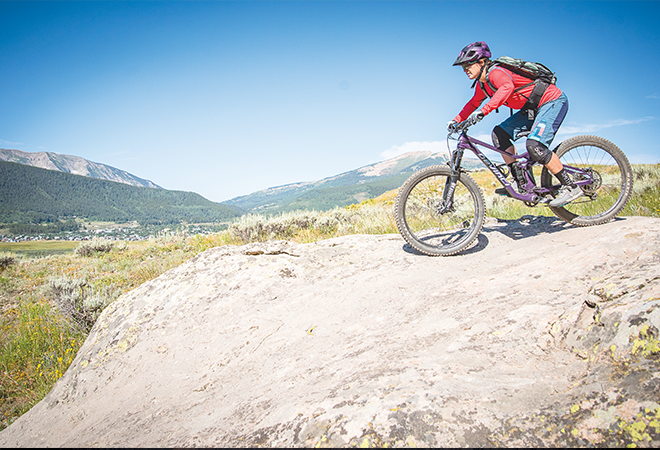 “Dirt is my church,” Amy Nolan confesses joyfully, fully recovered from a strict Catholic upbringing in Dubuque, Iowa, where she was born and primarily raised for most of her youth with one younger sister. Growing up in the Midwest, Amy recalls, “We lived at the outdoor swimming pool. We had banana seat Schwinn bikes and we would ride those to the pool every single day. We were pool rats, sunburned and eyes stinging with chlorine.” She fondly recalls the summer life that she and her little sister enjoyed.

“Mom would take us to play miniature golf—the course was off the real golf course and mom liked to play. My mom was also into gardening and I gardened with her. You could grow anything in the Midwest. I loved it. I still try my best, with everything working against me up here in the short gardening season,” Amy says of nurturing plants at elevation.

“In the winters, we didn’t have access to skiing or any real winter sports but we did a lot of sledding. We had an amazing neighborhood with a ton of kids. We just played in the streets. We were free-range kids. Our only rule was that we had to be home before the streetlights came on. Mom was strict. We got spanked. She worked hard, full-time, and we were expected to follow the rules.”

As a hard working single mom, Amy’s mother was a telephone operator with Northwestern Bell before it became AT&T. “She had this amazing ability to remember numbers and names,” Amy says of her mom, and Amy’s grateful to have also inherited that skill. Even though Amy’s mother worked long hours, she never missed her girls’ events or activities. Amy was an avid competitive runner throughout school, with many cross country and track meets.

One evening, after Amy had run one of her cross country meets, she heard her mom fall in the kitchen while making dinner for the girls. Rushing in, Amy found her mother unconscious on the floor and immediately called for an ambulance. Her mother regained consciousness after what was diagnosed as a stroke caused by severe heart damage from rheumatic fever as a child. Her mother was severely paralyzed physically and in speech. Multiple strokes followed and had Amy’s mom on life support. In the course of a few weeks, at only 36 years of age, Amy’s mother passed away. Amy was only 14 and her world was turned inside out.

“When my mom died, I was a freshman in high school and I was a really strong, talented runner. I had qualified for state championship in cross country, which was happening just days after mom died,” Amy says. Much to the surprise of her coaches and teammates, Amy competed and took second place at state, “because my mom would have wanted me to be there and compete. Also,” Amy says, “I was in denial of losing my mom. I hadn’t fully comprehended what had just happened. It was pretty quick, maybe a month from the time of her stroke to her death. The funeral was after the meet and my mom was buried with my medal.”

Amy moved in with her maternal uncle and aunt in Cottage Grove, Minn., just outside of St. Paul. “I was very much a tomboy, and my aunt was very much fancy, always put together and dressed up. I lived in jeans, sneakers and t-shirts. My aunt insisted that I wear tights, dresses and dress-up shoes,” Amy grimaces. “She wanted somebody to shop with.”

So of course, Amy rebelled. “I refused to wear any of the nice clothes they bought for me. I was just a normal teenager with a chip on my shoulder,” she says, and she was still trying to cope with her losses and subsequent life changes. She immersed herself in running track and cross country throughout her high school years and graduated in 1992.

“The only thing I knew is that I wanted to get away from everything, to get out and be on my own. I didn’t really know what I wanted to do but I knew I wanted to continue track and field,” Amy says. She enrolled at Luther College in Decorah, Iowa, a small liberal arts school, focusing on science, which she loved. Amy was thinking she might pursue dental school, but a brief internship at a dental office during her sophomore year ended that romanticized notion. “I got so grossed out by observing cleanings, root canals and just mouths in general,” she says, and wisely concluded, “This is not for me.”

But she found college to be amazing. “I worked hard in jobs and school. I had great friends. I had a work-study job in the administration offices to help the coaches with recruiting and the PE teachers with office work. I had an amazing relationship with my cross country and track coach, who really helped me in moving down a positive road with accepting my mom’s death and getting healthy. It was a small campus where everyone knew each other and there was a real sense of community, not only within the college but the town.” Amy graduated in 1996, earning a BS in biology with a minor in physical education.

Like most college grads, Amy had a ton of student loan debt. She says, “I wanted to do something different to be able to pay off as many student loans as I could. I saw a posting for a live-in nanny in Montebello, N.Y., about 45 minutes north of New York City. I lived with the family for a year, all expenses paid, so everything I made I put into paying off my loans. One of the benefits of the job was to go to the Atlanta Olympics in 1996, because the mother worked with NBC Sports, which was doing the broadcast. I traveled with them to take care of their four-year-old son while the mother was working.”

It was at the Olympics that Amy’s interest in mountain biking sparked. “It was the first year that women’s mountain biking was an Olympic sport. I had never freakin’ mountain biked in my life!” but she was smitten. “There were three really strong American women at the time, one of whom lives in Gunnison, Susan DeMattei. Just watching those women was so inspiring and I thought, this looks like fun. I got my first mountain bike in New York, started riding the trails there and did a couple of fun races.”

One of her good friends who was living in Denver invited her to visit. When she returned to her nanny job, she immediately started making plans to move to Colorado, researching different places and jobs. “I wanted to be someplace there was mountain biking,” she says. She bought a car, found an apartment and a job driving a concessions golf cart in Colorado Springs in May 1997. But when she actually arrived in the Springs, she hated it.

Amy recalls, “I didn’t like my job, didn’t like my apartment and I didn’t like Colorado Springs.” She immediately began looking for an alternative living and work situation and discovered Manitou Springs. Amy was hired at a family-owned outdoor gear store, Mountain Chalet. “I met fun rock climbers who got me into that sport, along with backcountry skiing, backpacking and mountain biking.” She stayed there for three years, mostly getting better at rock climbing.

In 2000, Amy did what she calls “the obligatory move to Boulder. It was a good fit for my lifestyle. I worked at the Med, a Mediterranean tapas restaurant. It didn’t take me that long to figure out Boulder wasn’t going to work out. I was always out of money and Boulder was very much about the ‘haves.’ I didn’t feel it was ever going to be my place. It was a rat race. I wanted to be in a mountain town.”

One of Amy’s climbing partners told her about Crested Butte. Back when she was working at the Mountain Chalet there was a whole posse of people who came to the popular (and now sadly defunct) free skiing in Crested Butte, “so I just came with them. I had never skied and my friends were going to teach me to telemark.” Two years later, in 2000, her friend took her climbing up the Taylor Canyon. “I came into town, walked around and I vividly remember thinking, this is Colorado, this is where I want to be.”

While looking for jobs she met Mary Haskell of the Alpineer, who hired her. Amy arrived in April 2001. “I remember being super gung-ho on spring skiing. I was still climbing, but working at the Alpineer I had access to bike rentals with new bikes. I got eaten alive with the riding,” she laughs of the learning curve. “Just the climbs, crashing with clipless pedals, meanwhile everyone at the Alpineer had been riding for years.” She had some catch-up to do but, she says, “I jumped right in and learned fairly quickly and ditched my climbing gear for mountain biking.”

She met her hubby, Mike Nolan, at the Alpineer in 2002. “He was in a sling, having had shoulder surgery and was looking for telemark ski boots. I didn’t know anything about him except he seemed really nice, but we were both seeing other people at the time.” The following winter, they discovered they were both free and started dating after Amy and friends showed up at the Elk Mountain Lodge hot tub, where Mike was working at the time. They married in 2006, after living together for several years. Their son Eli was born in May 2006, followed by Ty in 2008 and sister Finley in 2010. They now own the Elk Mountain Lodge.

“I feel really lucky to have the opportunity that my mom never had as a single mother, to stay home and raise my kids, being able to be with them so much and home when they get home from school, spending the time when they were really young. I think the flip side and the challenge for me now is that, when I lost my mom, I was almost the same age as Eli. I think there is that tendency for me to think I need to give my kids everything that I was never able to receive from my mom at that point my life, because she wasn’t there,” she says of her mother’s passing. “I can’t project that loss onto them by being a helicopter mom. I’m very engaged and involved in their lives but I need to let them do things for themselves and not feel like I have to always be there. What better place to do that than Crested Butte?”

In 2014, when her youngest, Finley, was four years old, Amy was ready to do something to contribute to the community. She started Crested Butte Devo, a non-profit youth development mountain bike program. Devo is a shortened version of “development.” Crested Butte Development Team is helping kids become excellent cyclists, responsible trail guardians, teammates and community members through its programs. “It was created to give the youth of our community a fun and safe outlet to explore the amazing mountains of the Gunnison Valley by mountain bike. Our main focus is to create lasting memories and provide each rider with not only superior bike handling skills but life skills that they can carry into their adulthood.”

“I’m still in love with living in Crested Butte. I feel like even in spite of all the changes that we’re seeing locally, this is still a really magical place to raise kids and call home. Our kids are passionate about riding and are fearless. They love the adventure and have great attitudes. They’re Crested Butte kids and sometimes they scare the crap out of us and we look at each other and think, we have nobody but ourselves to blame for getting them into this.”