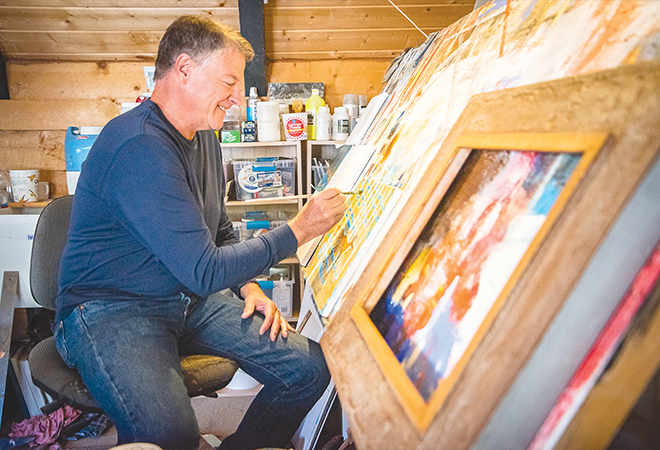 Going with the Flow

“I’m a hopeless experimenter,” artist Michael Mahoney grins from his upholstered chair in the corner of his studio, surrounded by windows and light. Outside, Coal Creek rolls and tumbles, singing its way through town. Canvases in varying styles, composition and color lean against aged-wood paneled walls. More work is propped up on tables—large wildlife illustrations, paintings of magpies in flight and foxes chasing through the woods.

“The thing people say about artists is that their style changes,” says Michael, although he clarifies that artists can still paint in the same style, should they choose to. “Picasso could have painted classically if he had chosen to, but he didn’t.” Art style, he says, has a lot to do with choice.

“When somebody is a studied long-time artist, they move into different things—you change, you grow.” Michael says, as recently as the 1960s, colleges weren’t actually teaching art. Although there were courses, the student didn’t really learn how to be an artist. “You had to apprentice with an established artist,” he says, to develop and learn technique. “da Vinci painted under Verrocchio, who, after seeing da Vinci’s work proclaimed, ‘I will never paint again.’”

Michael is a self-taught painter, but confesses, “I’m such an enigmatic goofball. I never apprenticed. But nowadays there’s so much info available.” As he learned his art, Michael utilized illustration magazines and communication arts magazines, “Because illustration design and marketing is where I came up from. I was that kid in school who drew all the time.” In high school he was not only president of the student art club, he was also the captain of the football team.

Michael was born and raised in Billings, Mont., where his dad was a banker and his mom was a homemaker. Michael’s childhood was spent wandering around in the hills with his younger brother, “Fishing, shooting things, a river runs through it kind of thing,” he recalls. “As little kids, we were fishing all those rivers that everyone wishes they could. I didn’t hang out with my friends every summer. I went and stayed with my grandparents in Cheyenne, Wyoming until I was 13. My paternal grandmother was a talented amateur painter and she taught me how to oil paint when I was seven years old,” he says, even though his parents never encouraged it.

“They were from that old school of thinking where art wasn’t something you did as a living. All the Impressionists—Monet, Matisse, Cezanne—hardly ever talked to their dads, who were all so mad at them for painting,” Michel says.

Michael points out that art has gone through drastic phases since the Industrial Revolution, much of the change brought about by the advent of the camera.

“When the camera showed up, it took away most of what artists did at that time. They were portrait painters. If you wanted a picture of anything you had to hire an artist. Being an artist was an honorable profession in society. The camera brought about Impressionism because artists had to find a way to express something that the camera couldn’t—they had to learn how to paint emotions. Technology took away their bread and butter so they had to find something that the bourgeoisie would enjoy and, more important, buy.”

Michael graduated from high school in 1977, knowing he wanted to make art for a living. His medium at that time was primarily watercolor and his work was already in galleries. Even in high school he was exhibiting in young artist shows. “I avoided art education on purpose because it seemed to me that in most cases art teachers were teaching students how to be art teachers. And then once I felt I was an accomplished artist, I started studying all the great painters because I was fascinated as a peer,” he says. Michael related to those artists and felt he understood what they were experiencing.

“Nobody talks about how, in history, Monet was affected by the market,” Michael says. “The Impressionists were actually concerned about the future of art and felt they needed to create a new market. Manet had the ideas, but he really didn’t paint like the Impressionists. But he had the ear of the bourgeoisie and he saw what was happening; he saw what the camera was causing. The Impressionists weren’t just mindlessly doing this—they felt like they were saving art and it was a grand thing they were doing.”

In the early 1980s, Michael became a graphic artist and freelance illustrator, creating his own company, Advertising Design, with a partner. Michael was primarily the illustrator and his partner was the designer. “Then computers came along and, like the camera, it was going to completely take over design—and it did,” he says.

Michael thinks artists underestimated just how much computers would infringe on hand-drawn illustration. Computers, he says, took over design right away with a 15-year lag that slowly saw them catching up to illustrators as well.

“My heroes at the time were the New York and Chicago illustrators, who were doing the greatest art anybody’s ever seen. Graphic illustrators like Seymour Chwast and Herb Lubalin. That entire culture is gone now,” he sadly notes.

Michael went to work for a designer in Missoula who did a lot of interpretive work for the U.S. Forest Service. For a decade through the 1990s, he became an interpretive illustrator for wildlife and habitat, Trout Unlimited and the Nature Conservancy as well as other outfits.

During this time, he was living in Billings with his wife, Pam, and their four kids. The couple met in a church group, married in 1981, and had their daughter Bethany in 1982, John in 1984, and the twins, Mary and Marshall, in 1988. “My kids are my biggest commitment,” he explains further, “I’ve always liked commitment, it’s a joy. I like sinking my teeth into commitment.”

Bethany moved to Crested Butte in 2005 with her hubby, Tyler Harpel. John moved here afterwards with his wife, Conni. When the grandkids started arriving, Michael and Pam followed in 2013 to be around their family. Pam has been the financial secretary at Crested Butte Community School since 2014.

Michael moved out of illustration because the market for hand illustrating faded away. He focused on gallery paintings and shows. When he arrived in Crested Butte, he jumped right into the thick of it, renting a storefront gallery on Elk Avenue for four years before moving his studio upstairs in the creekside building behind Bonez. He also shows at the Redline Gallery on Elk Avenue.

Michael defines his style as “representational abstract.” Of his painting technique he says, “It’s always got a subject but I paint until something happens,” which he also describes as “Go with the flow painting. I start with a good drawing since I’m kind of a design freak and then I paint abstractly around it, through it, and in it.”

He describes himself as, “mostly like a frustrated philosopher that can draw. If you look at my paintings with that in mind you can see it, I think. The way I paint and build my frames has a lot to do with a mild rebellion against prints and machined frames.

“I relate to Will Rogers, the uneducated hillbilly, except I’m from Montana,” he laughs.

For Michael, Crested Butte is not only stunning and crazy beautiful, it’s closer to the kids and grandkids. “I moved from the Big Sky country of Montana and this area is real similar to that. I have a multifaceted love for here. I like winter. I don’t like hot weather. I like shoveling snow. I’m a board member of the Artists of Crested Butte [formerly Artists of the West Elks]. We do the Arts Walk and the art market adjacent to the Sunday Farmers Market during summer and fall.”

As for his chosen career in the field he loves, he says, “Artists never retire, I’m not a planner at all and I don’t have a plan.” He just goes with the flow.