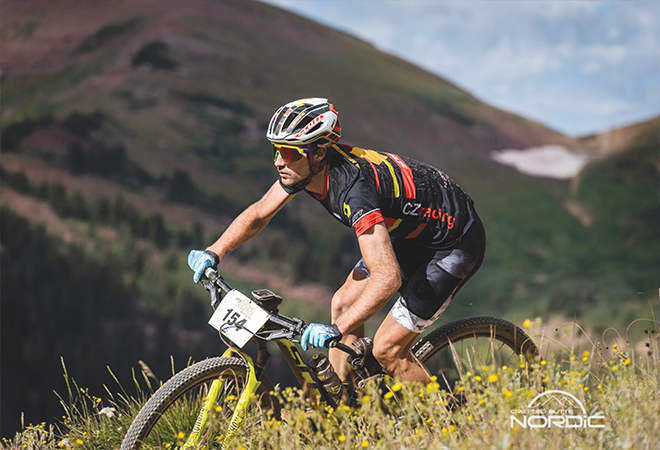 It was a stellar weekend for a race, two races actually, as nearly 400 athletes jumped into the North Face Grand Traverse Mountain Run and Bike presented by CB Nordic over the Labor Day weekend. In the end, two new course records were set and the two races were virtually free of any major carnage, making for one of the best summer Grand Traverse weekends in the event’s history.

“It really was one of the most streamlined Grand Traverses to date,” says CB Nordic events director Andrew Arell. “Some people took a slight detour off course but in terms of medical emergencies, there were none that I was aware of.”

Early-morning Saturday, August 31 more than 200 runners lined up in front of the post office in downtown Crested Butte, bound for Aspen via a 40-mile course complete with two mountain passes, Star Pass and Taylor Pass, before dropping down Aspen Mountain and into the heart of Aspen.

Cam Smith was the standout on the day as he charged his way through the entire course, eventually crossing the finish line in a new record time of 5:39:19, beating his old record time from last year by almost 20 minutes. While Smith admits he wished he knew why he was able to run so much faster this year, he does have some idea of what led to setting the new record time.

“It definitely helped having a lot of competitive runners in the field this year,” says Smith. “And this was my second time running the race so I knew more about what to expect. I like to think I’ve also gotten a little fitter and a little faster.”

The women’s race was a lot closer, as former Olympic Nordic skier Liz Stephens won the race just a little over one minute faster than Caroline Tory in second place.

“The Aspen finish was a highlight,” says CB Nordic’s Arell.

The very next day, 172 bikers rolled up to the start line in Aspen—some of them had run over the day before—to then head back to Crested Butte via the same course. Only thing was, the bike race starts with a 3,000-foot climb up Aspen Mountain and with the recent spate of dry weather, conditions were less than favorable for competitors.

“It’s a brutal start in any conditions,” says Smith. “Having it sandy made it even tougher for sure.”

Ryan Petry seemed unfazed by the conditions there, or anywhere, on the course, as he was next to set a new course record, riding to the win in a time of 3:57:10. Meanwhile, Marlee Dixon rode her way to the women’s title, covering the course in a time of 5:16:27.

“Everything was working, bike was great, but it didn’t go as good as I hoped,” says Smith. “Some days you just don’t have it. Saturday I had it, Sunday I didn’t. It was still nice to be out there and enjoying the advantage of having wheels.”

Arell is now looking forward to the next event, the Nordic Thanksgiving Camp. It is his hope to continue building the summer races as well and hopes that they reach their limit next year so he can apply for a new permit to keep the two-day race event growing.

“The mountain bike numbers were way up,” says Arell. “We want to reach our capacity on race day before we start thinking about putting in for a larger permit.”