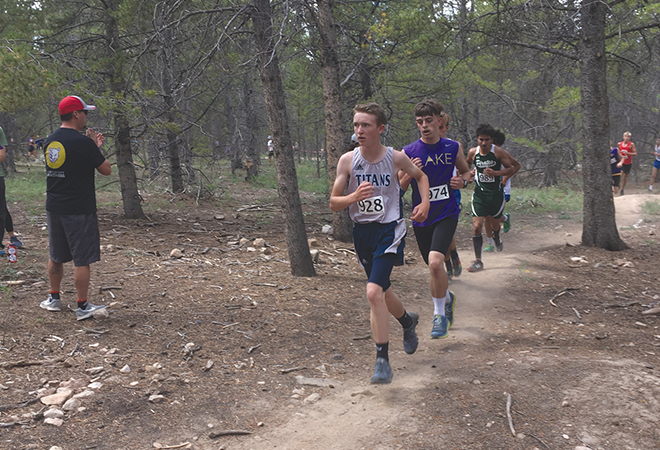 Hosted at an elevation of 10,500 feet, the Lake County Invitational cross-country race is always a gut check for athletes and a tough way to open the fall season. Nevertheless, it also provides an opportunity to put the runners’ three weeks of training to the test and see where they stand. On Saturday, August 31, six Crested Butte Titan runners headed to the notorious course, with a handful left behind due to illness and common sense training.

“There are a couple of runners new this year and we wanted to make sure our new runners had more training before jumping into their first 5k of their career in Leadville,” says coach Shari Sullivan-Marshall.

Good thing too, because, as it turned out, the course was changed for the race this year, making an already hard course even harder. While the first mile of the course opened rather gently for the athletes, the second mile put the wood to participants. They finish the entire race with one last uphill to the line.

“It was pretty brutal,” says Sullivan-Marshall. “It was literally almost all uphill that second mile. You pretty much just survived that last uphill to the finish.”

As the Titans prepared for their race, the six in attendance dropped to five as one runner got sicker throughout the warm up with a fever. Another runner started feeling the effects of illness as well yet still ran, albeit in survival mode.

Porter Washburn led the team over the course of the race as he carried his momentum and strategy through all five kilometers to finish in 31st place, with Cormac Billick not too far behind.

“They both ran really smart and tactical,” says Sullivan-Marshall. “Also, they both ran faster than they did last year in Leadville and on a tougher course.”

Logan Utz made his way through the race with a rough go in the second mile section but came back to finish strong, joined by Jude Eaton, while Yvon Michel fought impending illness to cross the line.

“This gave us a good indication of who they are as racers,” says Sullivan-Marshall.

The team should be close to full strength as they head to a new race in Alamosa on Saturday, September 7.

“I think it’s going to be a good one and I’m excited for something different,” says Sullivan-Marshall.